In a comment on a post the other day about a movie starring Tom Berenger, reader Barry Lane took issue with a critic (not me) who spoke rather slightingly of Mr. Berenger as an actor. I didn’t know much about this actor so I decided to watch another Western he led the cast in, the TV movie The Avenging Angel, which is also interesting as being the last outing in the genre of Charlton Heston. 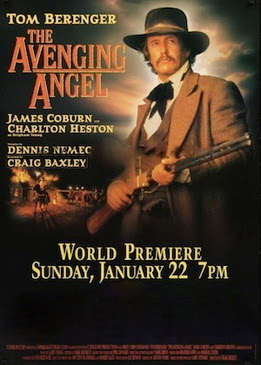 It’s a ‘Mormon’ Western and as you know there’s quite a tradition of these, dating probably from Zane Grey’s 1912 novel Riders of the Purple Sage and its many subsequent filmings. Grey was quite anti-Mormon in his writing, at least in that book (less so in its sequel), and the Mormons are definitely the villains of the piece. Celluloid versions tended to be more cautious about this, and sometimes excised Mormonism completely from the tale, having just generic bad guys. Later movies were either pretty weak pro-Mormon whitewash such as Savage Journey or fairly tough anti-Mormon stuff like September Dawn, also not good as a Western. John Ford’s Mormons in Wagonmaster were cheery folk who stopped their wagon train every ten miles to have a dance.

Now I'm not a Mormon, nor do I hate and despise Mormons. I have no axe to grind in this debate. But I do think film makers have a right to make both pro- and anti-Mormon pictures, as long as they are not gratuitously offensive, especially if they are historical and the point of view can be backed up in some way, by some interpretation of history.

The Avenging Angel tells the story of an 1870s plot to kill Brigham Young (played by Heston), and we see goody Mormons and baddy ones, both. Although Berenger plays the central character, Miles Utley (fictional, as far as I know) who is a “Danite”, or assassin employed by the Mormon high command in Missouri in the 1830s to eliminate people they saw as threats - and indeed he unceremoniously slits the throat of a prominent critic of the elders in the first reel - he is still portrayed as essentially one of the good guys. Wikipedia tells us (so it must be true) that “There is no evidence that the Danites existed after 1838. However, they remained an important part of Mormon and non-Mormon folklore, polemics, and propaganda for the remainder of the 19th century.” Certainly many former Danites (let’s call them that) occupied prominent paramilitary or law enforcement roles in the new settlements in Utah. 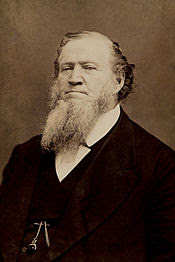 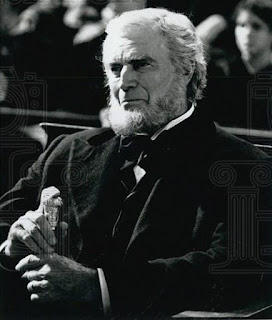 One of these was the famous Orrin Porter Rockwell, known as the Destroying Angel of Mormondom, and perhaps that’s where this movie got its title – the idea that these gunmen were acting violently in defense of the faith and its leaders. Disaffected and dissenting ex-Mormon Ann Eliza Young (1844 to 1917), one of Brigham Young’s 55 wives, stated that Rockwell gained fame as one of Young's “Destroying Angels" – though no reference to the existence of such a group can be found outside her writings. Rockwell was certainly one of the most colorful characters of the old West. I was talking about him back in March 2015 when reviewing Craig Johnson’s novel A Serpent’s Tooth (click the link for that), in which he features. He also is one of the lead characters in Leo Gordon's novel Powderkeg, which I am reading at the mo and will be reviewing soon. In the movie he is played by the excellent James Coburn. He tells how Joseph Smith, whose bodyguard he was, told him never to shave or cut his hair, and this would, Samson-like, make him invincible. It seems to work – though a Clint-style iron breastplate also helps. He was supposed to be the original utterer of the ‘justification’, "I never killed anyone who didn't need killing". Quite a few needed killing, though, according to him. 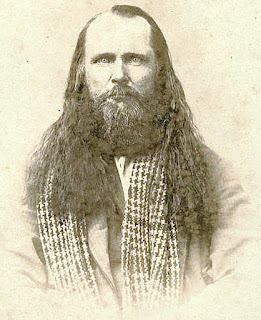 Porter Rockwell as himself 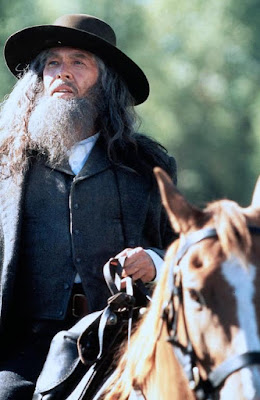 Ann Eliza also appears in the movie, as the main love interest of hero Miles, but as Eliza Rigby, the estranged wife of another Mormon elder (Kevin Tighe), and she is played by Leslie Hope. Also featuring is Miranda (Fay Masterson), a daughter of Brigham Young, with whom Miles dallies before falling for Eliza, the suggestion being that it was a way for him to become a ‘son’ of Young, whom he idolized. Unfortunately, the writing of the screenplay, or teleplay, is anachronistic and the diction of both women very modern, so that neither comes across as at all convincing as a nineteenth-century Mormon.

The picture was written by Dennis Nemec, his only Western, from a novel by Gary Stewart, who apparently “grew up in a traditional Mormon family in St. George, Utah.”

The director was Craig R Baxley, second unit director on The Long Riders.

Berenger was a co-producer.

As for Heston, he doesn’t do a bad job as Young. Charlton was in his seventies by then, about the same age as Young was in the early 1870s. I have been accused of bias as regards Charlton Heston in Westerns. Guilty as charged. I don’t like him. He always seemed to me rather sour, somehow, and several of the oaters he was in weren’t at all good. I make an exception for Will Penny, a fine film in which he was excellent. There are still a couple more of his Westerns I need to review, then I’ll be doing a Chuck-o-rama retrospective of his career. Brace yourselves.

It is entertaining also to see Jeffrey Jones, who for me will always be newspaperman AW Merrick from Deadwood, as a leading Mormon in cahoots with Rigby who (viewers peg this immediately, so no spoiler here) is a ringleader of the anti-Brigham plot.

At the risk of offending reader Barry, I found Berenger to be a bit on the bland side in this, and hardly charismatic as the semi-goody, regretful assassin ‘hero’. I think he suffered by comparison with Coburn. Perhaps Tom was better in other things. 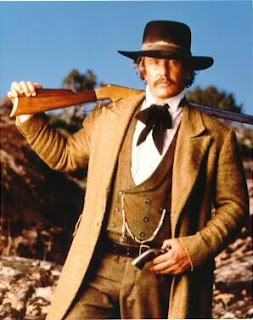 One good thing, the would-be assassin of Young tries to do him in with a derringer, a proper over-and-under Remington one, so that sent the movie up in my estimation. Mind, it was a bit foolish of her to try killing him with that purse gun across a large crowded meeting room. Of course she didn't know that Berenger was a crack shot and would shoot her.

At one point they get to Fort Kanab. Sadly, Fort Kanab, movie set of so many Westerns, had burned down by then, so they had to invent a rather measly stockade in front of a standard Western town and call that Fort Kanab. It was shot in Utah, though.

Miles has some good firearms: a fine Henry repeater, a .44 Smith & Wesson revolver and a lightweight “Police .36 caliber”. The police special turns out to be not so reliable.

The ending was rather good, I thought, properly Western, as there is a final shoot-out at Brigham Young’s home in St George.

You could watch this (it’s on YouTube). You may not be wonderfully instructed in Utah history but you might while away 91 minutes quite painlessly.