The least of 'em maybe, but still good

I reviewed Westbound along with the other late-50s Budd Boetticher/Randolph Scott Westerns back in January 2013 but I watched it again last night and I feel I may have given it too short shrift back then. I still believe it to be one of the slightly weaker Westerns of the series, but “slightly weaker” of such superb pictures is hardly a criticism. They were all so good that had we not seen, say, Ride Lonesome (released the same year as Westbound) we would think Westbound very fine.

Certainly Randy was at his steely best. As the tough Union Captain John Hayes, given in 1864 (though of course as usual all the guns etc. are 1870s) the mission of running the Overland stage line, which had been his civilian career, in order to ensure that gold from California gets through to finance the Union war effort (it ought really to have been called Eastbound) he is gritty, determined and not afraid of violence, yet at the same time decent and noble – Randolph Scott, in fact. 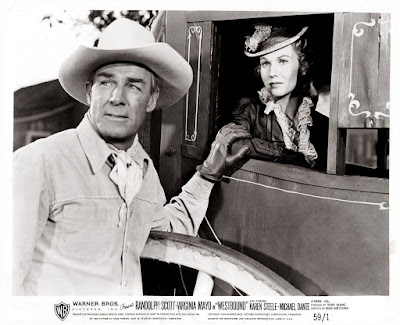 Perhaps it lacked a really charismatic villain. Andrew Duggan, only fifth-billed, plays Clay Putnam, a former friend of Hayes’s and former rival for the hand of glam Virginia Mayo, now husband of said Mayo and a rich man but – oh, no! – a Confederate sympathizer! His principal aim is to stop that gold getting through. Mr. Duggan was encouraged to go into acting by his wartime commander Melvyn Douglas, and he became a very popular character actor in all sorts of genres but as far as Westerns go we think of him maybe as Murdoch in Lancer, or on the big screen as the pious priest in The Bravados, smoothie rancher who wants the whole valley in Domino Kid, or the decent but dull goody (he wasn’t so effective as goody) in Return to Warbow. He had also been, of course, in another of the Boetticher/Scott Westerns, Decision at Sundown, in which he played the rascally sheriff. I think he’s quite good in Westbound (better than I gave him credit for before) as a villain with saving graces. 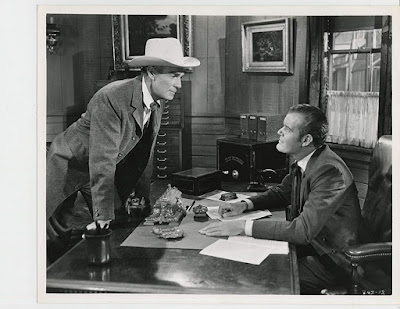 Former friends, on opposite sides in the war - Duggan is the bad guy

Mayo has a fairly limited time on the screen but she is still very good. Did she marry Clay only for his money? Does she still really love Randy? We never quite know. This was the last of her 1950s Westerns (she did a couple of ‘geezer Westerns’ in the 60s) and from the first, Colorado Territory in 1949 with Joel McCrea, through Along the Great Divide with Kirk Douglas, The Iron Mistress with Alan Ladd, Devil’s Canyon with Dale Robertson, The Proud Ones with Robert Ryan, The Big Land, back with Ladd, and The Tall Stranger, once more with McCrea and finally Fort Dobbs with Clint Walker, she was always memorable, strong – and beautiful. 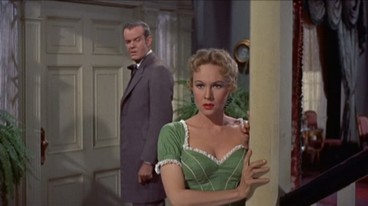 Why did she marry him?
It’s one of those double-female lead Westerns, with the hero having to decide which blonde to go for. Competition for Virginia comes from Karen Steele (billed after Mayo). A favorite of Boetticher’s – the two were much talked of as an item, though she was not one of Budd’s five official wives – she also appeared in Ride Lonesome and Decision at Sundown (all her big-screen Westerns were Boetticher/Scott pictures) but I don’t think she was ever in any danger of winning an Oscar and she was not, um, entirely convincing as a plowgirl and farmer’s wife. Still, she does her best. 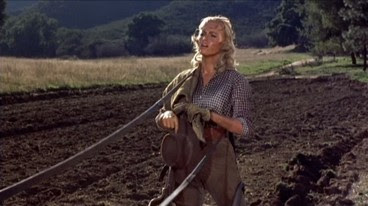 Of the rest of the cast, honors go to Michael Dante. The IMDb bio tells us that there are only two honorary Arizona Rangers: Michael Dante and George W Bush – I know what you’re going to say. Ah, but Michael Dante wasn’t president of the United States. No, actually, I was going to say but George Bush doesn’t have a star on the Palm Springs Walk of Stars. Dante did five feature Westerns (that’s five more than Bush), from Fort Dobbs with Mayo in 1958 to Winterhawk in 1975, via two mid-60s Audie Murphy pictures, Arizona Raiders and Apache Rifles. I don’t think he really stood out in any of them all that much but he is really good in Westbound as Rod Miller, the one-armed Union soldier back from the war, psychologically as well as physically damaged, “just half a man” as he says to his wife Jeanie (Steele). The new stage-line manager (Randy) gives a purpose to the ex-soldier’s life, as well as teaching him how to lever a round into the breech of a Winchester one-handed, John Wayne style, a handy skill, you will agree. 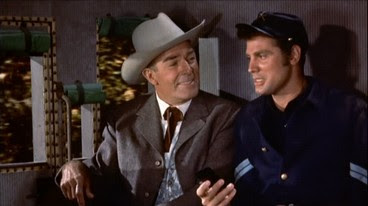 After Dante I would say acting plaudits should go to Michael Pate, not, for once an Indian, but this time a mean gunslinger, wanted in three states and hired by Clay – a part very similar, in fact, to that he had played in another Randolph Scott Western, A Lawless Street, four years before. His part is not exactly subtly written, and he’s a pretty generic mean and ruthless gunfighter, but he does it very well. 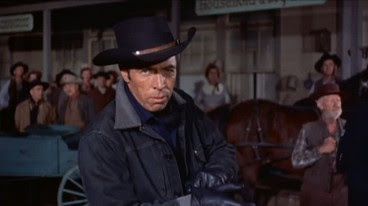 Talking of the writing, here we have another reason why Westbound wasn’t quite up to the standard of the others in the series. I was talking about Burt Kennedy the other day, and his contribution to Seven Men from Now, The Tall T, Ride Lonesome and Comanche Station was highly significant in the quality of those Westerns. They are seriously well written. Westbound, not so much. The screenplay was by Berne Giler from a story by Albert Shelby Le Vino, one of six Westerns Giler did, about the best being Showdown at Abilene, while Le Vino (good name, that) was an older hand who went back to the silent days but in talkie terms co-wrote Tombstone: The Town Too Tough to Die – another movie I must get round to reviewing. Their script is a bit on the predictable side, not terribly original and not as ‘dark’ as the Kennedy ones.

When Mace’s gang attack the stage and kill everyone aboard, including a little girl, Clay can take no more, and he fires Mace. “And to think this happened in the name of the Confederacy!” he bitterly remarks. “Whether the South wins or loses means nothing to me - never has!” is gunman Mace’s cynical reply. In fact, though no one would ever accuse Boetticher of being a Confederate sympathizer, the pro-South characters are generally quite decent folk, despite their bullying of Miller - just misguided, Budd seems to be saying. The pro-Reb doc is actually a good guy.

Visually Westbound is nice, filmed in WarnerColor (very good quality on the DVD) in attractive Warner Ranch locations by J Peverell Marley, a DP who knew what he was doing. Boetticher, even in a short Western (it’s only 72 minutes), takes his time with long shots of riders or the stage in the landscape. Marley shot six Westerns, including The Left-Handed Gun for Arthur Penn, a flawed picture in many ways but visually fine in black & white. Still, it wasn’t Charles Lawton Jr, who shot The Tall T, Ride Lonesome and Comanche Station, for Columbia, and the locations weren’t Lone Pine. Well, you can’t have everything. 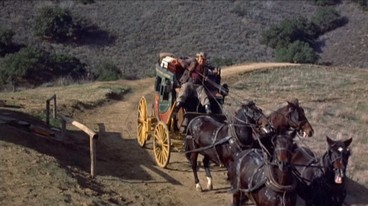 Calif stands in nicely for Colorado

It’s good to see some old stagers, if you’ll forgive the pun, making an appearance, such as Kermit Maynard as the driver, Walter Barnes as the stage depot cook, and Jack Perrin and Buddy Roosevelt as extras.

We are in Julesburg, Colorado, surprisingly Reb in its sympathies – the townsfolk all taunt the one-armed bluebelly and tell him he deserved what he got for fighting the South. Now here comes a reference for the cognoscenti. You have to be a real Westernista to get this one. When Capt. Hayes’s superiors tell him he is to manage the Overland stage line, he asks where, and is told that he will run it out of Julesburg. “It would be Julesburg,” he says ruefully. Now we know, don’t we, because we are dyed-in-the-wool Western buffs, that Jack Slade was the Overland stage manager at Julesburg in the 1860s, and Jack Slade (a very fictional Jack Slade) featured in Randy's oater Western Union in 1941. But maybe I'm picking up references where there aren't any.

There’s a good scene in which a Union-hater stage station manager (Barnes) meanly puts salt in the pie of Cpl. Miller but is then made to eat it himself by Randy, another when his wife slugs the town bully in the jaw, and a rather silly one in which gunman Mace (Pate) shoots Randy’s gunbelt off. Mace has six henchmen, so there his posse piously observes the Mystical Western Number of 7. The scene in which Miller goes out with his Winchester (cocked) to do the evening rounds is very dramatic and well handled. Other good bits: when under attack, Mace shoots out the lights – something I’ve always wanted to do (Shoot Out the Lights by Richard Thompson being a favorite song of mine) and the final showdown, in town at night, is also pretty well done. In the last few scenes we get to learn which blonde Randy will go for (both husbands being now deceased). 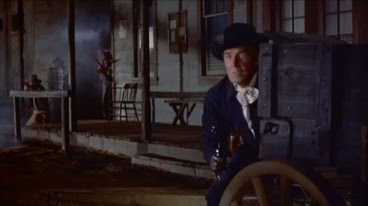 There’s a score by David Buttolph, appropriately chirpy, almost Stagecoach-like, while the stage is bowling along.

All in all, it’s a highly enjoyable Western, which only suffers by comparison. It’s not mediocre, as some have suggested and indeed I myself may have been guilty of implying the first time round. It was shot in 20 days for only $565,000 (still more than the Columbia ones got) but it’s no weak second feature – far from it. Jean-Luc Godard, in homage to Budd Boetticher, has his characters in Breathless go into a movie theater to see this film – though would I be naughty if I said that was hardly a qualification for cinematic greatness? Boetticher said Westbound was "crap". It wasn’t. 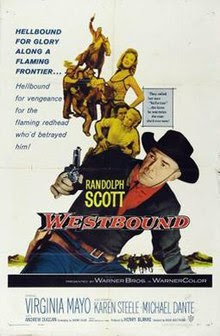 I don't know why they call Virginia a redhead