Reasons to be cheerful

If you like a George Montgomery Western now and then (and, dear Westernista, which of us does not?) then you won’t do much better than one of the three of his that were released in 1954, The Lone Gun. 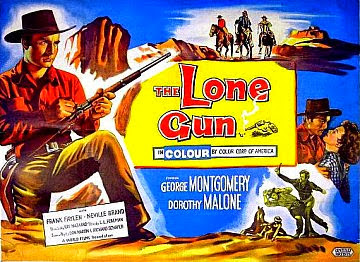 1. George is at his tall, tough and taciturn best, and probably some other adjectives beginning with T as well. He is Cruze, a drifter who fetches up in a border town and because of his gruff grit is hired on as marshal. He proceeds to bring law ‘n’ order to the frontier by punching out and shooting the bad guys. 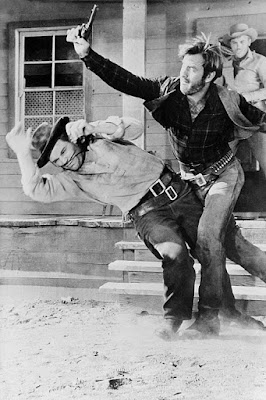 2. And boy, are they bad. There are three rustler brothers and quite honestly, we couldn’t ask for better casting choices for this trio of thugs, for the Moran boys are Neville Brand, Douglas Kennedy and Robert J Wilke. How’s that for bad guys? 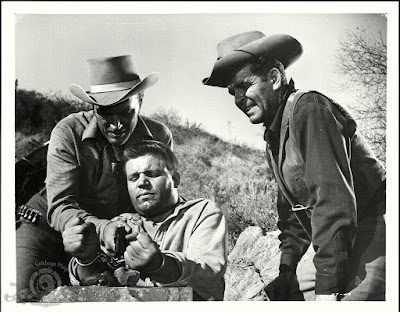 The 3 villains, Wilke, Brand and Kennedy

3. Then there’s a slight Wyatt Earp/Doc Holliday vibe because the steely lawman befriends a louche gambler, and this frock-coated smoothie, devilishly slick with the cards, Fairweather, is played by Frank Faylen, a first-class Western actor, Cotton Wilson in Gunfight at the OK Corral, Sgt. Kruger in 7th Cavalry, Jeff in The Nevadan, etc. They meet out on the prairie in the first reel and as they both have the same destination ("no place in particular") they decide to go there together. 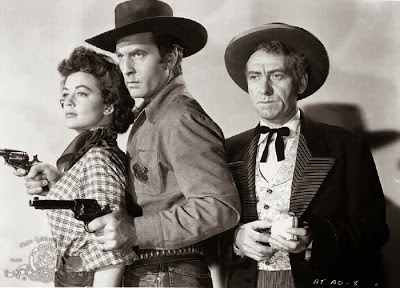 Frank is the slick gambler

4. Not only that, reason No. 4, he makes much use of a derringer! And, dear e-readers, said derringer plays a key part in the plot. Well, you know me, that is bound to raise this Western in my (already considerable) estimation. 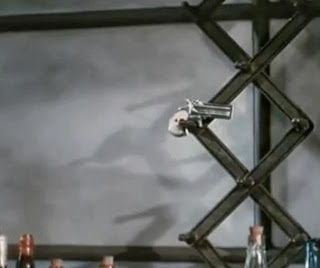 5. As if the list of actors wasn’t already good enough, Douglas Fowley is the bar tender Charlie who is in cahoots with (no other word will do, cahoots) the Moran brothers, and excellently snide and sneering he is too, while eternal punk kid Skip Homeier (actually by the mid-50s he wasn’t playing punk kids any more, just punks) is the rancher who has weakly allowed the Morans to take over his spread. 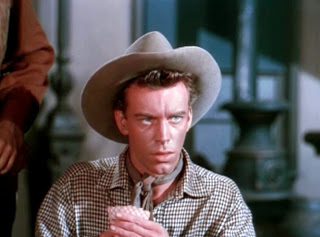 Skip is a punk (again)

6. And if you look carefully you can spot the likes of Bill Coontz, Boyd ‘Red’ Morgan, Chuck Roberson, et al. See? I told you it was a great cast.

7. The female lead is Dorothy Malone. Now, not only was Ms. Malone extremely beautiful, she was very talented – Oscar winning, in fact – and she graced many a Western, invariably improving it. We think especially of her roles in Colorado Territory, Law and Order, Tall Man Riding, Warlock and The Last Sunset. For me, she was best of all as the amour of Jack Slade in 1953. 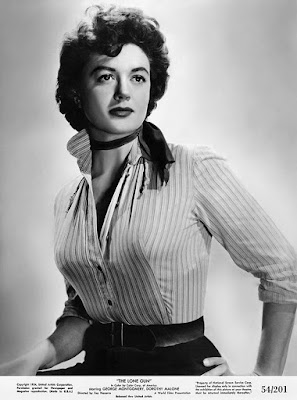 8. Then again, the picture was directed by our old pal Ray Nazarro. Ray went right back to the silent days, started as assistant director on talkie Westerns in the 1930s and was still going in the late 50s. He used to turn out a picture a month for Columbia, on time and on budget, if required (and studio boss Harry Cohn required). Good old Ray. He certainly knew what he was doing, and the picture rattles along at a cracking pace. 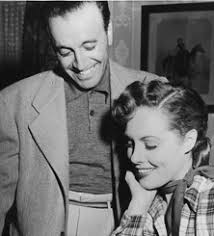 9. Next point: what a title! I have discoursed elsewhere (here, in fact) on the whole notion of ‘lone’ in the Western, the solitary cowboy, alone, lone, lonely, and/or lonesome. It is a key element of the genre. There are so many Western titles as evidence of this. The Lone Hand, A Man Alone, Buchanan Rides Alone, Ride Lonesome, Lonely Are the Brave, The Lonely Man, and so on ad pretty well infinitum. The Lone Gun, though, is almost the best of them.

10. There are nice Iverson Ranch locations shot in color by Lester White (Top Gun, The Stranger Wore a Gun, Gun Fury, Drango, and many more). 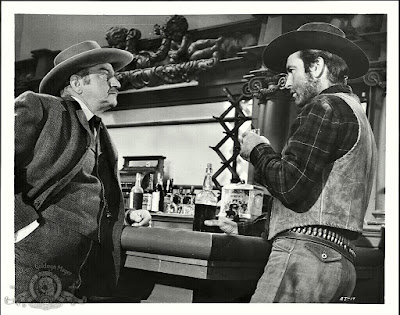 12. The producer was the great Edward Small, though tragically this time the picture doesn’t open with that mega-giant SMALL logo towering hugely in the sky. 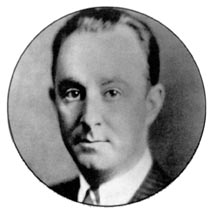 Come on, guys and gals. That’s a lot of reasons to be cheerful as far as this oater is concerned. Terrific stuff, and highly recommended.