Popular actor Ethan Hawke (Training Day, The Purge, etc.) seems to have got a taste for the Western. It is said that while he was making The Purge and staying with its producer Jason Blum, he and Blum watched a lot of Westerns and Hawke persuaded Blum to make one, A Valley of Violence, which we reviewed the other day. The same year Hawke was Goodnight Robicheaux in the remake of The Magnificent Seven. These were his first Westerns but since then he has made The Kid.

Every generation must have its Billy the Kid picture. The myth exercises an undying fascination for the movie industry, and celluloid Billies have been appearing since the silent days. Doubtless there will be more in the future. This one adds a new twist in that the title has a double meaning. They invented a young boy (even younger than Billy) who witnesses and gets caught up in Bonney’s last days. So the titular kid might be either character.

This time “Billy Bonney” (that’s how he introduces himself) is played by Dane DeHaan, who was with Hawke in Valerian and the City of a Thousand Planets and recently wrapped production on Amazon Studio's international cocaine drama Zero Zero Zero, in which he stars. They’ve got the look of him very well, especially with his hat, which refers to that famous photograph. DeHaan was actually 33 at the time, whereas the real Billy was only 21 when he was killed, but that’s par for the course. Most screen Billies have been older than the real one. Kris Kristofferson was 36 when he was Billy for Sam Peckinpah, Buster Crabbe and Bob Steele were 34 when they starred in their versions, Paul Newman and Michael J Pollard were 33 when they were in theirs, Robert Taylor, Val Kilmer and Scott Brady 30, Emilio Estevez 28 and Johnny Mack Brown 26. Franklyn Farnum in 1925 was a geriatric 47! The youngest was Jack Buetel at 25, but that was in the worst Billy film of all.

Hawke plays Pat Garrett. It’s always a good role, that. Garrett (31 when he shot Billy the Kid, as against Hawke’s 49) was a charismatic figure. At 5' 10½" (1.79 m) Hawke couldn’t quite match Garrett for height (Pat was vertiginously tall) but he does a good job with the lawman’s authority and command. 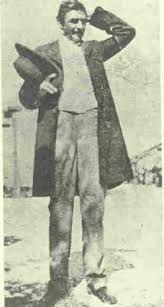 The movie trots out the old story that Pat and Billy were close friends before one shot the other, though there is little or no evidence for that. Sometimes because of movies the fiction becomes accepted fact. For me, the best screen Garretts were James Coburn and John Dehner. The worst, Thomas Mitchell. 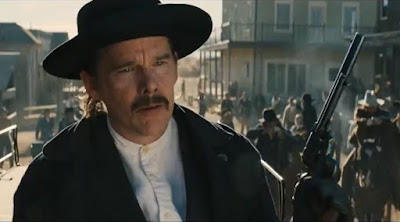 It opens with an extremely abusive drunken man beating his wife, eventually to death, and their two children - a boy, Rio, aged 14 (Jake Schur) and his elder sister, Sara (Leila George) - kill the father in consequence. Unfortunately, the man’s brother, the children’s uncle (Chris Pratt, who was also in the new The Magnificent Seven) arrives and is just as bad, an abusive out-of-control bully. Sara and Rio manage to escape him. The girl steals a horse from a local farm and they head for Santa Fe, riding double. 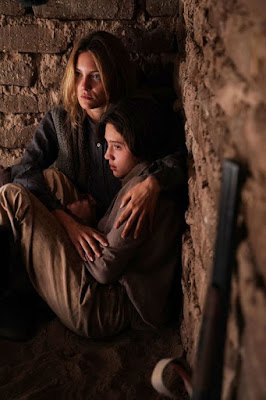 Straight away they come across Billy the Kid – Rio recognizes him from dime novels. Billy’s in a cabin with some pals, and Sheriff Pat Garrett is outside with some men, come to arrest Billy. This is the December 1880 siege at the rock house at Stinking Springs, always shown in Westerns as a wooden cabin. I think it is so that the makers can quote previous Westerns by having sunlight shine through bullet holes. Charlie Bowdre (Chris Bylsma) goes outside and is duly shot (though there are no “I wish… I wish…” dying words). Pat gallops up and shoots a horse, making it fall in the doorway - I think he actually did this with some fine marksmanship with a rifle from a distance but this way looks more dramatic. The boys inside, who include Dirty Dave Rudabaugh (Chad Dashnaw), don’t have any “Plan B” (some of the dialogue is a bit anachronistic) and so they surrender. The children emerge too. 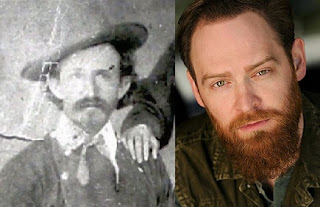 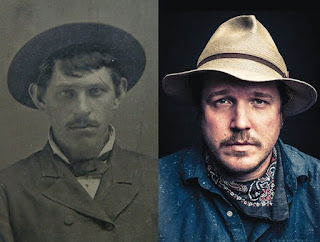 Rio and Garrett bond, sort of, though Sara warns the boy, “It seems like he cares but he don’t.” At Sara’s urging, Rio keeps mum about their patricide, even though Pat senses something of the kind and at moments the boy seems on the verge of blurting it out. But he doesn’t.

Billy shows himself charming and insouciant to the interested spectators as he is brought in to Santa Fe. The local law wants Billy, seemingly to lynch him, but Sheriff Garrett will have none of it. He's going to Lincoln. It didn't actually happen quite like that but never mind. 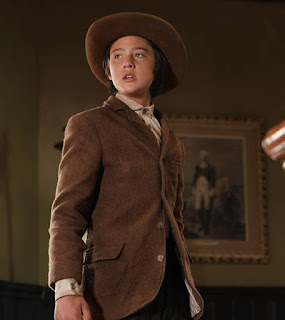 The children venture into a dance hall but unfortunately their wicked uncle catches up with them. The boy is kicked out while the girl is to be sold into prostitution. Rio acquires (not terribly honestly) a horse and a gun and goes to Lincoln, where Billy is now imprisoned in the court house.

Now we see Billy’s escape, which more or less follows the facts. There’s no gun hidden in the outhouse; Billy grabs the pistol of Deputy Bell (Joseph Santos) and shoots him with it. He then shoots Bob Ollinger or Olinger (Adam Baldwin, a distant relation of the Baldwins, doing his best, but of course no one could equal RG Armstrong’s portrayal) with his own shotgun. It’s all quite well done. A plot addition is that young Rio has tried to hold up the local bank as a distraction and is thus held in the court house with Billy (he was shot but the bullet passed right through), and now Billy hoicks him up onto a horse and they flee Lincoln together. 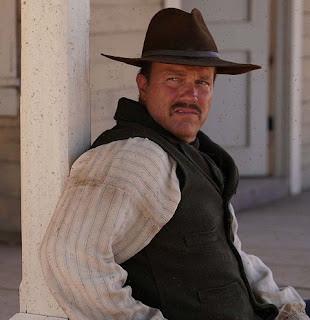 Billy teaches Rio to shoot, in a time-honored scene.

Now we move to Fort Sumner. Garrett goes in and speaks to Pete Maxwell (strangely uncredited actor) and we get Quien es? from Billy. Three times, in fact, in a kind of biblical way. He’s outside in the yard, though, and is wearing a gun. He sees Pat but doesn’t try to draw or anything. Pat shoots him. Paulita Maxwell (Samantha Zajarias) and other women mourn him with much boo-hooing. Billy gave Rio a stone as a lucky charm earlier, and now the boy puts it back in the dead outlaw’s hands. 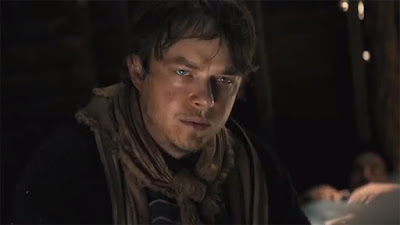 Billy destined to die, and he knows it

That’s not the end, though. There’s a coda, as Rio seeks out Garrett, tells him the truth this time, and asks for the sheriff’s help in locating and saving his sis. Good-guy Garrett agrees, of course, so there’s rather a snazzy shoot-out in a saloon and then a Main Street showdown gunfight to finish the picture with.

I thought it was all rather good. It ends with a plaintive slightly Dylanesque song by Ben Dickey over the (very long) credits.

It was directed by Vincent D’Onofrio, who also plays Santa Fe Sheriff Romero. Mr. D’Onofrio is a lauded actor and he too was in the new The Magnificent Seven, as Jack Horne. D’Onofrio is to star as Judge Holden in the forthcoming film version of Blood Meridian, if that sees the light of day (Ridley Scott has been attempting to make Cormac McCarthy's Blood Meridian for years but hasn’t managed it yet).

The Kid was written by Andrew Lanham, his only Western. It was shot in very handsome New Mexico locations by Matthew J Lloyd. It’s a good-looking picture.