You can argue if you want whether Hud is a Western. It is perhaps more a modern drama. IMDb classifies it as Drama, Western and Brian Garfield reviews it in his Western Films. Characters wear Stetsons (or straw curled-brim hats anyway) and use Winchesters, and a Texas cattle ranch is the setting. More importantly, there are some Western themes (Larry McMurtry wrote the source novel) and in the ‘decent-rancher vs. ne’er-do-well son’ relationship I am reminded of Vengeance Valley. On the other hand, it’s full of automobiles and transistor radios, and has more in common with the angry-young-man pictures of the 50s and 60s. Whatever it is, Western or not, it’s a fine film. 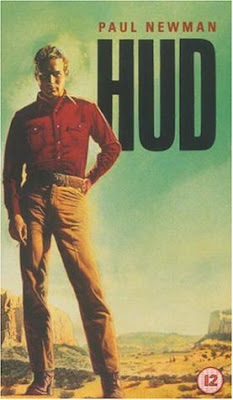 Martin Ritt (below) was certainly a talented director, called in the IMDb bio “one of the best and most sensitive American filmmakers of all time”. That may be a bit over the top but he sure made some fine pictures, was Oscar-nominated (for Hud, in fact) and was a BAFTA winner (for The Spy Who Came in from the Cold). You wouldn’t say he was a Westernista, not really, though he made, apart from Hud, two other pictures that could be defined as Westerns, Hombre (1967), which certainly was a Western, and a very good one too, based on the Elmore Leonard novel, and The Outrage (1964), more of a stage-play really, Rashomon in the West, and rather overwrought. Interestingly, all three starred Paul Newman. 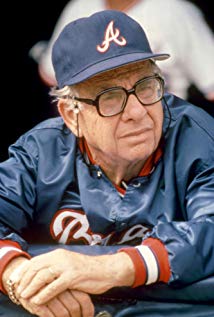 Newman had a mixed career, in my view, in Westerns. He made eight (depending on your definition), and played some of the most famous characters of Western myth – Billy the Kid, Butch Cassidy, Judge Roy Bean and Buffalo Bill. That’s quite a dramatis personae. But when he started, as Billy in The Left-Handed Gun for Arthur Penn in 1958, he was still in full method-acting mode and his performance verged dangerously on overacting (in his mid-thirties at the time, he was also a tad geriatric to play Bonney), and his title role in The Life and Times of Judge Roy Bean (for John Huston) and William Cody (for Robert Altman) in Buffalo Bill and the Indians were also perilously close to parody. I personally am not fond of Butch Cassidy and the Sundance Kid, more of a commercial semi-comic buddy movie than true Western, but it was certainly a huge hit. On the other side of the coin, he was superb as the white boy brought up by the Apache in Hombre. And he is magnificent in the title role of Hud. 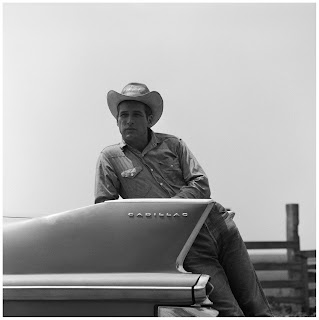 The Caddy is a key character too

But he wasn’t considered the best actor on the set. Newman was nominated for an Oscar but didn’t win that year. Two of his co-stars did, though: Melvyn Douglas and Patricia Neal. Mr. Douglas, who twice won an Academy Award (the other for Being There) plays Hud’s father, Homer, an elderly, decent cattleman who has given up on his reprobate son. Western fans may also remember Douglas from The Sea of Grass and Advance to the Rear. His performance as tired, worn-out and saddened rancher, a wonderful blend of bitterness and nobility, facing despair when foot-and-mouth disease is found in his herd, is truly fine. So too is that of Ms. Neal, playing the put-upon and taken-for-granted housekeeper Alma, her beauty fading, trying to fend off the odious advances of a drunken Hud. Both these are really sad figures.

Actually, everyone is in this story. It’s a pretty nihilistic tale, highly pessimistic in its outlook, and all the characters are basically going nowhere. 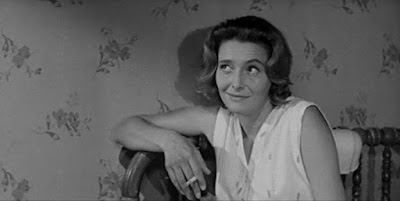 Maybe the exception to that is Hud’s nephew, Homer’s grandson, Lonnie, played by fourth-billed Brandon De Wilde. Now we all know Brandon from his part in Shane a decade before this. His Joey in that picture won huge praise. Myself, I didn’t think he was that good, being too young (he was eleven but seemed much younger) and too whiny to be the tough lad in Jack Schaefer’s novel. Not that I criticize child actors; it’s miraculous that they are as good as they are. But Shane certainly made Brandon’s name. He continued with Westerns as a teenager, playing the kid with James Stewart in Night Passage and then with Lee Marvin in The Missouri Traveler (neither especially good films). I have never seen him better than he was in Hud, though. He was actually twenty then but he managed perfectly the in-between youth, neither boy nor yet man, who is so influenced by - and torn between - his grandfather, his uncle and Alma. It’s another excellent performance, in a film studded with them. 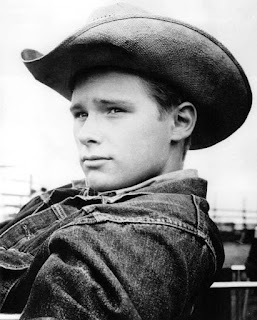 No longer the whiny kid of Shane

Oscar or not, Newman was superb in this. Tony Mastroianni in The Cleveland Press at the time wrote, “As Hud, Newman is perfect. He's ornery. He's nasty. He wears a deceptive smile and the occasional decent sentiments that come from his lips sound as hollow as they were meant to be.” The Academy Award actually went to Sidney Poitier for Lilies of the Field. I would have given it to Newman.

For me, though, the best aspect of this picture is the sheer visual beauty. James Wong Howe shot all three of Ritt’s Westerns (or semi-Westerns), as well as The Molly Maguires. He was one of the most talented of the cinematographers in our noble genre but he was a real maestro in black & white. The choice of monochrome for this picture (a big Paramount release in the mid-60s, it would certainly have commanded color) was inspired. It gives a purity and starkness to the picture, enhanced by the wide-screen Panavision. Almost every frame seems like a work of art, like a print from one the great photographic masters – which he was. The movie is worth watching simply for this. And Jimmy got an Oscar for it. 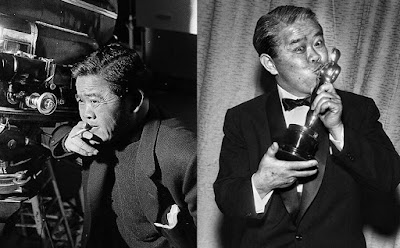 He seems pleased with his Oscar

The great Robert Surtees shot another McMurtry adaptation, The Last Picture Show, in 1971, also in black & white, and very fine it was too (he was Oscar-nominated for it) but Howe’s is bleaker, lonelier, sadder, dustier, more spare.

As for the writing, well, of course there was a master novelist at work here. McMurtry is one of the truly great American writers, and Horseman, Pass By (1961) is magnificent. But full marks also to the husband-and-wife team of Irving Ravetch and Harriet Frank Jr (both Oscar-nominated) for their adaptation. Ravetch worked for Ritt on Norma Rae, and the couple did The Cowboys for John Wayne. 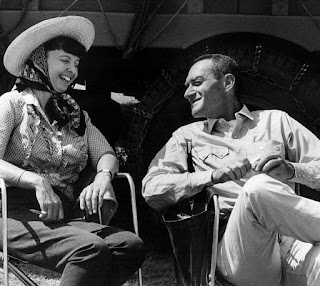 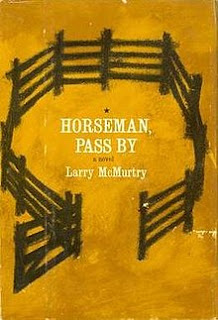 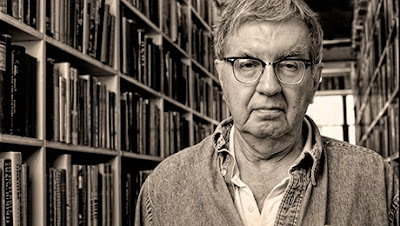 The music is by Elmer Bernstein, so you couldn’t want much better than that, and there is a lot of tinkling guitar and folksy charm, which contrasts admirably with the gloom of the theme.

Hud really is a pretty loathsome character. When Homer says, “You’re an unprincipled man, Hud,” he’s not telling the half of it. Hud womanizes cynically but he has no relationships. Women are just sex objects for him. When foot-and-mouth strikes he derides it as “a schoolbook disease” and is all for selling the cattle quick, now, before anyone finds out.

There’s a saloon brawl and a rodeo, and many other ‘Western’ trimmings. The scene with the cattle in the slaughter pit is truly harrowing, as it was meant to be, almost difficult to watch. Homer himself shoots the last two wild longhorns that he has. This is a true ‘end-of-the-West’ symbol – of course McMurtry was something of a specialist in that.

Although the movie is called Hud, and stars Newman, in many ways it is the boy Lonnie who is the central character. Their world revolves around him, and it his relationships with the other principals that are key. At one point Hud says, “Nobody gets out of life alive” but perhaps Lonnie does, at the end. Unlike that of Alma, his departure is the sole ray of hope in an otherwise totally bleak tale. Maybe there’s a suggestion that the new generation will hark back to the values of their old West grandfathers, rather than take after their going-nowhere parents. Hud is left alone, to drink the ranch away, probably, or end up shot to death by some jealous husband, or die in a DUI smash in his flashy Cadillac. It will be good riddance.

Hud ranks with Lonely Are the Brave, The Misfits and The Lusty Men as essentially pessimistic contemporary anti-Westerns, and is the equal of those fine films. Even Ride the High Country the year before wasn’t quite as bleak and lugubrious as Hud.