The outing of Wild Bill Elliott as Red Ryder Conquest of Cheyenne followed hard on the hooves of Sun Valley Cyclone which we reviewed the other day (Cyclone was released in May 1946 and Conquest in July). You might think from the title that this one would be about some cowboys taking over a Wyoming town or perhaps about the US Cavalry defeating a Native American people but you’d be wrong on both counts. Cheyenne is a dame (Peggy Stewart, a regular of Republic oaters with all their screen cowboy leads) and she will be conquered, not by Red (for he was far too chaste, noble and busy righting wrongs to romance the ladies) but by the handsome young ingénu Tom Dean (Jay Kirby, often Hopalong Cassidy’s young sidekick Johnny). 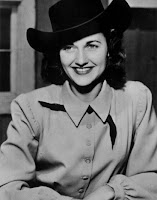 ...and Jay will conquer her
(he looks a bit like Audie)

Red and Beaver appear out of the Red Ryder book as usual and Red starts blazing away before they both nip behind the big back cover. This one is set in West Texas, and we get the front pages of Amarillo and Lubbock newspapers which tell us that a series of stage hold-ups has occurred and people have been kidnapped. Now beautiful rancher Cheyenne Jackson is missing! The weak sheriff (Tom London) does nothing about it, much to the annoyance of the Duchess (Alice Fleming again), and it isn’t until Red and Beaver (Bobby Blake, as per usual) get to that well-known Texas town of Muleshoe (which lies kinda between Amarillo and Lubbock) that action will be taken to find the culprits and restore law ‘n’ order to this troubled state. 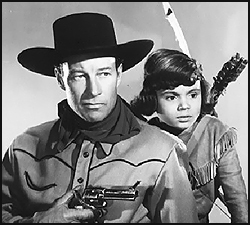 They'll save the day

This is another Western, like the previous one, set quite late in time. The main feature of this one is a horseless carriage that Cheyenne has bought (she wasn’t kidnapped; she had gone to Dallas to purchase it). Oil has been discovered in East Texas but not yet in the western part of the state. People in Muleshoe scoff at oil. What good is it? Everyone’s getting electric light these days; they don’t need oil for their lamps. But far-seeing young oilman Tom (who has been unjustly accused of the kidnappings, just because he’s a stranger in these here parts) declares that oil is the future – and automobiles too. And he reckons that the Muleshoe area is chock full of the stuff. 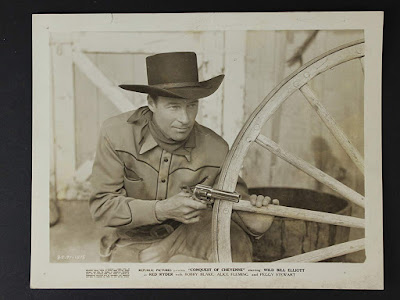 Now we meet the (inevitable) scoundrels that (inevitably) infest the town. Chief among them is the banker, Tuttle (and when did you last see a Western with an honest banker?) played by our old pal Milton Kibbee. He has henchmen, obviously, Long (Frank McCarroll) and Murdo (George Sherwood), as well as a tame geologist, McBride (Kenne Duncan). They’ve already murdered Cheyenne’s dad, who found oil on his land, and they are ready to do the same to the pesky Tom – for they want all that oil for their greedy selves. 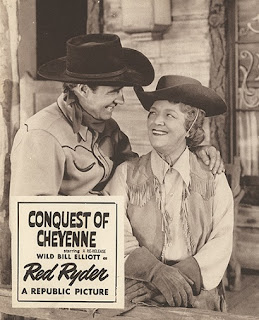 Alice is the Duchess again

We also get, in this one, something that was sorely lacking in the previous outing, a comic old-timer. Daffy is played by serial oldie Emmett Lynn, who must have lost count of all the times he was obliged to cackle and fail to shoot straight. 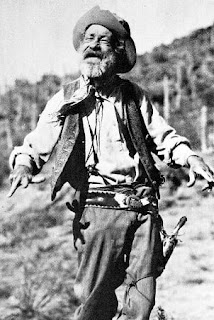 Well, there will be, as you will imagine, much gallopin’ hither and yon and not a little shootin’ too, before Red solves the mystery, unmasks the villains and brings peace and prosperity back to West Texas. The automobile will be pressed into service turning a windlass which drives the drilling on the oil-well that Tom has built and, best of all, a derringer will plays a key part in the plot. Hooray! 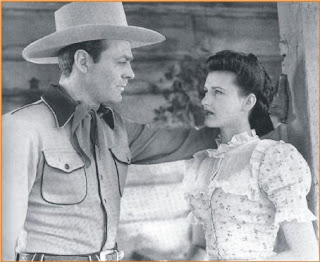 Naturally it will all end with a gusher and wedding bells for Tom and Cheyenne, who will certainly live happily ever after. 56 minutes of rootin’ tootin’ fun. 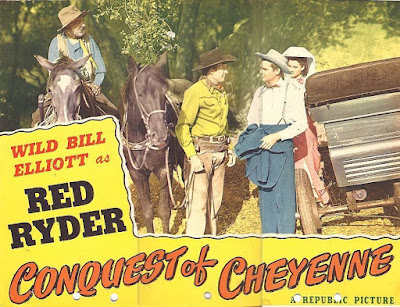 Rootin' tootin', with a horseless carriage