Belle Starr is one of the most popular subjects for the Western movie. For most of their history, Western movies were made by men, and were mostly about men. Budd Boetticher famously said, “The women were incidental in those films.” They were someone for the male heroes and villains to react to, or fight over, or save. Occasionally an actress got top billing, as with Marlene Dietrich in Destry Rides Again or Jean Arthur in Arizona, but that didn’t mean that the movie was principally about her character. Destry was about how James Stewart tamed the town and Arizona was really about William Holden winning Phoebe’s hand, and the West. Women were adjuncts.

Just occasionally, though, Hollywood liked to feature a dame with a gun on her hip – the Calamity Jane syndrome. Calamity had been a favorite character with the dime novelists, long before the first silent-movie Westerns. If the gal was sassy and wore pants, so much the better. There was something almost titillating about it. The epitome of this was the sexy Jane Russell as Calamity in The Paleface, and perhaps even more so, her role as Mike ‘The Torch’ Delroy in the sequel Son of Paleface, bandit chieftainess extraordinaire.

So who better to shine the light on if that was your thing than Belle Starr?

After all, Belle was probably the most famous bandida of the whole Wild West. She was “Queen of the Oklahoma Outlaws”. She associated with the James boys and the Youngers – legend has it that Cole Younger was the father of her daughter Pearl. She went to prison for horse rustling and died shot in the back in a murder that has never been solved. Ideal material for the Hollywood Western! 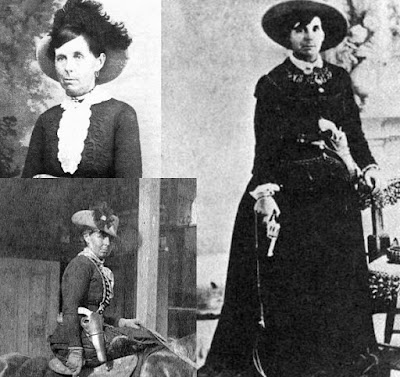 Various pictures said to be of Belle Starr

In movies she goes back at least to a silent of 1928, Court Martial, in which she was played by the famous Betty Compson. Later talkie Belles were Gene Tierney, Jane Russell, Marie Windsor, Elsa Martinelli and Pamela Reed, to name but a (very) few. Often she was introduced as love interest into pictures about the Jameses and/or Youngers but sometimes she herself was the central character. In 1941, though second-billed to Randolph Scott as her husband, she dominated the action of Fox’s Belle Starr. And in 1980 she became the subject of a TV movie screened by CBS, with the same title, Belle Starr.

Of course movies couldn’t resist casting a beautiful lady as Belle, as the above photo montage will testify, even if the real Belle was not exactly, ahem, how can I put this tactfully, well, not quite in the Scarlett Johansson/Kate Winslet class. This time it was the turn of Elizabeth Montgomery to be Belle. Known to all in the 60s as the star of Bewitched (an incredible 254 episodes!) she had a distinguished film career before that, for example as the leading lady in the Otto Preminger-directed The Court-Martial of Billy Mitchell, with Gary Cooper – though it was chiefly on TV that she made her name. Unsurprisingly, she featured largely in NBC’s Robert Montgomery Presents. I say unsurprisingly because Robert was her dad. Her father didn’t do Westerns at all but she had a minor crack at them; she was in episodes of five different Western TV shows at one time or another and she did three Western TV movies, being in love with an outlaw in each one (Jesse James in Bitter Heritage, the Sundance Kid in Mrs. Sundance and Cole Younger in Belle Starr). 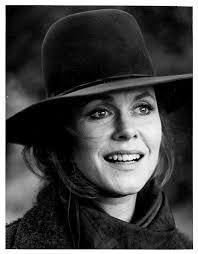 The TV movie had quite good credentials in that it was photographed and directed by John Alonzo, who had been Miguel in The Magnificent Seven, and director of photography on Tom Horn. This was, as far as I know, his only Western as director but he did a fair job. Belle Starr was written by James Lee Barrett, who wrote or co-wrote The  Undefeated, Bandolero!, Shenandoah, Something Big and The Cheyenne Social Club, not all the best Westerns in the world but he knew his way around the Western script. 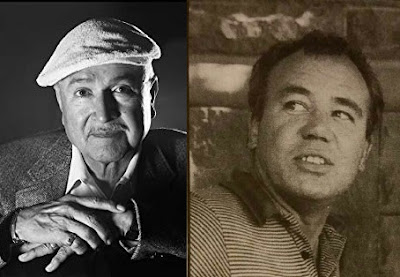 It opens with Belle giving her son Ed (David Knell) a shooting lesson, going for the old chestnut “Squeeze, don’t pull” (it’s about the only thing a shooting tutor can think of to say, and one does rather get tired of it). This Ed is the son of her first husband Jim Reed, and in fact in all likelihood so was her other child, Pearl, though in this movie Belle, Cole (Cliff Potts, who the year before had been Bob Dalton in The Last Ride of the Dalton Gang, another TV movie) and indeed Pearl herself all accept that Younger is the daddy. Cole Younger himself, in his 1903 autobiography, fervently denied that he had had any relations with Belle whatsoever, and Pearl was most definitely not his daughter, and that may have been true, though the memoir is so obviously fraudulent in many places that you can’t believe it just because he says it in the book. 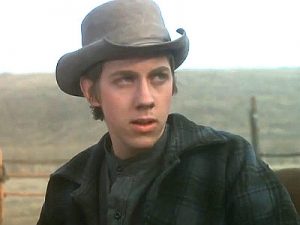 Ed is her son 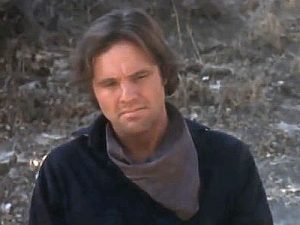 And Cole is her lover

Ed in the movie is not a happy bunny. “Why can’t you be like other women?” he asks his mother. “I ain’t never met another woman I wanted to be like,” momma replies.

Pearl Starr was born in 1868 and in this picture is a young girl of about twelve (Michelle Stacy), so we must assume the story is set c. 1880. Which is odd because Cole had been in the Minnesota pen for four years by then, Jesse James was living under the name Howard in St Louis and as for the Daltons, Bob was about the same age as Pearl, so a child, and Grat (the movie oddly calls him Gratt) was a teenager in Kansas who idolized his lawman brother Frank.  Yet in the film Jesse and Frank James (Michael Cavanaugh and Gary Combs) and the Dalton boys (Jesse and Alan Vint) are all cheerfully robbing with Belle in Texas. And in reality Ed Reed was the second child, thus younger than Pearl. Oh well, we can’t expect chronology. Or fact. 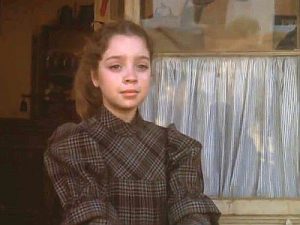 They live in Clearview, Texas, where the local churchwomen are scandalized by Pearl’s presence and send their pastor (Geoffrey Lewis, always rather good) as spokesman to express their disapprobation. Belle is married to Sam Starr, called Blue Duck (Geno Silva), but it is a very open marriage, allowing Belle to consort with whichever man she wishes, of which Sam does not approve at all. 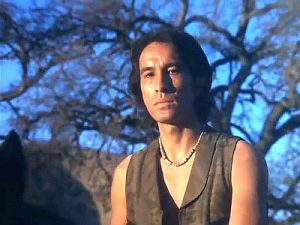 Now Blue Duck, whose Cherokee name was Sha-con-gah, was an outlaw who posed with Belle in a photograph on May 24, 1886. When Belle married Sam Starr, she and her husband formed their own gang, which Blue Duck joined. He is believed to have ridden with that gang through the end of the 1870s and early 1880s, although his involvement with them was off and on.The month after the photo was taken, Blue Duck was arrested for murder and sentenced by Judge Isaac Parker at Fort Smith to life imprisonment. But this movie decided to conflate Messrs. Starr and Duck into one person. 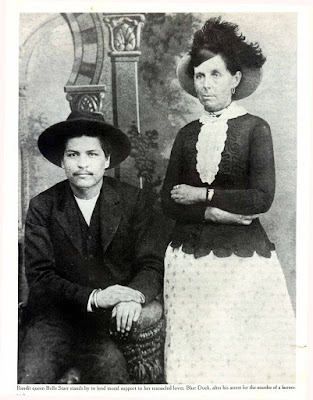 The writer and director also decided to borrow bits of the Jesse James story for Belle. There’s a fire-bomb attack on Belle’s rancho very like the January 1875 one on the James place, and the raid Belle organizes with the James and Dalton boys goes awry in a very Northfield-like way. Frank and Jesse leave, as they did after the Northfield fiasco.

The movie ends with Belle’s murder. We are led to believe (though we never see the culprit) that it was her son Ed, who blabbed to the authorities about the raid on the stockyards in Tulsa which went so badly, or possibly Sam Starr/Blue Duck. She is shot in the back with a shotgun, which is what happened in reality, in February 1889. 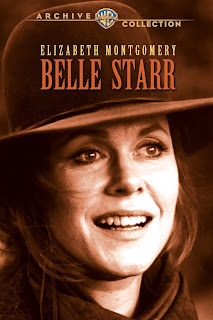 It’s not bad, I guess. I mean it’s a TV movie, with the sequential mini-climaxes in the action followed by fades-to-black which that that entails, but it’s reasonably well done in its way.