Cole is the boss

We were on the trail of director RG Springsteen, and following him quite closely too, until we got to his 1958 picture Cole Younger, Gunfighter, when we kind of got onto a side-trail, a Younger one, and we stopped to look at the 1949 Warners offering The Younger Brothers. Maybe we’ll get back to Bud Springsteen eventually but today it’s another Western featuring Cole, a TV movie of 1970, The Intruders. 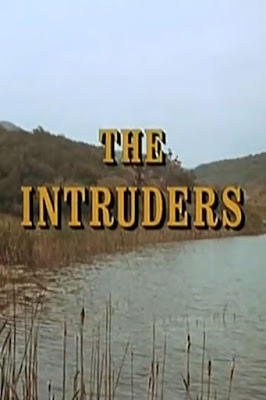 It was directed by William A Graham, who did helm three big-screen Westerns, including Waterhole Three in 1967, but did mostly TV work. He made Gore Vidal’s Billy the Kid for TV and also the country-singer Western The Last Days of Frank and Jesse James. This one, The Intruders, is very obviously a TV show, with frequent mini-climaxes before fades-to-black for the commercial side of things, but that aside it ‘reads’ like a pretty standard oater. 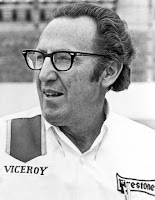 It stars Don Murray. Now Don Murray came just a tad late to the Western. He starred in From Hell to Texas in 1958 and These Thousand Hills in 1959 but the rest of his oaters were in the 60s and 70s, not the most glorious epoch of the genre. For example, he led in the disappointing 1966 remake of The Plainsman (which I want to review soon) and he co-starred in Alan Ladd’s last Western, One Foot in Hell, and pretty bad it was too. It’s a pity because I thought he was really good in From Hell to Texas. Under Henry Hathaway’s direction Don underplayed the part and succeeded in projecting in a convincing way as a young, rather naive but still courageous loner. It’s a fine picture, actually. 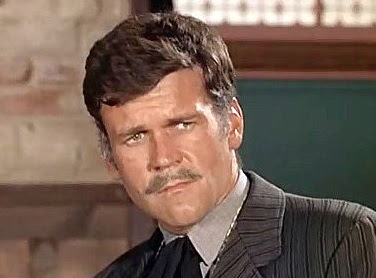 Don is the washed-up lawman

In The Intruders, then still only in his late thirties (it was shot in 1967 though not screened till three years later) he plays an older man, graying, a certain Marshal Sam Garrison, a lawman with a great reputation as gunman, one who cleaned up various tough towns and is now (1876) in charge in Madelia, Minnesota. Ned Buntline wrote a dime novel about him. Madelia is about eighty miles south-west of Northfield, and The Intruders is a post-Northfield bank raid story featuring the James-Younger gang.

Rather disappointingly, however, there is no attempt by the writer (Dean Riesner from a William Lansford story) or director to delineate the character of any of the gang except Cole. Jesse James appears, played by Stuart Margolin (Angel in The Rockford Files) but in the twinkling of an eye he's gone. 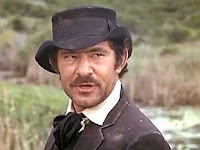 We are told that the gang marauded though Minnesota, pillaging, burning and looting (they didn’t, of course), and the picture's gang members are just nameless riders. Cole, though, is played by the great Gene Evans. He had debuted in a Monte Hale Western directed by RG Springsteen in 1947 (see, I told you we’d get back to RG) and would become memorable to us fans of the Western genre in the likes of Cattle Queen of Montana, The War Wagon, Support Your Local Sheriff! and Sam Peckinpah pictures such as The Ballad of Cable Hogue and Pat Garrett & Billy the Kid. His Cole is the red-bearded boss of the outfit. 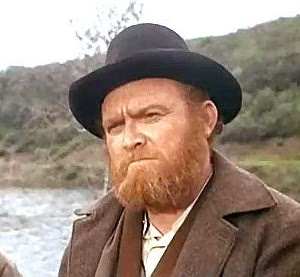 Anne Francis (from Bad Day at Black Rock) is the marshal’s wife and she knows his secret: he has lost his nerve. The townsfolk don’t know this (yet) but they’ll discover the truth when a lightning-fast gunslinger comes to town, a certain Pardo, played, rather well in fact, by Shelly Novack, a talented sportsman who died of a heart attack aged 34 (dangerous thing, sport). This Pardo will challenge the marshal (there will be a last-reel quick-draw showdown) and the gunslinger aspires to wear Garrison’s star. The boss of the town, saloon owner Colonel Bodeen, will agree, for Garrison is a broken man. You know, people with names ending in –een are almost invariably baddies in Westerns. Odd, that. 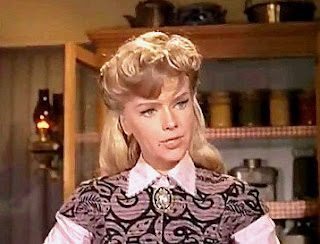 Francis is the marshal's wife

Bodeen is played by Edmond O’Brien. Westernistas will remember O’Brien chiefly for his tough old-timer Sykes in The Wild Bunch but that was when he was at the end of his career. Go back a bit, and think of his Dutton Peabody in The Man Who Shot Liberty Valance in 1962, or his starring part as railroad man Jim Vesser in a favorite of mine, Denver and Rio Grande ten years before that. I really liked him as the crazed Confederate colonel in Rio Conchos, too. In Western lore a saloon owner in a suit and fancy vest is bound to be an underhand type, and Bodeen is no exception. 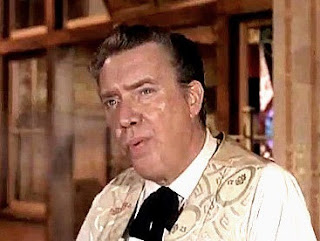 One of the best players is John Saxon, an actor I admire, as the half-breed Sioux Billy Pye. He did nine big-screen Westerns, most memorably for me The Unforgiven, closely followed by Joe Kidd, Posse from Hell and The Appaloosa. A New Yorker who studied acting there, he was nevertheless entirely convincing as a Westerner (for one thing, he rode so well). He often played a Mexican or Indian. He is a key character in The Intruders. There is a very close bond between the young fellow, who suffers racist treatment at the hands of the town, and the marshal. By the end, in fact, it’s almost a romance, although it becomes a kind of love triangle when Billy and the marshal’s wife get it together… It is Billy who is left behind wounded when the marshal hasn’t the courage to save him in a gunfight with the Youngers and it is Billy who will eventually save the lawman in another fight, but with tragic results. 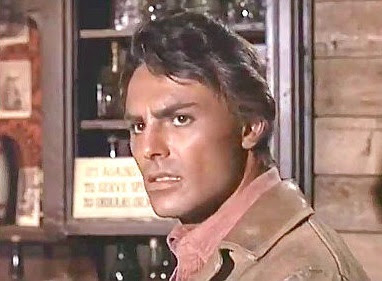 We also get Harry Dean Stanton (still being billed without the Harry) as Whit Dykstra, one of the white-trash sons of a nasty townsman Elton Dykstra (Edward Andrews). Whit’s brother Chaunce is played by James Gammon. It comes as a shock to see Jim Gammon young. I mean he is the classic Western old-timer, from Wyatt Earp to Wild Bill, The Hi-Lo Country and Appaloosa (not The Appaloosa). I didn’t think he ever was young. But he was. He is barely recognizable as Gammon in this one. 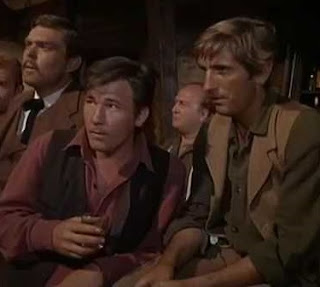 Harrison Ford is in it, ultra-briefly. He was supposed to be a townsman, Carl, and was scheduled to have a biggish role in the story. But it is said that he had an accident on the set, breaking a tooth on a gun (don’t know how that happened), and so only got one scene. It must have been a short scene, because I didn’t see him.

There is also the young lad Harold who looks up to the marshal and is in the end the only one who will stand by him. Harold is played by Phillip Alford, the kid who caused half the trouble by running off to war in Shenandoah two years before this.

But anyway the cast is quite respectable and at times good.

The picture is no epic as a Western, being only competently written and directed, at best, but the cast is good, and it has its moments. You could give it a go. 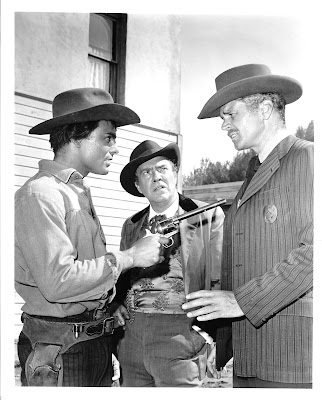 Edmond doubts the marshal, who won't draw on Saxon