Today, another of the RG Springsteen-directed Red Ryder Westerns starring Allan ‘Rocky’ Lane as Red, after Stagecoach to Denver, which we looked at the other day. Two will probably be enough: they are a bit on the samey side, to be brutally frank. Once you’ve seen one, … 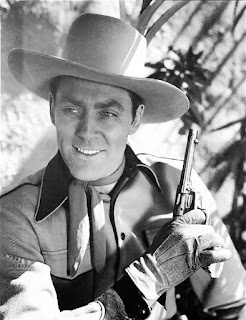 We may later look at a couple of Red Ryder pictures with Bill Elliott – they were popular too. But I guess this will be enough for now of Allan as Red.

As soon as I saw the title I pretty well knew the plot. We are going to get some sturdy settlers, all-American salt-of-the-earth types, probably led by Red, helped by Little Beaver (Bobby Blake again), and the Duchess (Martha Wentworth again) will be there too, no doubt. There will be a crook who wants the whole valley and he will certainly have henchmen to do his nefarious bidding. There may be a plot-thread to do with water – the bad guy will wish to deprive the honest farmers of necessary water for their crops and livestock, and maybe a dam will figure. 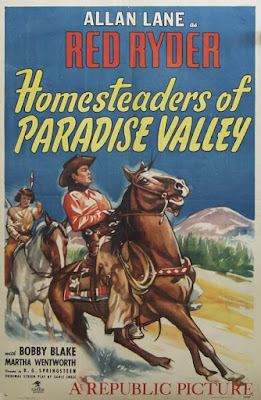 Well, all of the above turned out to be true. It was a generic Western plot. With so many oaters being churned out by the studios every year and only a limited number (according to Frank Gruber) of Western plots available, writers were somewhat limited. Earle Snell wrote these pictures, as he wrote 61 others, for all the Republic cowboy heroes. It isn’t clear how much he used the Slesinger/Harman comic Red Ryder as source; probably not at all, beyond the characters. 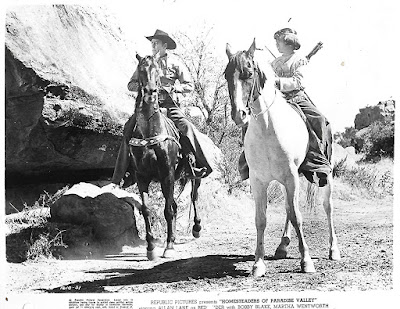 There is the occasional new twist. For example, Red edits the new local paper, writing the news as it is, with no hi-falutin’ language. He gets the rep of being the “Cowboy Philosopher”. The owner of a bigger newspaper in nearby Center City, AC Blaine (Milton Kibbee) seems impressed and offers him a job there but Red turns it down – he is far too busy leading the homesteaders here in Paradise Valley. Actually, this Blaine will turn out to be the crooked mastermind. He wants to divert all the precious water in the valley to his land, the swine.

There’s a rebellious homesteader (Gene Roth, a baddie regular in Westerns) who sets himself up against Red’s leadership. Probably a Commie. There will be mucho double-crossin’, as the bad guys fall out amongst themselves, and this and Red’s sterling leadership will bring about the downfall of their wicked schemes. 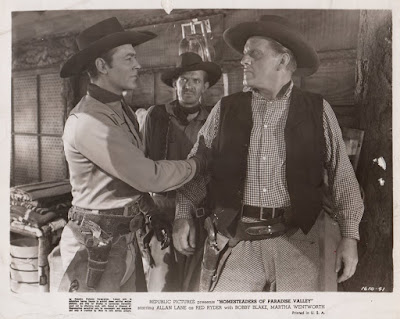 Gene is the bolshie homesteader, and that's his brother/henchman Rufe (Mauritz Hugo) in the background

It’s interesting that whenever he comes up against opposition to his wise, if somewhat autocratic leadership, Red always offers to put it to a vote. It’s the democratic American way, you see.

There’s no amusing old-timer in this one but there is some comic relief as Little Beaver falls in the canal, amid much mirth from the settlers. 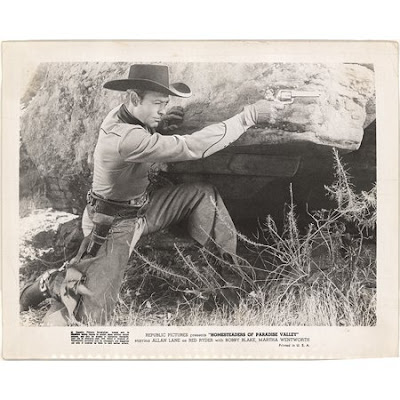 Oh well, it’s harmless enough, and was no doubt enjoyed by the juvenile 1940s audiences.

Next time, RG Springsteen again but not Red Ryder. Instead, one of his better pictures…