We’ve been talking recently about 1960s feature Westerns, pictures that were made for die-hard fans of the genre in a time when TV was taking over in a big way, yet there still seemed to be at least some kind of market in folks who went out to a movie theater to watch an oater. After all, Audie Murphy and John Wayne were making commercial Westerns through the 60s. Studios like Universal, Fox and Paramount engaged producers to put a few Westerns together. They could still make a buck or two from them. AC Lyles, most famously, produced thirteen such pictures for Paramount, using slightly aging Western stars and directors of the previous decade, while Hal Klein did a few over at Fox.  Budgets were necessarily low, the movies were often in black & white, and it was common to ‘recycle’ footage from earlier films to pad the pictures out, but the results could be quite pleasing, in a semi-nostalgic way. At Universal, Gordon Kay produced a couple in 1964, He Rides Tall, released in February, and Taggart, which came out in December. 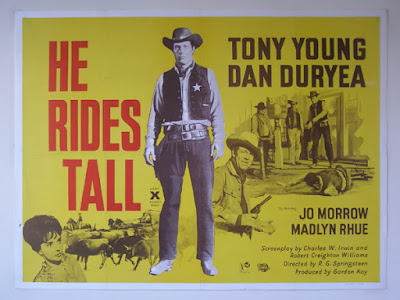 Kay, I’m sure you know, worked for Republic and Universal before starting his own independent production company. He specialized in Westerns, most notably producing the first 26 Allan ‘Rocky’ Lane pictures from 1947. Moving to Universal in 1955, he went upmarket a bit, producing several starring Rory Calhoun and Fred MacMurray and seven Westerns starring Audie Murphy (in fact Gunpoint in 1966 was Kay’s last Western).

He Rides Tall definitely has the look of a TV Western. The vast majority is shot in the studio, with a very few location shots to suggest the great outdoors, and the last part of the story being about a cattle drive, well, that’s a bit tricky. But stock footage (if you’ll pardon the pun) helped to make the herd not look too ridiculous and they just about got away with it.

The director was RG Springsteen, an old friend of ours. He worked on 56 big-screen Westerns, from a Rin Tin Tin talkie of 1936 through to two ‘retrowesterns’ for AC Lyles in 1967. He first started directing in his own right with Bill Elliott oaters at Republic in the 1940s, and he too worked with Allan Lane a lot, as well as Monte Hale. In the 50s he added Rex Allen and Vaughn Monroe to his stable. Cole Younger, Gunfighter in 1958, with Frank Lovejoy, James Best and Jan Merlin (to be reviewed later this month) was a highlight, as was the George Montgomery picture King of the Wild Stallions the year after. He helmed two of Kay’s Audie Murphy pictures in the 60s. Bud, as he was known, has been criticized for churning out pretty well the same Western 56 times but I think that’s a bit unfair. Like a lot of these workmanlike directors, he got pace and zip into his Westerns, and always delivered them on time and on budget. He was a safe pair of hands, and his pictures are always watchable. His wife Alice doubled for Gail Davis as Annie Oakley. I tell you this essential info on a need-to-know basis. 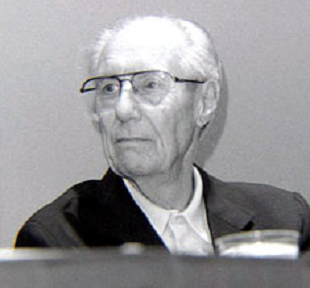 RG in later life. It's the only photo I can find.

He Rides Tall and Taggart starred Tony Young, or at least he was the straight-man hero, but in reality it was Dan Duryea who, as so often, stole the show. Tony was Carleton Young’s son and made a minor career out of TV and low-budget features. In 1961 he even got his own weekly series as a cavalry undercover agent in CBS’s Gunslinger, though it was short-lived, only lasting twelve episodes before being pulled. In He Rides Tall he plays a town marshal, Morg Rocklin, about to marry and leave the job and the town with his new bride (I think he must have been watching High Noon). We Westernistas know that anyone named Morg will be good with a gun, just like all those Coles and Clays. His fiancée, the Miss Kitty-style saloon owner, Ellie (Madlyn Rhue, from every TV sitcom and soap opera you care to name but only this and A Man Called Sledge to her Western credit), is one of those annoying ones who won’t stand by her man when he needs to strap on his gun. She ought to know that a man’s gotta do what a man’s gotta do. Women, honestly. But she does finally come round and say she’ll be waiting for him. 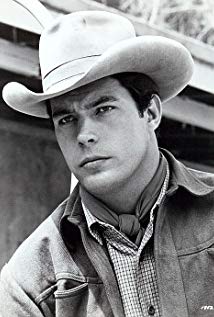 Dan is the boss of a trail herd that comes to town on Morg’s last day in office and he will overact and do that cackle he liked, as usual, the one that would make any passing hyena sound glum, and be thoroughly entertaining. You can never dislike Dan. We can only chuckle along with him as he does his shtick in Night Passage, Ride Clear of Diablo, Winchester ’73 or Along Came Jones. Laughing bad guy was his stock in trade. He was nearing the end of his career (Along Came Jones with Gary Cooper was his first Western in 1945) but he would still do a few more, such as the rather curious The Bounty Killer, another ‘retrowestern’, in 1965. I must do a Duryearama one day. 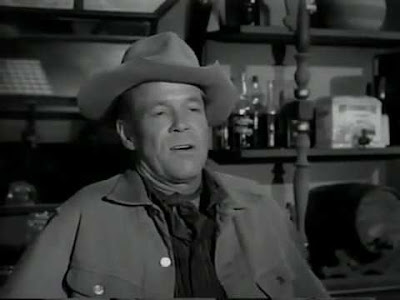 Dan is the (very) bad guy

There’s a good cast because Dan’s boss, the owner of the herd, is rich cattleman RG Armstrong. So that’s two RGs. I’m a great RG Armstrong fan, ever since I saw his utterly superb Bob Ollinger in Pat Garrett & Billy the Kid, but he was always outstanding for Peckinpah and we think especially of his roles in Ride the High Country and Major Dundee. In fact He Rides Tall came exactly between those two pictures, and he plays a similar character, really. RG specialized in the hard, tormented and bitter preacher/rancher. Think of his Boyd in From Hell to Texas. 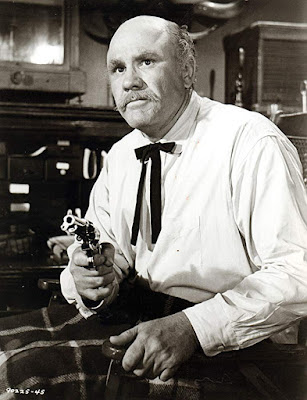 He has a son, one of those classic wastrel ne’er-do-well offspring, like Tab Hunter in Gunman’s Walk, or Earl Holliman in Last Train from Gun Hill or David Carradine in Heaven With a Gun. You know the type. Robert Walker specialized in such roles. This time it is Carl Reindel, not an actor I knew but he’s certainly a nasty piece of work in this one. Marshal Morg is obliged to shoot him in a saloon. But then, because a man’s gotta do, etc., Morg has to go himself to tell the lout’s daddy, RG, that he has killed the son and heir. That won’t be easy. And it’ll mean postponing the wedding too. Ellie is not a happy bunny. 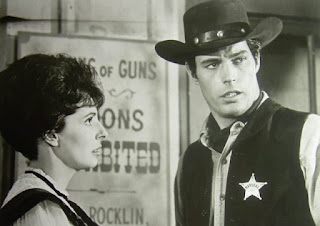 She does (eventually) stand by her man

He hands over the marshal’s badge to the new lawman (oh good, it’s Myron Healey) and sets off, but on the way Duryea takes a shot at him. Of course he gets the better of Dan, and leaves him hogtied on the ground, while he, Morg, rides off to RG’s ranch. 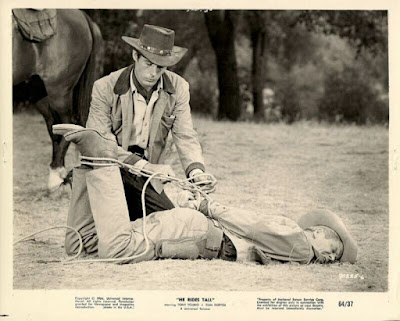 At one point the marshal leaves Dan hogtied

The rich rancher has a new trophy wife, Katie (Jo Morrow, only two Westerns). It’s immediately clear that she’s a gold digger. What’s more, once Dan turns up, having freed himself from the ropes that bound him, it is equally clear that the two are not only lovers but also in cahoots (there’s no other word for it), aiming to rob RG of his wife, cattle and money. Such perfidy. 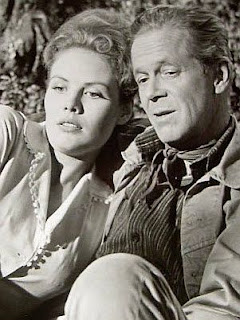 Dan and RG's wife are canoodling

More good news: Duryea has henchmen (naturally) and among them are Michael Carr and Mickey Simpson. I always enjoy seeing Mickey, especially, in Westerns. He was superb as the big-ox heavy. At 6’6” (nearly 2m) and I don’t know how many pounds, he certainly had the build for it. An ex-boxer, he’d been, reportedly, a chauffeur/minder for Claudette Colbert and had been noticed by John Ford. His first part was a tiny one in Stagecoach and altogether he would appear in nine Ford movies (you’ll probably remember him as one of Walter Brennan’s lowlife Clanton brood in My Darling Clementine). He was also Sarge, the racist diner owner who beats up Rock Hudson near the end of Giant. Western vet Harry Lauter, also often a heavy, said, “Most of the people I know that played really nasty heavies, Bob Wilke, Mickey Simpson, they are the nicest guys in the world.” 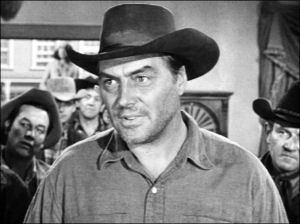 There’s a black doc (Joel Fluellen) who treats RG (he’s in a wheelchair) and stands up for Morg when RG says he’s gonna kill him for shootin’ down his boy. This doc is forced to perform a grisly operation when Duryea and Katie get him to sever the tendons on Morg’s gun hand so that he’ll never be a fast draw again. They get a drunk RG to agree. Then Duryea summons a gunfighter with a grudge against Morg (oh good, it’s George Keymas) to challenge him to draw, knowing full well that Morg can’t draw and will be killed. It doesn’t work though, because Morg stands Keymas down with sheer toughness and bravado. You can see Duryea going Grrr. 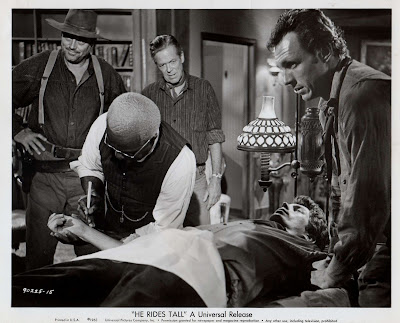 Anyway, Duryea does a bunk with RG’s wife, herd and money in the safe. “I’m rich,” says Katie. “Uh-huh,” Duryea corrects her. “We’re rich.” RG is better now, walking a bit, and so he saddles up and follows them. Morg helps him – RG seems to have forgiven him now that he’s sobered up. There’s a rather grim episode, more 1960s than 1950s, when some Indians approach the cattle drive and want the white woman. Duryea shrugs and says to Katie, “I guess this is goodbye, honey” and one Indian throws her to the ground to rape her. She stabs him, however, and in fury, he kills her. Duryea only looks slightly disappointed, then he and his henchmen just continue their drive. It’s a cynical, violent and rather jarring moment. You can’t feel that sorry for the scheming Katie though. 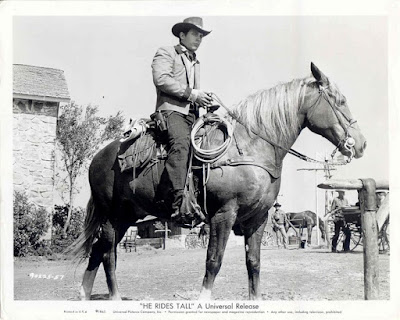 The low camera angle made him ride taller

The climax approaches, and it will be back in the (unnamed) town where it all started. That’s where Duryea wants to sell ‘his’ cattle and that’s where Morg is headed too. We get a rather good shoot-out in a darkened saloon, certainly not an original scenario but quite well staged. Finally, Morg won’t throw his star in the dirt (he wasn’t wearing it any more anyway) but he will do something similar. It’ll be off to California with Ellie, like very many a Western couple afore them.

There’s some quite stirring ‘Western’ music by Irving Getz.

I actually found this one reasonably good, and I would say a cut above many of the slightly tired 60s Westerns if its time. Critic Derek Winnert called it a “gutsy, keeping-it-real B-Western”. Yes, it’s low-budget, and as I said it does look like a TV show (the black & white and studio sets enhance that impression) but it does have a darkish tone to it, it’s well handled by Springsteen and, apart from the rather wooden hero maybe, there’s a good cast. I think that had it starred Audie it would have been a goody. As it is, 2.5 revolvers.

More on Springsteen later in the month.