Fort Utah was one of the later low-budget Westerns producer AC Lyles made to be released by Paramount, the tenth of 13, and like the others it featured some well-known Western actors of the 1940s and 50s. By the late 1960s the Western was in a state of decline compared with the glory days of the ‘50s but it still had a following – and indeed, despite dire predictions, it has never died. Nostalgia rears its unlovely head in these Lyles oaters but we fans will take what we can get. 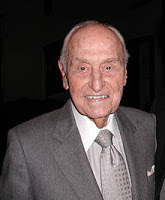 This one stars John Ireland. Nominated for best supporting actor in 1949 for his role as the reporter in All the King’s Men, during the early 1950s he often starred as the emoting, brooding hero, often in lower-budget pictures or ones for lesser studios, like Lippert. For us Westernistas he will be most remembered for his gunfighter Cherry Valance in Howard Hawks ’s Red River, his Billy Clanton in John Ford’s My Darling Clementine, and his Johnny Ringo in John Sturges’s Gunfight at the OK Corral, but who could forget also his Bob Ford in Samuel Fuller’s I Shot Jesse James, and as both director and star of the interesting Hannah Lee: An American Primitive. I thought he was also memorable in The Walking Hills, Vengeance Valley and Little Big Horn, among others. Ireland was an important figure in our beloved genre. 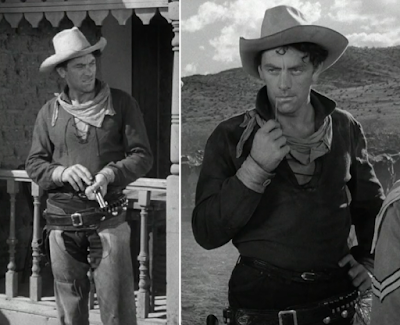 In Fort Utah he plays Tom Horn. Well, he plays a character named Tom Horn, let’s put it that way. This Horn seems to bear little resemblance to the real one. He’s just a generic Westerner who “used to be a gunfighter” and is now drifting, from nowhere to nowhere else, but he carries with him loads of know-how and he has true grit and basic decency – a classic Western hero, in fact. Ireland was 53 by then but still looked trim. 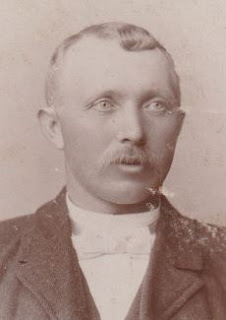 He is complemented by Virginia Mayo in the role of Linda Lee, the woman with whom he finds true lerve. This was the last of her eleven Westerns but she’ll probably be most remembered for her first, as Colorado in Colorado Territory with Joel McCrea in 1949, as well as The Tall Stranger in ’57, again with McCrea, in Westbound with Randolph Scott (one of the Budd Boetticher series with Scott), Raoul Walsh’s Along the Great Divide with Kirk Douglas, and certainly for her part with Robert Ryan in The Proud Ones. She was very beautiful and a fine actress. In Fort Utah she plays a ‘woman with a past’ who claims to be an opera singer but later admits to being a mail order bride on her way to San Francisco, even hinting at a seamier bargain with a “fancy house” there. In fact the relationship between her Linda and Ireland’s Tom is rather well handled. 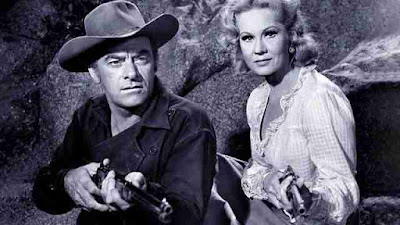 Virginia doing her Western thing for the last time

The chief heavy, though he only appears in the last reel, is the renegade Dajin, played by third-billed Scott Brady. One of the riotous Tierney brothers, he was always good as a big, bad bruiser in Westerns. He’d been Shotgun Slade on TV in the late 50s but he’d had quite a career in big-screen oaters, notably as the Dancin’ Kid in Johnny Guitar but also leading the cast in the likes of Mohawk and Ambush at Cimarron Pass. He did five of these AC Lyles pictures towards the end of his career. 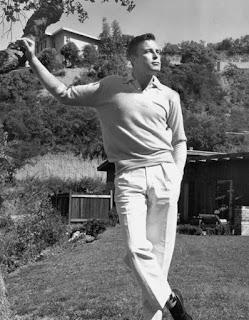 The excellent John Russell plays a rather stubborn wagonmaster guiding a wagon train through Injun territory but refusing to listen to the wise advice of ‘the man who knows Indians’ Tom Horn (they come to blows over it). I am a bit of a Russell fan, not only for Lawman on TV but for his Nathan Burdette in Rio Bravo, his Bloody Bill Anderson in Josey Wales and, especially, for his superb Marshal Stockburn in Pale Rider. Talking of Bloody Bill, Scott Brady had been Anderson in Kansas Raiders so we had two Bloody Bills in the same cast. I humbly offer you this gem of Western trivia. 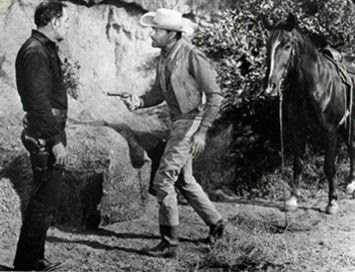 Russell excellent as ever

But the cast of old-faithfuls doesn’t end there. The list of favorite Western actors of yesteryear was one of the USPs of these movies. Richard Arlen is one of the wagon-trainers, and we know that he went right back to the silent days (his first oater was a Jack Holt picture in 1926) and he’d been Steve in the 1929 talkie version of The Virginian (the best one, with Gary Cooper). He did most of the Lyles Westerns in one role or another. Then we’ve got a rather broad-in-the-beam James Craig as a bolshie and rather bullying member of the wagon train who has in in for la belle Linda. A sort of poor man’s Clark Gable, Craig had headlined in Westerns such as Fort Vengeance (also helmed by Lesley Selander), Drums in the Deep South and Four Fast Guns. Jim Davis and Don ‘Red’ Barry are henchmen of the evil Dajin. They both come to sticky ends. And we’ve also got Harry Lauter and Regis Parton as baddies, and a rather entertaining Robert Strauss, not a great Westerner (he only did four feature oaters, two of them for Lyles) but he is good as the crusty old scout-cum-Indian Agent Ben Stokes (no relation to the England cricketer, if you know who that is) who kinda sidekicks Tom Horn along the way. 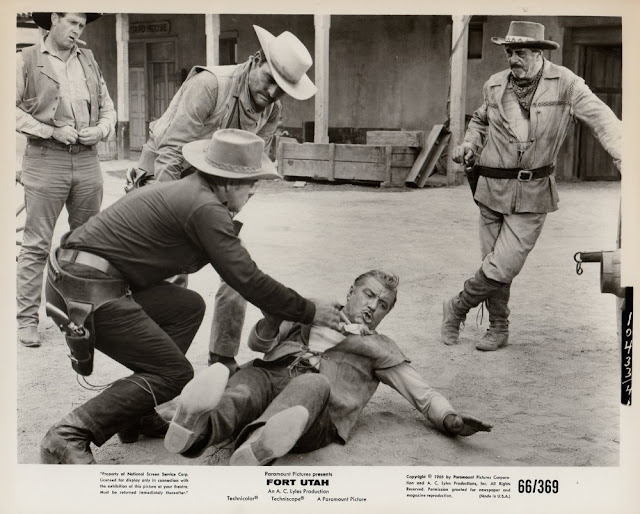 The picture was directed by good old Lesley Selander, still going strong – he’d started, as Leslie Selander, with the Buck Jones epic Ride ‘em Cowboy in 1936. Two Lyles ‘geezer westerns’, this one and Arizona Bushwhackers, were his last oaters but he was always a completely reliable helmsman, getting his pictures in on time and on budget, and managing especially well the action side. I am fond of his Shotgun with Sterling Hayden, The Yellow Tomahawk with Rory Calhoun and Tall Man Riding with Randolph Scott. He liked ‘Fort’ pictures, directing, as well as Fort Utah, Fort Courageous, Revolt at Fort Laramie, Fort Yuma, Fort Vengeance and Fort Osage. That’s a lot of forts. 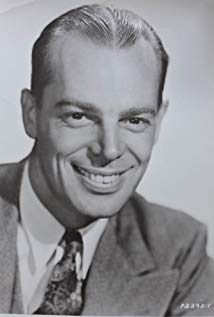 Lesley does his usual professional job

Hollywood loved fort pictures. On this blog alone we have reviewed ten of them (click on aaa WESTERN MOVIES AND TV SHOWS REVIEWED at the top of the sidebar to the right of the homepage to find them). I suppose producers liked the tension of the beleaguered garrison, the interplay between characters, the external menace, and of course the low budgets necessary to film them (they could largely be done on studio sets). Usually the forts were wooden palisades, often shot at Fort Kanab in Utah (till it burned down), whereas although in earlier times wood was often used, in post-Civil War ‘Western’ times most forts were open, unenclosed places like Fort Laramie or Fort Apache (both well worth a visit). But that's not so Hollywood. Fort Utah is an adobe place with classic Western wooden buildings inside. 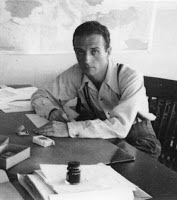 Steve Fisher (left) did the screenplay. He had worked on a couple of goodish Westerns – The Man from the Alamo and San Antone, for example – but mostly did TV work. He was Lyles’s go-to writer for these 60s retro-Westerns.

It was shot in Technicolor and Techniscope but unfortunately the print has not lasted well, at least to judge by the (Spanish) DVD I got. The image is a bit blurry and the colors lurid. Never mind, it’s watchable.

We open with Tom Horn riding and being attacked by an Indian of unspecified tribe. Horn manages to stab the Indian with the fellow’s own knife. Then Ben Stokes happens along and they clearly 'go back', knowing each other well. Together they fight off an assault by the late Indian’s compadres. Luckily the pards are crack shots with their Winchesters. They then see a wagon train and fear there will be a massacre, so Ben rides off to the fort to get help while Tom joins the train to offer assistance to the rather disdainful guy in charge, Eli Jonas (Russell). They get into a fight. Tom wins but decides to go off to the fort because Ben has not returned with any soldiery.

The fort, though, is deserted, or at least there are no troopers. They have apparently all been massacred (which saved budget on extras). Now, there are only three bad guys, renegade ex-soldiers. Tom and Ben are imprisoned but escape and manage to kill two but the third (Jim Davis) escapes and rides off to warn his boss, Dajin. The wagon train, meanwhile, has been attacked and many killed but Jonas leads the survivors to the fort, so together they prepare for the onslaught they know must come when the bloodthirsty bandit (he even shot Jim Davis) arrives. So now the Indians are no longer the bad guys, it’s the white renegades.

It transpires that the reason that the Indians were on the warpath at all was because the wicked Dajin attacked a village and slaughtered the inhabitants. Now the Indians are out for Dajin’s blood.

Well, there’s a big climactic fight, as we expected, and there are various casualties on both sides but the goodies are plucky and resourceful and win the day on balance (no spoiler here, I think) and Tom did at least have enough spare time to romance Linda, so that they can go off together at the end. The evil Dajin gets killed twice (you’ll have to watch it if you want to find out how).

It’s all done on the cheap, with padding from footage from other Westerns, plenty of studio shots and so on, but there are a few Vasquez Rocks locations and the whole thing just manages to pass muster. The release date belies its ‘tone’ – it’s a straight 50s Western with no hint of revisionism, and no 60s sex or blood. No bad thing. 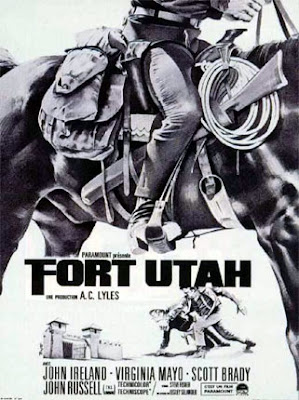