Recently we were looking at Fort Utah, one of the dozen or so low-budget mid- to late-60s retro-westerns put together by AC Lyles and released by Paramount, featuring actors of the decade before. Well, Lyles wasn’t the only producer to try that on. Over at Fox, Hal Klein had the same idea. There was still some kind of market for ‘old-fashioned’ Westerns. Klein had started oaters as assistant director on Three Young Texans in 1954 and had worked on White Feather (1955) and Pawnee (1957) before concentrating as producer on TV (Klondike, Bat Masterson and Tombstone Territory). In 1965 he put together three big-screen Westerns made along 50s lines, ‘straight’, rather un-1960s black & white pictures with modest budgets, few pretensions, and recycling some 50s Western actors. They were War Party, released in March, Fort Courageous (May) and Convict Stage (June). All three were directed by our old friend Lesley Selander, about whom I was waffling the other day, a safe pair of hands if ever there was one. He could have directed this one in his sleep if he'd wanted.

Brian Garfield in his guide Western Films dismisses Fort Courageous with the words “Forget it.” Myself, I think it’s not a great Western, far from it, but it does repay at least one watch. It bears many similarities to Fort Bowie, the Bel Air production released in 1958 by United Artists, and indeed some of the battle scenes are lifted directly from that picture, so I guess Klein had acquired the rights, though Fort Courageous is an unacknowledged remake. There are differences, to be fair. Fort Courageous is actually even closer to another, earlier Selander picture, also a Bel Air/UA one, of 1957, Tomahawk Trail (review soon). In that one too an officer leads his patrol into an Apache ambush, gets wounded, and loses the command to his sergeant (Chuck Connors). 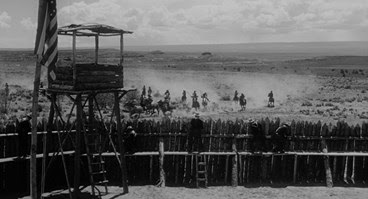 Tomahawk Trail and Fort Bowie weren't great Westerns but they had one big advantage over Fort Courageous: Connors wasn't bad in the first but Ben Johnson, pretty well an ideal Westerner and also a superb actor, led the second. Courageous, however, headlines Fred Beir, not a top Western actor by any stretch of the imagination. He does his best, I guess, but Ben Johnson he wasn't. Mr. Beir worked mostly in TV, where he appeared in sixteen episodes of various Western shows, but he only did five big-screen Westerns and two of these were Hal Klein ones and two were spaghettis (the fifth was an uncredited bit-part in Border River). He plays a sergeant, in manacles having been court-martialed for rape, of which crime he was, naturally, totally innocent. The colonel’s wife had tried to seduce him, then in pique accused him of assaulting her when he declined her advances. We sense right away that he will be the hero and save the day. 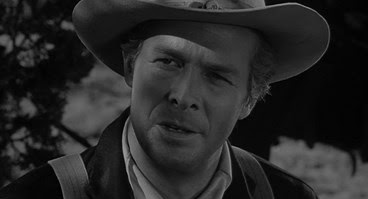 Second-billed, though with a much smaller part, is Don ‘Red’ Barry. By the mid-60s Don’s career was rather in decline. He had peaked in the Republic serial Adventures of Red Ryder, from which he got his soubriquet, in 1940, and then studio boss Herb Yates got the idea that Don could be the new James Cagney, doing for Westerns what Jimmy had done for gangster flicks. Don was also short, feisty and scrappy. Unfortunately, he was not an easy actor to work with. At Republic William Witney loathed him, calling him "the midget", and director John English worked with him once and refused ever to work with him again. By the 1950s Barry’s career had pretty much ground to a halt, and he was reduced to making cheaper and cheaper pictures for minor companies like Lippert and Screen Guild. He continued to work and still appeared in Westerns through the 1970s, but often in small supporting roles, sometimes even uncredited. In 1980 he committed suicide by shooting himself. A sad tale. In Fort Courageous he takes the part of the martinet by-the-book fort commander who is bitter at having been retired and not very competent when the Indians attack, the brave sergeant having to do most of the strategic and tactical work. 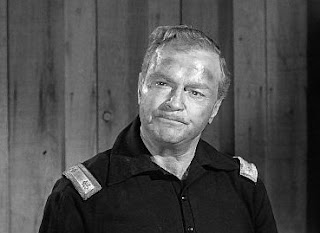 The best role goes to Harry Lauter, who is also the best actor on the set, as the grizzled scout Joe. You know Harry, I’m sure. It’s probably time for a Lauterama Western retrospective on this blog, and I must get round to that, but for now suffice it to say that although he only once came close to Western stardom, as one of the leads in Tales of the Texas Rangers on TV in 1955, he was a mainstay of the genre in character parts, especially as bad guy. “I like to play the heavy,” Harry once said, “because they pretty well leave you alone, unless you go overboard. I love the heavies, and I love the reaction I get from people. ‘Why are you so mean on screen? You're not a mean guy at all’. Most of the people I know that played really nasty heavies, Bob Wilke, Mickey Simpson, they are the nicest guys in the world.” Harry was once Jesse James, in the 1955 Z-Western Outlaw Treasure, so that’s good. He was in 52 feature Westerns and over 250 episodes of different Western TV shows, so respect, dudes. He started in Allan Lane oaters in the late 40s and his last one was another Klein production, Barquero in 1970. His distinctive mug pops up in countless Westerns and it’s always a pleasure to see him. He got the lead in Convict Stage, justifiably so, but in this one he got the juiciest part. 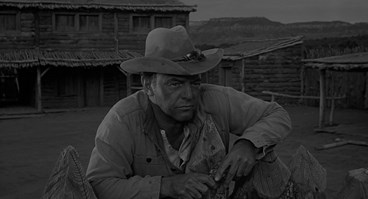 Harry is the Army scout

The scene shifts between the desert, where the Army patrol makes a grueling march tortured by the sun and beset by Indians, and the fort, equally under attack and short of water. There were some decent Arizona locations for the desert part and good old Kanab, Utah was the fort, as in so many ‘fort’ Westerns. Actually, the modern print is very good, shot in a nice black & white by Gordon Avil, who had started Westerns right back in 1930 on the Johnny Mack Brown Billy the Kid, the King Vidor one. Eventually the two stories mesh, as the remnants of the patrol reach the fort and unite with the remnants of the garrison (it’s pretty well only Don) to defend the place against the hostiles.

Kanab movie fort, seen in many Westerns (until it burned down)

There has to be some love interest, of course, and that is provided by a remarkably stupid traveler, played by Hungarian actress Hanna Landy, and her daughter (Cheryl MacDonald). They are, very improbably, traveling alone across Indian territory. Early in the movie their wagon is chased by Indians and the dumb mother tells the girl to run, so that she is, inevitably, caught by the pursuers and raped (though it’s 1950s in style, not 1960s, so we don’t actually see that part; we just get some overacting in the reaction shots). The mother will be attracted to the brave sergeant, and, let it be said, vice versa, and sure as eggs is eggs, they will go off together at the end for a new life. Actually, quite a few of the characters do seriously dumb things, so that you want to cry out, “Don’t!”, or at least you say, “Doh.” 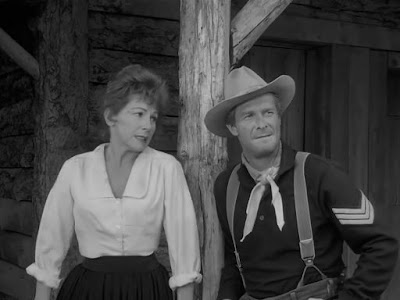 It will be lerve

Walter Reed is the drunken Army doctor. You probably know Walter, much used in lesser parts by John Ford, 29 appearances in feature Westerns between 1948 and 1969, plus being Indian boy, uncredited in a Richard Dix silent movie back in the 20s. 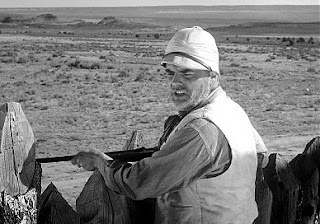 The Indians are just faceless sanguinary savages of a very one-dimensional type that was passé even by 1950 (the year of Broken Arrow) and certainly very out-of-date by 1965. 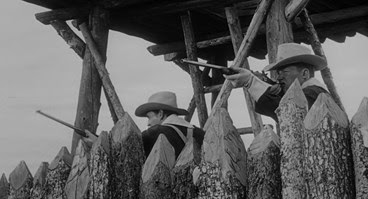 Funny what unerring aim the Indians always have, striking the protected troopers with their arrows while the soldiers' shots rarely hit the exposed attackers. You'd have thought the defenders would have a distinct advantage.

Some of the writing (Richard Landau, Four Rode Out and The Great Jesse James Raid) is pretty clunky. “It’s awful quiet.” “I don’t like it.”

There’s a rather too pat ending.

Oh well, I have seen worse. 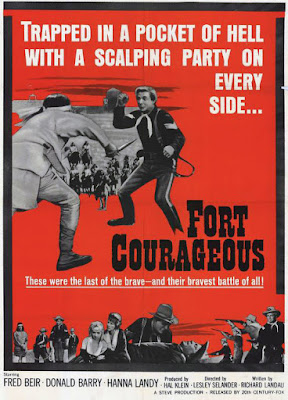