Dale's first but not one of Roy's best

San Fernando Valley was in many ways just another Roy Rogers oater like the pre-war ones we reviewed recently,those first four Republic Westerns in 1938. San Fernando runs for just over an hour, is in black & white and to be brutally frank is more of a cheap rom-com than a Western (there’s hardly any skullduggery). Studio boss Herb Yates wasn’t splashing out (he didn’t really do splashing out) on Trucolor yet, and Roy wasn’t quite the superstar he would soon become. So not much new here. But the picture was notable (if notable at all) as the first of the Rogers sagebrush sagas to be directed by John English, and the first to feature Dale Evans. 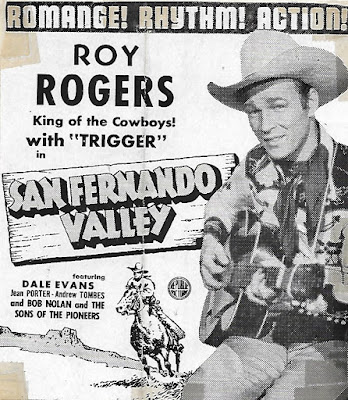 John English (1903 to 1969) was exactly that: he was born in Cumberland in the North-West of England. His family moved to Canada when he was young and Jack went to the US from there. In the 1930s and 1940s he directed Zorro and Lone Ranger serials for Republic in partnership with his friend William Witney. His first Westerns were six Kermit Maynard efforts in 1935, then he moved on to Tim McCoy. With Witney he directed Red Ryder with Don ‘Red’ Barry and went on to do those Bob Steele/Tom Tyler oaters in the 40s, but he worked with many of the classic screen cowboys at one time or another, Allan Lane, Bill Elliott, Robert Livingston, et al, and then did a run with Gene Autry. He would direct three Rogers big-screen features and then The Roy Rogers Show on TV between 1951 and ’57. English was a key figure in the ‘series’ Western. (Sadly I can’t find a photo of him; do leave a comment if you know of one).

As for Dale, she and Roy met on this movie. They would celebrate a celluloid marriage in the last reel but in reality they would marry on the last day of the year 1947. Rogers was twice married before, divorced from his first wife and a widower of his second, while Evans had been thrice divorced before she wed Rogers. The two became of course a famous team on- and off-screen from 1946 until Roy's death in 1998. Her career began singing at the radio station where she was employed as a secretary. She got a screen test and a contract at Fox, then moved to Republic, where this was her first movie. 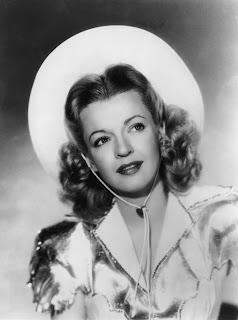 There’s no sidekick. Gabby Hayes started with Roy in '39 but he wasn't in all of them. The (not so) comic relief on San Fernando was provided by Edward Gargan (in his only Rogers oater) as Roy’s rather disreputable friend Keno. He is backed up by Dot Farley as ranch forewoman Harriet O’Toole and Doodles Weaver as a hotdog salesman. 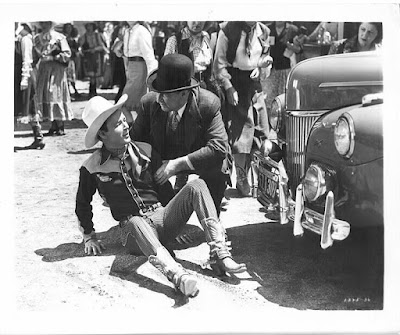 Dale runs Roy over. Naturally it's his fault.

English put in the usual chases. Actually he had three runaways being saved by the hero this time, which was over-egging the pudding a bit. But there are few fights, no crook with henchmen wanting to take over the whole valley, and eight songs, which was rather a lot. There’s much riding those fake horses with scenery rushing by in back-projection. The plot is paper thin. Honestly, this was far from Roy’s best Western. In fact I think it was one of his weakest. There is a kleptomaniac dog, Willy, so that’s something, and we do get Bob Nolan and the Sons of the Pioneers, but all in all I don’t think this one was Oscarable material.

Of course if you are a Roy Rogers fan and would like to see Dale’s debut, fine. 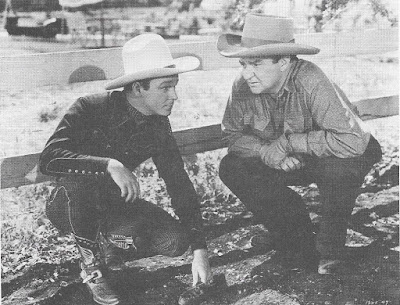 Roy and his pal Keno want to find some horse rustlers