Rex and Slim ride together for the first time

Following our conversation the other day about sidekicks (click the link for that) I thought we might have a look at the very first of the series of oaters that Rex Allen made with Slim Pickens as the comic relief (for if truth be told, Rex was, like most of the cowboy heroes of the silver screen in those days, a bit ‘straight’, and needed some leavening). Rex started out as a singer in vaudeville, and sang on numerous radio shows before hooking up with a traveling rodeo show. He said later, “My dad was a fiddle player. He used to play for all the dances and stuff, and I learned to play guitar when there was nobody to accompany him. And then I sang in all the church choirs and glee clubs in the school. Basically, all I ever wanted to do was try to be a singer and make a living at that. And then, I went into radio and the recording field, and had a few hit records. Roy Rogers was getting ready to leave Republic Pictures and get into television, and they were looking around for another poobah in a white hat, so I got my foot in the door there.” So Rex came quite late onto the singing-cowboy scene. But he made a good fist of it. Probably because he was a cousin of Glenn Strange the Great. 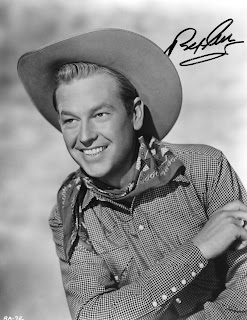 Star of the silver screen

He said he tried to be different but to be brutally frank, he wasn’t. “I didn't want anybody to say, ‘Well, he's copying Roy Rogers’ or ‘He's copying Gene Autry or ‘He's copying Hoppy’. So I purposely looked for a horse that was different, that no cowboy had used -- I turned my guns around backwards, and didn't know for two years that Bill Elliott did it, too. I just didn't want to be accused of copying anybody else, so I tried to go in as opposite a direction in everything that I could.”


His first picture was The Arizona Cowboy (1950) and he’s billed on the title screen of this one too as Rex Allen – the Arizona Cowboy, though he said, “I'd like to find the damn negative of that thing and burn it. It was the most horrible thing ever made. Boy, was it bad.” He made nine Westerns in 1950 and ’51 before starting the series with Slim Pickens. 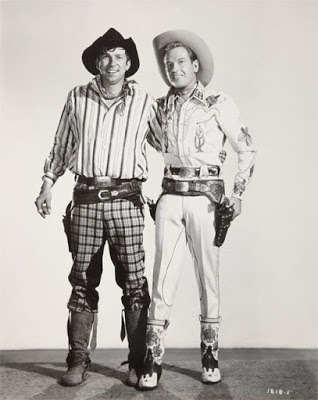 You have to admire their dress sense (not)

As for Slim, what a great Western actor he was. I have written about him elsewhere (click here for that) but now, just to say he was an ex-rodeo clown (a dangerous and skilled profession) who had a real comic talent, though he could also play straight Westerns roles supremely well. Apart from appearing at one time or another in episodes of pretty well every Western TV show you care to name, he also did 55 feature oaters, from 1946 on (this was his fourth) and was also memorable in the likes of The Outcast, The Last Command, Santa Fe Passage, The Big Country, The Sheepman, and Major Dundee - he was fine for Sam Peckinpah, most especially in Pat Garrett & Billy the Kid. He was the stage driver in the 1966 remake of Stagecoach, taking the role Andy Devine had done in John Ford’s original. He threw himself with gusto into the role of Rex Allen’s sidekick and gave some much-needed fun and zip to the series. 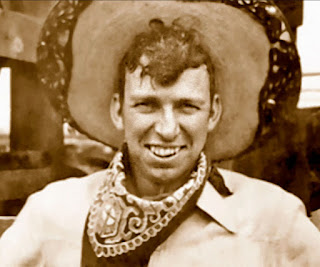 What a great Western actor!

Ten of the dozen Rex/Slim series were directed by William Witney, including this one (Harry Keller helmed a couple) and Witney we know was a real vet. He’d worked on serials at Mascot through the early 30s and when in 1935 Mascot along with other small studios merged into Republic he came into his own. He and his colleague John English churned out fast-paced actionful oaters, especially good on chases and fights (and there are plenty of both in Colorado Sundown). Witney wrote two entertaining memoirs, In a Door, Into a Fight, Out a Door, Into a Chase and Trigger Remembered.

Bill Witney a great figure of the Western

Despite studio boss Herb Yates’s famed penny-pinching there some attractive San Bernadino National Forest locations (though much padded out with stock footage from previous movies). Of course it’s just a typical low-budget one-hour black & white oater but it is done with energy and pzazz.

The plot owes more than a little to Gene Autry’s 1949 Columbia picture Riders of the Whistling Pines. It’s a logging story (Hollywood liked those) in which two unscrupulous and crooked lumber company owners, very well played by June Vincent and Fred Graham as the Hurley siblings, want to fell all the timber around to make money, faking an excuse that the trees are infected, even though the deforestation will cause flooding and natural disaster. Like Whistling Pines, the movie is quite eco for its time. Slim has inherited a ranch which the wicked Hurleys covet (it’s well stocked with timber) but he is surprised to learn that the Hurleys, and also the glam Jackie Reynolds (glam Mary Ellen Kay, third billed after Rex and Koko), the deceased owner’s great-niece, are also co-heirs. 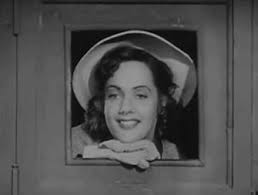 Slim and Jackie are more than ready to get along and share but of course the evil Hurleys will have none of it. They want it all and will stop at naught (naught, I say) to get it. Rex has come along with Slim to Colorado from Texas to make sure he’s not defrauded or cheated out of his inheritance. Luckily. 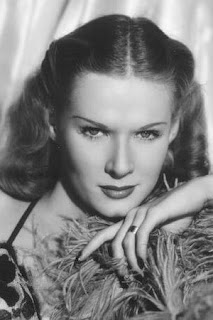 Jackie is accompanied by a large ‘Negro’ maid, Mattie, for more comic relief. It was OK in those days. Mattie is played by Louise Beavers, who was condemned to many such roles and she would in fact be Clover the housekeeper in Rex’s TV series Frontier Doctor. Mattie also has a companion, Manhattan, a scruffy white mutt, and the horrible Hurley will shoot him. Luckily he will recover. Phew. 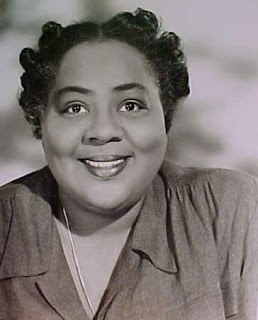 Louise did many comic maid roles

Of course Rex rides his chestnut Koko. Koko was second-billed in the cast list, as had become the norm with the nags of other cowboy stars, and is called “The Miracle Horse of the Movies”, although he doesn’t do anything special or miraculous in this movie, just carts Rex about (at some speed). “Champion the Wonder Horse” and “The Smartest Horse in the Movies” (Trigger, of course): Rex had to have his own. Koko has his own page on IMDb (fair enough) and we are told:

KoKo, ‘The Miracle Horse of the Movies’, was a white-maned, white-tailed chocolate-colored chestnut stallion trained by Hollywood's premier equestrian specialist Glen H Randall Sr. (as was the legendary Palomino Trigger ridden by Roy Rogers). It was purchased from Randall at the age of ten by cowboy actor Rex Allen. Rumor had it that KoKo was at one time earmarked for Dale Evans but was too difficult for her to handle. In any case, KoKo became Rex Allen's trusted and much loved steed and went on to perform as a trick or stunt horse, co-starring in a series of westerns Allen made for Republic between 1950 and 1954. KoKo also headlined with Allen on the rodeo circuit and (according to an interview in 1997) in "theaters, and auditoriums, nearly every summer. I'd go back for eight days and do a film and go back to the road. Take the horse and load 'im up and grab a few musicians." Allen also mused that he had more requests from fans for photos of his horse, than of himself. One of KoKo's offspring, a close lookalike, was named KoKo Jr. but ultimately did not live up to his father's illustrious reputation. Unlike Trigger, KoKo did not end up as a museum exhibit but was eventually buried on Allen's ranch near Tucson, Arizona.

So now you know. 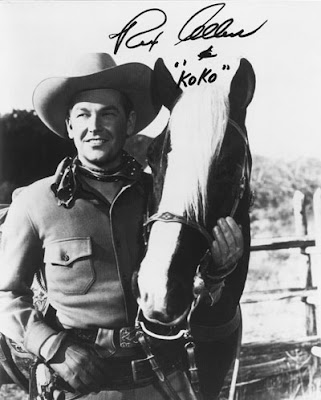 The star (with co-star left); Rex said Koko got more fan mail than he did.

There are, naturally, several songs. Even Slim joins in one. The lead singers, Rex and Mary Ellen, are backed by The Republic Rhythm Riders, in their cinematic debut. Pine Valley Stage is chirpy and Under Colorado Stars romantic. There’s a stirring version of Down by the Riverside as the boys labor to pile sandbags to shore up the levee. Rex had a passable voice.

Harry Harvey is the local doc, Russ Conway is a forest ranger poisoned by the wicked dame, and even Rex Lease gets a bit part (he was down to bit parts by this time) as Rancher finding dog (uncredited).

There’s much skullduggery but of course Rex and Slim save the day. Slim has promised his late lamented ma that he will never fight, and he carries a picture of her which comes to life and talks to him (it is of course Slim in drag) but luckily, before the final bust-up she absolves him of the promise so that Slim may participate fully in the fisticuffs. 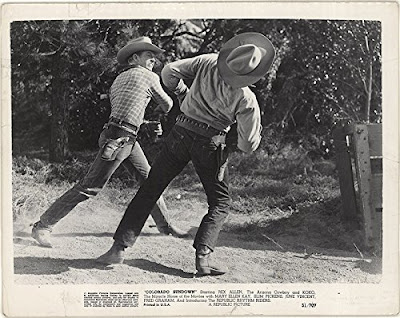 There’s also a bit of business with a goat butting backsides (chiefly those of Mattie and Slim).

The whole thing is harmless fun, and by no means the worst of the singing-cowboy dramas.

It was followed by The Last Musketeer, with a similar cast, the following month, which, you will doubtless be THRILLED to learn, we could just possibly shortly be reviewing. 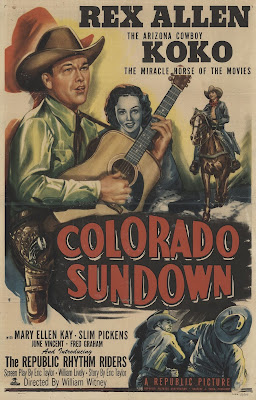