As I have said in my articles on John Ford and Harry Carey (click the links for those), the early Western movies produced by the director and star at Universal Studios were pioneering and influential examples of the genre. One of those motion pictures to survive (for, sad to relate, many have not) is Hell Bent, a six-reeler of 1918, which was for a long time thought to be lost but a copy of which surfaced in the Czech national archives, and can be watched today. It makes rewarding viewing for a Western buff. 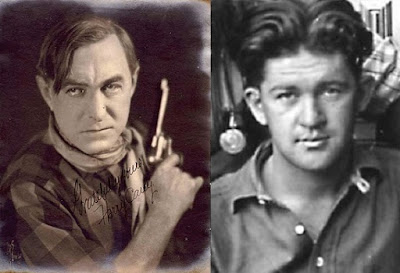 The title seems to be a nod to Hell’s Hinges (1916) and indeed there are distinct similarities between the two films. Carey’s character of Cheyenne Harry in Hell Bent is close to William S Hart’s Blaze Tracy in Hell’s Hinges, and in fact it was a standard Hart role – the good badman, or fellow who has erred and strayed but who is redeemed by the love of a good woman. Carey and Hart shared a sober and restrained acting style which was at variance with much of the over-the-top antics of many silent movie actors, especially the early screen cowboys who went for gaudy costumes and spectacular stunts. Even the locations: Ford made use of Newhall Cut for his outlaws’ lair, a favorite locale of Hart (whose ranch home was nearby). 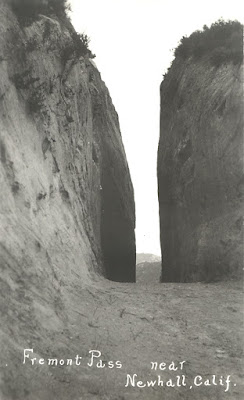 But in other ways the pictures are distinct. Jack Ford (as he was then) was already developing a personal visual style. As Bob Lipton writes in a review of the movie on IMDb, Ford “uses objects to frame his performers, changing the size of his canvas to focus the audience's attention. When people stumble in the empty desert, somehow it's by a random pile of brush; people stand in narrow doorways (a shot he would use to bookend THE SEARCHERS forty years later). Ford spent his early years building up a lexicon of shots and his later westerns make use of them.” There is also a (rather unFordian) use of the iris shot, perhaps to highlight the slightly comic subject (iris shots were a standard of the silent-movie comedy), or perhaps it was just the young Ford experimenting. Certainly the location shooting, and there is a fair amount of it, is pretty good.

The film has a creative and innovative start as a modern writer receives a letter describing his stories as unrealistic, and, pondering this criticism, he gazes at a print on his wall of The Misdeal, by Frederic Remington, showing the aftermath of a card game gone wrong, with bodies on a saloon floor. Gradually this picture ‘comes to life’ because it is a tableau vivant cleverly staged by Ford. Cheyenne Harry seems to have been involved in card sharping and narrowly gets away with his life. An angry posse has to stop its pursuit of him at the river which marks the border with 'Gil County' (I suppose it must be Gila County, AZ). 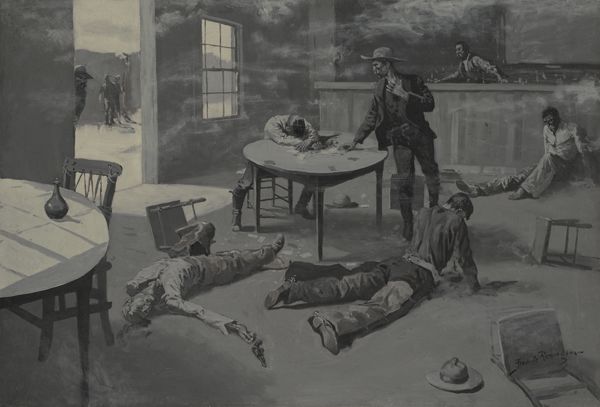 Harry is clearly intoxicated. Prohibition was still two years in the future when the movie was made but there was enough moral disapproval of alcohol about in 1918 to mark out Harry, a drinker, as a no-good. Later he will also make crude advances to a nice girl in town. So all in all, card sharp, boozer and lothario, he is definitely a character in need of reform and redemption, even if ‘good at heart’.

The outlaw Beau Ross (Joe Harris) is terrorizing the town of Rawhide and its environs. We see him and his gang as they hold up the stage. He’s credited as Beau and introduced as such but he becomes Bean Ross later, for some reason. Harris was a lifelong friend of Carey’s – in fact he lived with the family, dying only in 1953 – and he appeared in more than twenty Carey Westerns. He was one of the 'three godfathers', along with Carey and J Farrell MacDonald, in Ford's 1926 version, Marked Men. We know that Harry and Beau will cross swords – or firearms anyway – probably as rivals for the hand of a fair maiden, and so indeed it transpires. 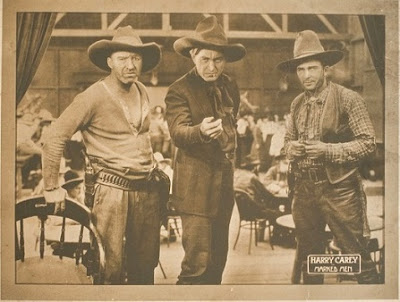 We also meet the local Wells, Fargo agent, Thurston, who is a bit of a scoundrel, and in fact he will end up in league with outlaw Ross, the skunk. Thurston is played by Vester Pegg, the habitual baddie in these pictures. He somehow looked the part. He stayed with Ford for years, and was Hank Plummer in Stagecoach. Thurston has a sweet little sis, the rather demure Bess (Neva Gerber, a Universal regular), and she will of course fall for Harry - and, let it be said, vice versa. Beau Ross fancies her too but he, though outwardly gentlemanly and gallant, is in reality a bit of a swine, while Harry, though at first appearances a bit of a scruffy saddle tramp, actually, as we know, has a heart of gold. So we have a pretty shrewd idea which suitor will finally win her hand, for goodness will triumph over smarm every time. In silent movies anyway. 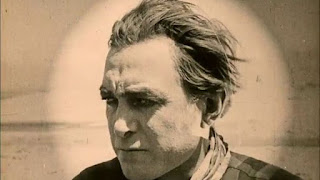 Another strong character is Cimmaron [sic] Bill, played by second-billed Duke Lee. Harry first meets the feared gunfighter Bill when, drunk again, he decides to evict Bill from the hotel so that he may take over his room. He rides his horse into Bill’s bedroom, where the nag starts chomping on the mattress straw, much to Bill’s annoyance. But Harry pulls a six-gun on Bill and obliges him to jump out of the window into a midden. Bill then grabs a gun in the Best Bet Saloon downstairs, returns to the room and returns the compliment. But after these defenestrations the two become best friends and spend the night drinking and singing together (the drinking is not shown but the hangovers are). Bill will save Harry in the last reel when he finally has his showdown with Beau in the desert. Duke Lee was the sheriff in another Ford picture, Just Pals, for Fox, with Buck Jones, and was also member of the Universal company much used by the director. 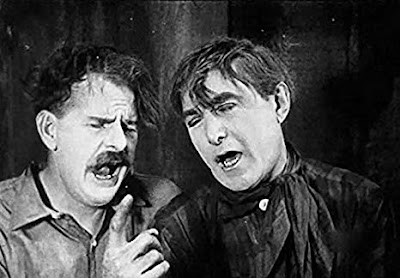 There are quite a few visual gags en passant such as when Harry sees a pair of identical twins and thinks he is seeing double. It’s only five seconds but it’s funny and sticks in the memory. At one point Harry drinks tea (he is disgusted) and at another he gives the girl a puppy. But when Ross and Thurston attempt to rob the Wells, Fargo office we see the tough side of Harry. He gets his Winchester from its saddle boot (he doesn’t wear a gunbelt) and foils the robbery.

There’s a climax out on the desert when Ross kidnaps Bess and makes a dash for it to the Rio Grande across the sand. There's quite an impressive sandstorm. Harry follows and they finally shoot it out, with both being wounded. Harry gives the girl the only horse (there are a couple of really brutal horse-fall scenes which made me quite unwell but that was common then) so that she may return to safety while he and Beau walk, then stagger, then crawl through the roasting desert. I wonder if Carey's son Harry Carey Jr. had seen this film when he did something similar for Ford in 3 Godfathers thirty years later. Dobe didn’t mention it in his detailed account of the filming of that picture in his book A Company of Heroes.

The final scene shows us Harry proposing to Bess, with Bill providing the musical accompaniment as he sings their song, Oh Genevieve. 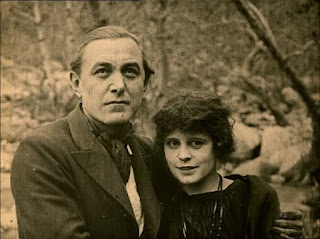