There’s a whole sub-genre of ‘logging’ Westerns, stories in which the brave hero dominates the ancient forests while beating out bad guys on the side. We think of The Big Trees, Guns of the Timberland, King of the Lumberjacks, Law of the Timber, The Timber Trail and so on, pretty well ad infinitum. The idea went right back to the origins of the Western: in Blue Blazes Rawden (1918), William S Hart led a crew of “lumber jacks” known as Hell’s Babies, “virile, grim men of strong pleasures and strong vices”. Just a couple of weeks ago we were reviewing Take Me to Town, in which Sterling Hayden was a logger who was also a village pastor on Sundays. Only a couple of years after that he was back in the timber business in Republic’s Timberjack.

It was the sort of picture that studio boss Herb Yates would have cast John Wayne in ten years before, a picaresque Westerny tale of derring-do with Yates’s fomer, er, protégée Vera Ralston, Mrs. Yates since 1952, cast as female lead, a sort of Dakota in the trees. But Wayne hadn’t done a Republic Western since Rio Grande in 1950, and actually wasn’t even starring in Westerns at all (he did no oaters between Hondo in ’53 and The Searchers in ’56, both for Warners), being more into producing at that time. 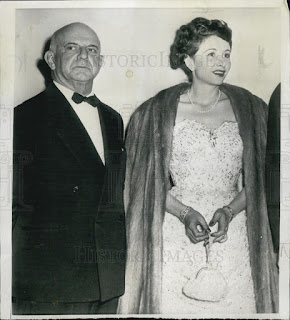 So Sterling Hayden got it, and had to pretend to romance Vera. He also had to suffer the character name of Tim Chipman (oh, please) but he did his best to soldier through the movie. It was the thirteenth of the nineteen Western movies he did (well, eighteen and a spaghetti). He roundly detested them, calling them “wretched”, but he needed the money for his sailboat and for alimony (he was a serial divorcer, though three of his five marriages were to the same lady). He got $200,000 plus a share of the profits for this one - good money for Sterling. 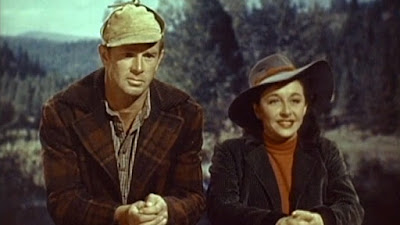 Most of these timber stories were set in the northland, even in Canada sometimes. This one was filmed in the Glacier National Park and there’s some handsome Montana scenery shot in Republic’s Trucolor process by studio stalwart Jack Marta.

There are too many songs (five), starting with a cheesy Ned Washington ballad under the titles and continuing with saucy songs by saloon-owner Vera (as a singer she made a good actress, and she was a lousy actress, though there is a suggestion that the songs were dubbed, in which case the dubber wasn’t very well chosen either). Actually, the authors of the book The Golden Turkey Awards nominated Ralston for the  honor of 'The Worst Actress of All Time' - but she lost to Raquel Welch. The only good song in the movie is by her partner, Mr. Jingles, played by the great Hoagy Carmichael, reminding us a bit of his role in Canyon Passage, in '46, who sings an ironic hymn of praise to his mutt, Napoleon (disgracefully uncredited). In one of the songs, the overlong Every Young Girl Should Know, the dog is seen to yawn. Obviously a canine with good musical taste. 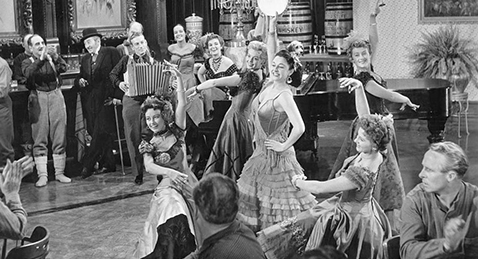 Hoagy on the accordion. You can just see Napoleon on the piano, though he is regrettably mostly hidden by the ladies.

The town we are in is Vermilion, and she is known as The Vermilion Belle. Funny, that, because Sterling Hayden's inamorata in Take Me to Town was also Vermilion, that time played by Ann Sheridan. Her dad is a scoundrelly lawyer, known as Swifty, played quite amusingly by Adolphe Menjou, with ultra-flowery dialogue. They are all supposed to be Swedish, though Adolphe was of French parentage and Vera was born in Prague. But hell, they’re all European, ain’t they? The characters just talk about “the home country” without being more specific than that. 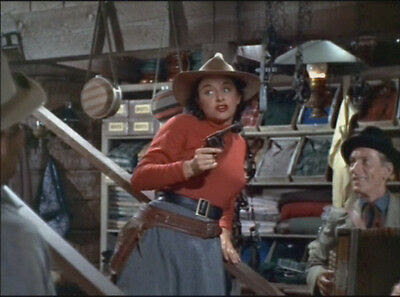 Vera does yet another song

Tim Chipman arrives back in Vermilion (carrying an obviously empty suitcase, as they always do) after a twelve-year absence. He has received news that his poppa has been seriously hurt and on arrival finds that it is worse than that: daddy has expired of his injuries. Chipman père was co-owner of the local railroad and now his partner, Croft Brunner, has appropriated the railway entirely to himself. He probably did in his former partner to get it. But Tim has different ideas about ownership of those trains, as you may imagine. Some good news: Brunner is played by third-billed David Brian, classic Western heavy (see, for example, his megalomaniac Blair Lunsford in Fort Worth in 1951, his gang boss Austin McCool in Springfield Rifle in '52 and his saloon owner Dick Braden in Dawn at Socorro in '54). So we have a blond as both chief good guy and chief bad guy; that’s unusual. 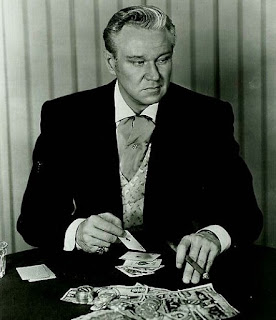 Three henchmen of Brunner’s, led by Axe-Handle Ole, a Swede whose favorite weapon is not hard to guess, played by an actor as Swedish as Massachusetts-born Howard Petrie (Bend of the River, Rage at Dawn), beat Tim up. I always hate it when two men hold a fellow and the third punches him; such base cowards. Vermilion Belle and Jingles get him back to safety and patch him up. Vermilion was clearly a former flame of Tim’s, all those years ago, though now she is Brunner’s intended. But she yet hankers after the handsome son.

Tim has his own men, chief among whom are, oh good, Chill Wills, as Riika. But they include two perfidious Frenchmen (Ian MacDonald, Frank Miller in High Noon, and Wally Cassell) and these lowdown skunks will rat Tim out to Brunner. Tim and Riika want to get their hands on a stand of pristine timber, and they need a train to ship it out. But of course Brunner wants those trees too and he has control of the railroad – for now. So it’s all set up for action aplenty, especially when Brunner hires in outside gunmen, led by Republic regular Jim Davis. With the blond hunks rivals over both the woman and the timber you can tell they will be at, er, loggerheads.

Brunner is a tough egg, perfectly willing to punch out his enemies and not relying only on his thugs to do it. And he murders his lawyer, Vermilion Belle’s dad, dumping the body on Tim’s land, the varmint. He might have got away with it too but he forgot the lawyer’s hat… 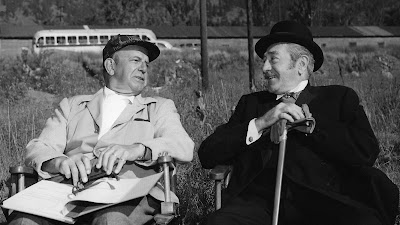 On the set. Adolphe seems to be enjoying himself.

In the end Vermilion Belle will decide between the two suitors, goody and baddy, by shooting the baddy in the arm, though director Joe Kane (who else?) missed a trick by not giving her a derringer to do it with. She just uses a boring ordinary pistol. 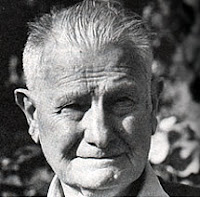 There’s a Winchester shoot-out in the rocks and you may guess who gets plugged (the Frogs, obviously, but who else). Sterling wins the hand of the gal and Hoagy gets the saloon, Napoleon now ruling. So that’s rewarding.

Oh well, it’s not bad. It’s tightly directed, and the supporting cast is good. You’ve got Elisha Cook Jr. and John Dierkes in small parts. The characters trundle those railroad hand-carts a lot. The nice music is by Victor Young. There’s a fair bit of Republic stock footage from other logging movies overdubbed with the current cast yelling, “Timber!”, as one might expect. Brian Garfield tells us that Republic’s stockholders sued Herb Yates because of the huge sums he had to pay Hayden to agree to star with Ralston. I don’t know if they won. 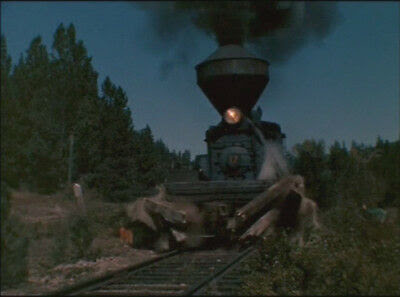 And in case you’re wondering, timber usually refers to felled trees, whereas the sawn wood products of the trees are referred to as lumber. So really they ought to be timberjacks rather than lumberjacks, I guess. Whatever.