What is a B-Western?

There has been some discussion on this blog at different times of the B-Western. Some readers who like a particular picture don’t appreciate, I think, having their beloved oater described as ‘B’. Perhaps they feel that the term is demeaning to what might be a cracking good film. Of course there have been some superb B-Westerns, and indeed some of my own top favorites in our noble genre might be described as such.

The thing is that different people have different definitions of what a B-Western is. In the early 1930s, with economic depression everywhere, studios and theaters were suffering badly. Pre-Wall Street Crash attendance figures of one hundred million tickets sold a week dropped in 1931 to less than half that. Picture houses tried showing shorter second features, which became known as B-movies, before the main film as part of a program, often including a newsreel, trailers and a cartoon (and advertising, of course) to improve ticket sales, and Westerns often fitted the bill. One-hour low-budget black & white affairs, often with a less than stellar cast, these ‘B-Westerns’ could be churned out quickly and cheaply and they cost the theater owners little to rent. It worked: by the mid-30s attendance was back up to around sixty million a week. Sometimes exhibitors didn’t even have a choice: to get access to a studio's attractive A-pictures, many theaters were obliged to rent the company's entire output for a season. 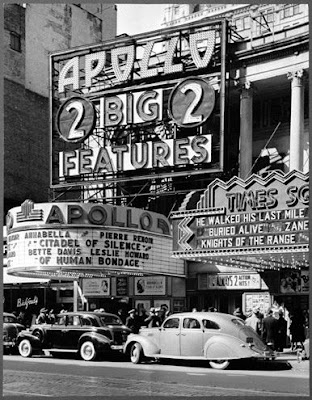 By the early 50s these second features were disappearing in favor of bigger A-pictures, in color, and sometimes, as the 50s progressed, with features such as Cinerama or CinemaSope to draw the paying customer in, especially as the movies faced major competition now from TV, so you could say that the period from the mid-30s to the late 40s was the heyday of the B-Western.

As Brian Garfield pointed out in his fine book Western Films, these pictures were formulaic to a degree. “The plots nearly always hinged on one of three devices: the clearing of the hero’s name, the rescue of the distressed damsel, or the avenging of a murdered father or brother.”

By the mid-30s four out of five theaters were showing second features, and studios had to accelerate production. Harry Cohn at Columbia insisted on a new Western every six days. ‘Poverty Row’ studios sprang up to meet the demand, often with grandiose names that belied their true stature such as Majestic, Grand National, World Wide or Invincible. All these pictures made the names and reputations of a whole host of B-Western stars and some of them, such as Tex Ritter, Gene Autry and Roy Rogers, among others, became household names and hugely popular, especially among juvenile audiences.

The real stars of these pictures, though, were the stuntmen who provided the acrobatic excitement. Sometimes they even got more money than named actors.

When with the advent of the talking picture, pianists and, in the posher palaces, orchestras were let go, B-movies of this kind still didn’t have musical soundtracks, and the flatness and dullness was exacerbated by the often extremely banal dialogue. Sound pushed costs up. It wasn’t until about 1933 that a background score became the industry standard and some of the Poverty Row studios went on without music right into the late 30s. The audiences didn’t seem to mind.

Some of these pictures even became a lucrative business. In 1935, B-movie production at Warner Bros. reached 50% of studio output. From 1935 over a hundred Hopalong Cassidy movies were made over at Paramount. They were ‘family-friendly’, patriotic, puritan and even sometimes downright sanctimonious. When former DeMille silent actor William Boyd took the role it led to a bonanza. Eventually Boyd hocked everything he had to buy back the rights to all his movies and then made a fortune selling them to TV in the early 50s. He was also one of the pioneers of merchandizing, producing every kind of Hopalong gadget imaginable to separate young fans from their pocket money (or empty their parents’ wallets). 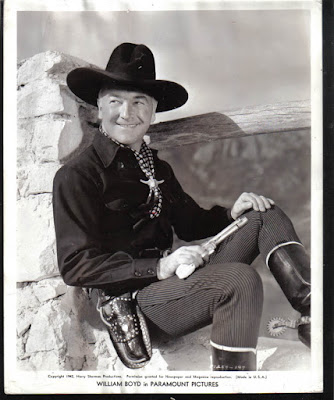 Hopalong was a good businessman
Even then the term was ambiguous. Take Fox: in 1939 Fox released, as all the studios did, a number of Westerns, and they generally sold pretty well. One of them was undoubtedly an A-picture. Jesse James starred Tyrone Power and Henry Fonda, and was a 106-minute Technicolor extravaganza which was promoted with much ballyhoo. Another, however, was Frontier Marshal, a lower-budget Wyatt Earp story starring Randolph Scott, a 71-minute black & white picture which received much less attention. In fact, though, despite the fact that Jesse James got all the attention in the press and the plaudits and so on, Frontier Marshal did incredibly well in modest mid-West theaters, and ended up making almost as much money for Fox as their ‘big’ picture. So was Frontier Marshal a B-Western? It comes down to a matter of opinion. 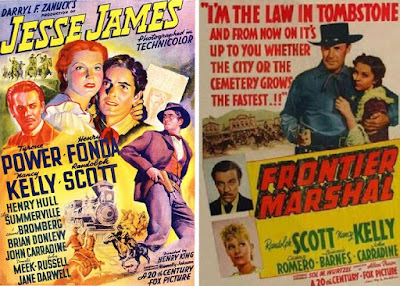 Some movies made on low budgets were marketed as A-pictures and some ‘sleepers’ took off and became hits. Whether films produced by the likes of RKO were ‘big Bs’ or ‘lesser As’ was often hard to say.

But in any case the days of the B-movie as second feature were numbered. In 1948, a Supreme Court ruling in a federal antitrust suit against the majors outlawed block booking and led to the Big Five letting go their theater chains. Production costs rose, the public tired of the formula, TV was too much of a draw, and one by one the ‘B’ studios closed or merged. The classic double feature vanished from many American theaters during the 1950s. Yet the movies those programs screened still have their fans today.

But the term B-movie did not die. It just modified its meaning. It came to signify, as the article on the subject on Wikipedia says, “a genre film with minimal artistic ambitions”. The mid-and late-1950s were the high water mark of the low-budget horror and sci-fi films and most people thought of these as B-movies, even if they weren’t second features. Perhaps it was here that the slightly negative connotations developed, though actually many B-movies by this definition were often rather good. It’s a bit like the ‘B-sides’ of the 45s we used to listen do back in the day. Sometimes they were better than the ‘A-side’ song the label was plugging.

The postwar drive-in movie boom expanded the B-movie industry. In January 1945 there were 96 drive-ins in the United States; a decade later there were more than 3,700. 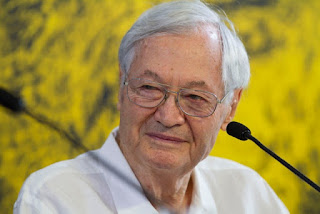 Often referred to as the King of the Bs, Roger Corman (left) said, "To my way of thinking, I never made a B-movie in my life". The traditional B-movie was dying out when he began making pictures. He prefers to describe his output as "low-budget exploitation films". Fair enough. Many might think of 60s spaghetti westerns as B-movies, with their ultra-low production values and derivative scripts and cheap settings. Other fads and exploitative series emerged, such as blaxploitation (including Westerns) and Kung Fu. In the 70s sex was added to violence in a whole slew of cheaply-made pictures screened in less than salubrious theaters. The B-movie is still alive and well, even if it is often called nowadays an ‘arthouse’ or ‘independent’ production.

As for this blog and the B-Western, I have decided not to use the term any more. It can upset some readers. We’ll just enjoy the movies without giving them a label.