Allan Dwan (below) was one of the most prolific movie directors of them all. He himself reckoned he had made over 1400 films, between 1911 and 1961. However, a relatively small proportion of these were talkie Westerns. Oaters had been a staple of the industry in the early days and so Dwan directed dozens of silent ones, but only 1% of his output was in post-1929 Westerns. Some were quite well known, such as the 1939 Frontier Marshal with Randolph Scott as Wyatt Earp, or The Restless Breed in 1957 with Scott Brady, but probably his most famous Western of all was Republic’s Woman They Almost Lynched, four years before that. 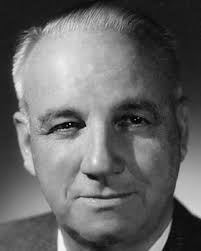 Partly this is because it was one of those role-reversal Westerns, a sort of precursor/prototype of Johnny Guitar in 1954. The scene in which Kate Quantrill, in pants and a gunbelt, says to the men, “Alright boys, stand back” so they don’t get hurt as she steps out into Main Street to walk down for her quick-draw showdown with Sally Maris is a classic mirror-image of the standard Western trope. 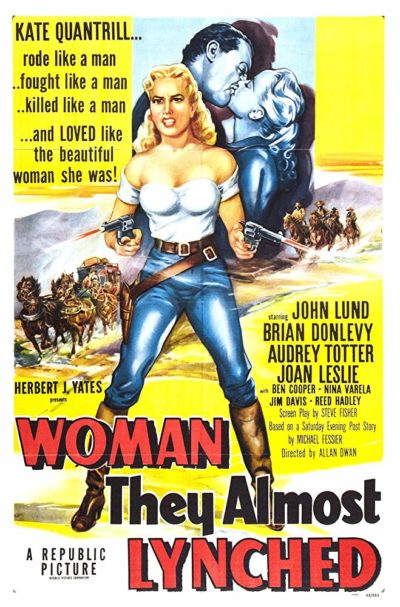 I see Audrey got on the poster, not Joan. Bad girls have all the fun.

There had been plenty of Westerns in which the ladies were key characters, even getting top billing, Dwan’s own Montana Belle (1952) with Jane Russell being a good example, or Russell again as bandida Mike ‘The Torch’ Delroy in Son of Paleface, and we think of Marlene Dietrich in Destry Rides Again or Rancho Notorious. You will certainly think of others. But Woman They Almost Lynched is a wholesale reversal. In Border City in 1865 a woman mayor rules the roost, with a council of other women (though they are yes-women really) and the men are reduced to mere pawns in the game. 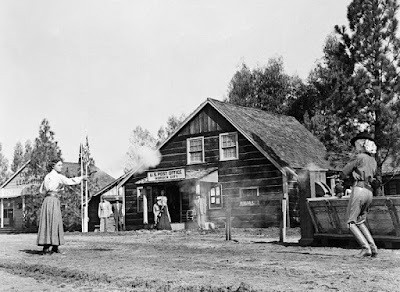 That didn’t stop Republic giving the rather insipid John Lund top billing, which was a bit naughty in a movie dominated by Joan Leslie as Sally, Audrey Totter as Kate and Nina Varela as Mayor Delilah Courtney. The lantern-jawed heavyweight Delilah looks as though she could have gone forty rounds with Bob Fitzsimmons or John L Sullivan (and not come out the loser). 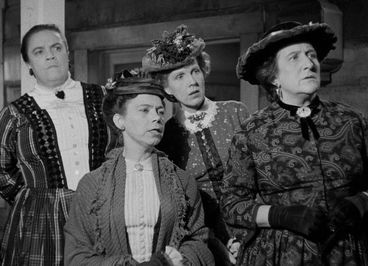 The town council observes, with Mayor Delilah on the left

Lund didn’t do Westerns much (wisely). Being blond and bland he was unsuited to the genre. You can see him in Budd Boetticher’s rodeo picture Bronco Buster, in The Battle at Apache Pass with Jeff Chandler, Five Guns West with the great Dorothy Malone, Chief Crazy Horse with Victor Mature, White Feather with Robert Wagner and Jeffrey Hunter, and Dakota Incident with Dale Robertson, but that wasn’t a huge number for stars in the 1950s. He topped the billing in four of them but you never quite know why. 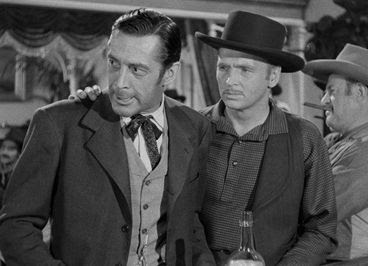 Lund with saloon keeper Reed Hadley, whom he is about to shoot

Other minor characters (i.e. men) who appear in Woman They Almost Lynched are portly Brian Donlevy as Quantrill (he had already been Quantrill, as you know, in Kansas Raiders in 1950), young Ben Cooper (you’ll remember him as Turkey Ralston in Johnny Guitar, so he would get used to Westerns like these) as Jesse James, tall Jim Davis as Cole Younger and Reed Hadley (a favorite of mine, himself Jesse in a movie to be reviewed soon) as the no-good saloon-keeping husband of Sally. James Brown (no, not that one) is Frank James and Rocky Shahan is Jim Younger, but they have very little to do. 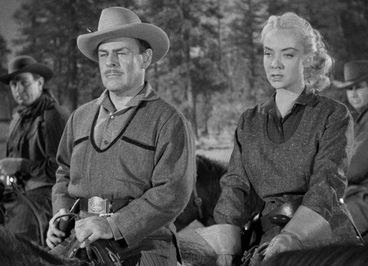 The idea is that the war is still raging (Republic stock footage proves that) and up in the Ozarks, on the Missouri/Arkansas border, the town of Border City has declared itself neutral. No man in uniform is allowed within five miles of it and anyone promoting the cause of either Union or Confederacy is lynched by the orders of Madam Mayor (as we witness in the first reel). The thing is, Border City has rich lead mines and both sides need that lead for bullets. 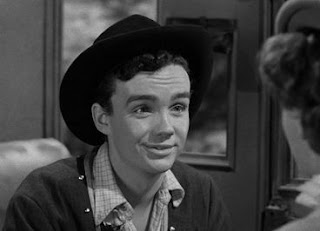 Jesse James is a sweet boy

We are told that the town’s neutrality made it a magnet for all the riff-raff of the West, which arrives on every stage. However, on the stage that we see there is neither riff nor raff, only the rather prim and genteel Miss Sally Maris (Leslie) come to stay with her brother (Hadley), who, she believes, runs a respectable hotel (actually, it’s a racy saloon, the Lead Dollar). On the way, though, Quantrill’s Raiders swoop down, exterminate the Union cavalry escort the stage had and themselves escort Miss Maris into Border City – Quantrill’s men wear no uniforms, you see, so they can. It is said that William Witney directed the attack on the stage part. 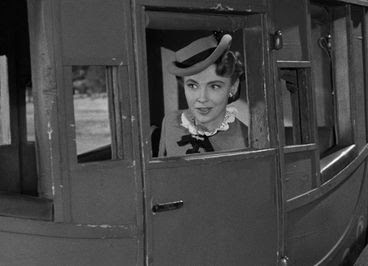 Neither riff nor raff

Leslie, despite only being billed fourth, is really the heroine and chief character. She had been signed first by MGM, then Warners, and she co-starred with Humphrey Bogart, Gary Cooper, James Cagney and others in some big pictures. She did seven Westerns, from 1948 to ’54, and is probably best remembered by us Westernistas for her part in André De Toth’s Man in the Saddle with Randolph Scott. She was a class act, I thought, and certainly showed up the less talented Audrey Totter, who overacts in her part throughout. 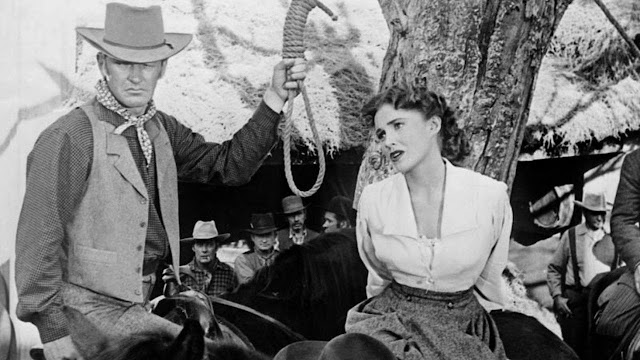 Almost, but not quite

La Totter plays Kate, the woman who loved saloon man Reed Hadley but was kidnapped by Quantrill and became the guerrilla leader's wife. She adopts men’s clothes, rides and shoots better than most of them and becomes a member of the marauding band. Totter was one of those blonde-bombshell types who made a name as ‘bad girl’ in noirs. She appeared in quite a few Western TV shows but only did five feature oaters, this being her first. You get the idea that Totter’s part was written for studio boss Herb Yates’s paramour Vera Ralston. I don’t know if that was so, but anyway Totter and Ralston were equally weak in such parts. In historical fact, during the war, Quantrill met thirteen-year old Sarah Katherine King at her parents' farm in Blue Springs, Missouri. They married and she lived in camp with Quantrill and his men. At the time of his death in June 1865, she was seventeen. 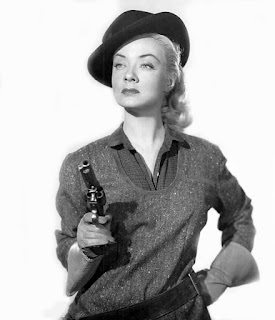 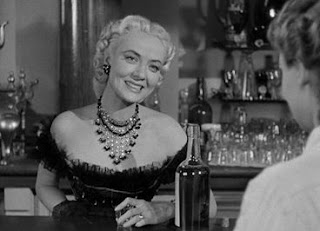 Audrey makes the most of her part

Kate loathes Sally and this will lead to the showdown gunfight I mentioned in paragraph 2 but they will eventually come to bond, and see they have more in common than they have that divides them. Sisters have to stick together, kind of thing.

You almost get the idea that Dwan was making a parody Western. Almost, but not quite. He does in fact take it seriously, and it just about works on that level. The scenario by Steve Fisher (seventeen Westerns, mostly 1960s AC Lyles geezer-Westerns but also Top Gun, San Antone and The Man from the Alamo) from a Saturday Evening Post story by Michael Fessier, is done without cynicism or belly-laughs, though of course there is an undercurrent of comedy throughout. Leslie said, “Audrey later told me she played the whole thing for farce, while I was doing it straight.”

No one is really nasty. Donlevy’s Quantrill is about the nearest to a baddy but even he is reasonably polite and acts to keep his men in check. Jesse James is a sweet boy, and he comes out with the usual baloney about his only being with Quantrill because dirty Union Jayhawkers hanged his daddy. Westerns loved this excuse and often trotted the falsehood out. Cole Younger is a bit of a heavy, and has designs on the fair Sally (after all, his boss kidnapped and married a dame so why shouldn’t he?) But really, everyone is more or less decent. There are some saloon gals (naturally the word whore is never pronounced) but they are a band of righteous sisters too, and stand by their woman (Sally) when the going gets tough.

Audrey has two execrable songs in the saloon. You may have to turn the sound down for those. They are dubbed, of course.

There are very few location shots, most being done on soundstages as interiors, so it’s quite a talky Western. There’s a catfight (Sally vs. Kate) in the saloon, which, along with the presence of Donlevy, definitely reminds us of Destry. There are a few good stunts in the first reel (one fellow stepping on the backs of three horses to get to his man in a fight) but there are too many horrific horse falls, as was common then. 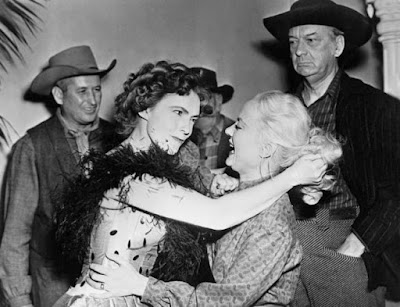 It was shot by Reggie Lanning, B-Western maestro and Republic stalwart, who had started on Three Mesquiteers Bs back in the day and graduated to a whole series of Roy Rogers, Gene Autry and Bill Elliott Westerns, among others. It was designed to be in Republic’s Trucolor but in the event was shot in black & white. There's a good Olive Films print on YouTube.

I spotted Frank Ferguson as the barman in a one-liner bit-part. So that was good.

It gets a bit soppy towards the end (Lund loves Leslie) and the whole film is probably just a tad too long at 90 minutes. But all in all it’s entertaining. In the last scene Lund announces that the war ended yesterday. “Who won?” asks the mayor. Doh. Then they all lived happily ever after.

It’s fun, even if it’s no great classic.