The women are taken to the state pen

Jeff Morrow was Major Bart McClelland in Union Pacific on TV and he was Cochise in an episode of Bonanza but he only did five Western features. He had a smallish part in Siege at Red River in 1954, a bigger one in the Dean Martin/Jerry Lewis ‘comedy’ Western Pardners two years later, he was Jim Bowie in The First Texan, also in ’56, he led the cast in Charles Marquis Warren’s Copper Sky in ’57, which we reviewed the other day as part of our recent Marquis-Warren-orama, and finally he starred (if that’s the word) in Five Bold Women, an independent production of 1960. 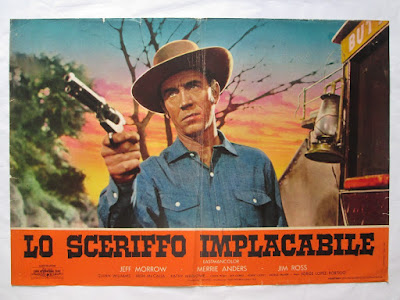 Jeff does his tough-guy act

It was “A Jim Ross production” as the credits tell us. This was James Ross’s only movie (he’s not the James Ross working in TV now) and he played the bad guy Missouri Kid in it too. The picture was directed by Jorge López Portillo, a Mexican assistant director whose only film as director this was, and written by Mortimer Braus (his only Western movie) and Jack Pollexfen, whose story was used for The Secret of Convict Lake but otherwise nada. So it all seems to have been a pretty amateurish effort.

Still, it isn’t bad, and verges on the interesting here and there in its subject matter. The story, set in Texas in 1881, concerns five women convicted (by all-male juries, of course) of crimes and being sent to the penitentiary. The writing struggles to define and differentiate the women at first but we eventually grasp that the boss prisoner is Big Pearl (Irish McCalla, Sheena, Queen of the Jungle), in for armed robbery and murder, and her pal is 'Faro' Kitty Brewster (Kathy Marlowe), guilty of a “love killing” (whatever that may be). But the other three are Maria Garcia (Lucita Blain), who killed her employer, a rich rancher who tried to rape her; Hanna Gates (Dee Carroll), who went mad and strangled her own baby before trying to commit suicide (she had seen her parents killed by Indians when she was young and it had deranged her); and Ellen Downs (Merry Anders, the leading Dalton Girl in 1957), who was wrongly convicted when her man, the louche Missouri Kid (Ross) didn’t bother to show up to alibi her. The idea of frontier women going mad was wonderfully well treated in Glendon Swarthout’s novel The Homesman, and the 2014 movie of it with Tommy Lee Jones and Hilary Swank was also very fine. But Five Bold Women came over half a century before that. 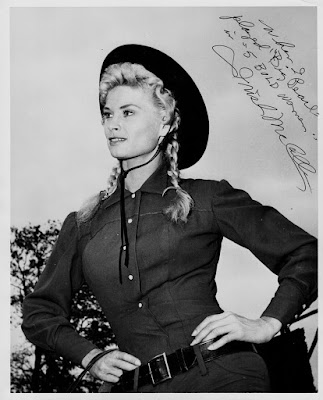 What they used to call a pin-up. Sheena out West.

You get the idea at first that the women are ‘bold’ in the old-fashioned sense of pushy, forward or improper but we will discover that they are bold in the sense of courageous and daring too.

For they are handed over to the local lawman, Marshal Kirk Reed (Morrow) who has the job of taking them by stage to the pen in Del Rio. The stage driver is Guinn ‘Big Boy’ Williams in one of his last Westerns – there would only be his parts in John Wayne’s The Alamo and The Comancheros to come before he reached the end of a mighty long Western trail that began as Man Shooting Pool with Bert (uncredited) in a Will Rogers silent of 1919, 87 feature Westerns and 49 TV Westerns previous. He was always a ‘character’, as he is here, the humorous and feisty Big Foot in buckskins, with a rifle scabbard strapped to his belt. 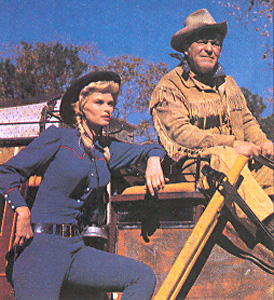 On the stage there is also the marshal’s deputy, young Tom Ames (George Kramer), for one of the women to fall for - another going for the marshal, but no one, sadly, pining for Big Foot - and a Mr. Forrest (uncredited actor) who is rather superfluous to the plot. The trouble is, to get to Del Rio they have to pass through dangerous Comanche territory. Now, as the Comanche had been virtually annihilated by the white man’s diseases and his military punitive expeditions by the early 1870s, and the last free band of Comanches, led by Quanah Parker, surrendered and moved to the Fort Sill reservation in Oklahoma in 1875, it’s a little difficult to explain why they were such a threat to stagecoaches in 1881, but hey, we’re not watching this for a history lesson, right?

Naturally, the Comanche are just nameless non-characters there to be dangerous and brutal, not actual real people. I’m afraid this is an old-school Hollywood Western in that regard.

There are occasional rather daring shots of the ladies’ legs (you know, daring for 1960) and of course the stage stops long enough for them to bathe in a creek.

The Missouri Kid inveigles himself into the party and manages to make the stage lose a wheel mid-river, then he does a bunk with his (rather unwilling) belle Ellen, but he is pursued and shot by the brave marshal, who leaves him for dead and returns to the caravan with Ellen (having time for a smooch with her). But Missouri is not dead (well, he was the producer after all) and he will return for the dénouement.

They arrive at a stage way-station that has been attacked by the Comanche, the owner tortured and his wife raped (discreetly suggested, not shown). Little bits of backstory come out. Hanna flees the horror but is later found staked out. The Comanche have used her brutally and so her worst fears have been realized. She will be buried by her cellmates in an almost touching funeral, as they pray and sing but can’t remember all the words. 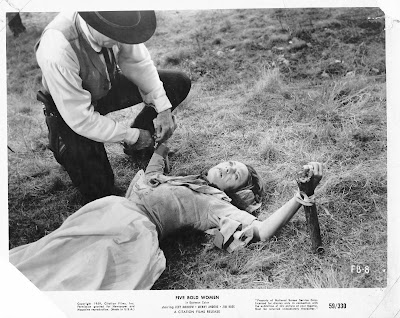 But then there is mutiny, and the boldest of the five bold women, Pearl, takes over. She is pretty handy with a gun too. She ties the white men up (all except Missouri) and herself drives the stage away. But of course the Comanches attack it. Luckily the US Cavalry arrive at the last moment – it’s rather a trad Western in that respect too. 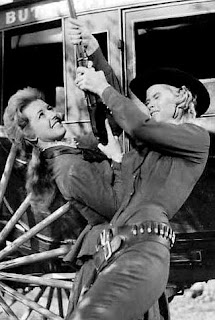 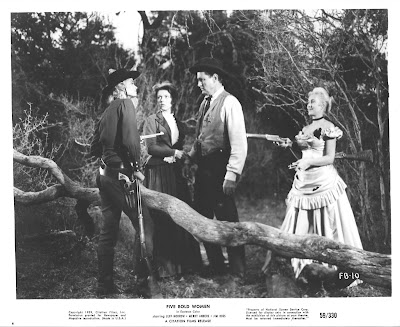 The gals get the drop on the hombres

In the end, of the five women, the two real criminals will serve their time in the pen, one will die in noble self-sacrifice, one will be promised a pardon, and poor Hanna will lie a-moldering in her prairie grave. Oops, I may have given away the ending.

It’s OK. You could watch it. The modern print has turned the Eastmancolor to pretty well sepia but that gives it a rather charming oldie look.

It’s just good to have a Western with women center-stage, even if it is the men who are in charge. This has very faint echoes of Westward the Women, nine years before, though it has nothing of the quality of that fine picture.

Big Boy was the best.