In the early 1960s the mainstream theater Western seemed doomed. The Magnificent Seven (1960) seemed now to be the last hurrah of the previous decade rather than the harbinger of the next. Audiences were falling away, staying at home to watch Gunsmoke on TV. Yes, the studios battled on, and some Western stars managed to continue quite well – especially John Wayne, of course, who was still packing them in with big bankable oaters like McLintock! (1963), The Sons of Katie Elder (1965), The War Wagon (1967), and so on, and also Audie Murphy, who did one or two a year for Universal all through the first part of the decade, such as Seven Ways from Sundown (1960), Posse from Hell (1961), Showdown (1963) and others. But the writing was on the wall. 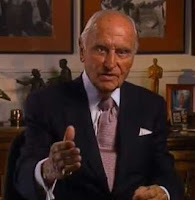 In 1963 veteran producer AC Lyles (left) approached Paramount with a view to doing some oaters along the lines of Audie’s, each to be shot in only 10 – 14 days and with a budget capped at $300,000. He and the studio execs felt there was commercial life in the old dog yet. And so we got a whole series of what have become known as “geezer Westerns”, that is retro oaters which wheeled out some of the Western stars of the 50s, now broadening in the beam and graying at the temples but still fondly remembered by many a theater-going fan of the previous decade. We’ve already reviewed quite a few of these, Young Fury, Town Tamer, Waco, Hostile Guns and Arizona Bushwhackers. Doubtless we will get round to the others eventually. Three of them starred Rory Calhoun, and today’s, Black Spurs, was one of those. 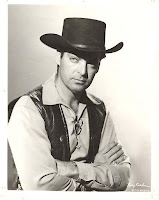 Calhoun (right) was on the downward part of the Western trail by this time. He had done his last ‘straight’ Columbia and Universal Westerns in the late 50s. Now in his mid-forties, white was appearing in his formerly lustrous black locks, and he was chubbier in the chops, and he knew as well as anyone that the glory days of the big-screen 50s Western were fading faster than his hair color. He had moved to TV to do The Texan in 1958 (which we’ll be looking at next month) but you get the idea he was glad of the chance to get back in the saddle for another few feature oaters when Lyles suggested it. He was always good in the genre, though I kinda wish he had quit while he was still ahead and not done those cameos in weak late pictures such as Mission to Glory (1977) or Bad Jim (1990).

With him, though, was a veritable A-list of Western character actors from the good old days. Second billing went to Linda Darnell, though she has a fairly incidental part as Sadie, the saloon madam. This was her first film since 1957 and her first Western since Dakota Incident in 1956. She had pretty well retired. But in ‘65 many viewers would have remembered her (faintly ridiculous) Chihuahua in John Ford’s My Darling Clementine in 1946 or the (unconvincing) Indian maiden who loves Joel McCrea’s Buffalo Bill two years before that. It was Darnell’s last film: she died April 10, 1965, one month before the movie was released, after being severely burned in a house fire. 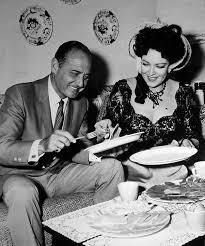 Terry Moore was listed third, as Anna, Rory’s beloved who ups and marries another (James Best). She received an Academy Award nomination in 1953 for her performance in Paramount's Come Back, Little Sheba (but that was not a Western so we scorn it). In the 1970s she was in the news more than she was in films, as she asserted that she was the secret wife of the late billionaire Howard Hughes. Westernwise, she only did five, Cast a Long Shadow with Audie (and Best again), this one, two other geezer Westerns (Town Tamer and Waco), and a bit part in the 2000 cowboy-horror Stageghost. She’s OK, I guess, though her hairdo is very 1960s. 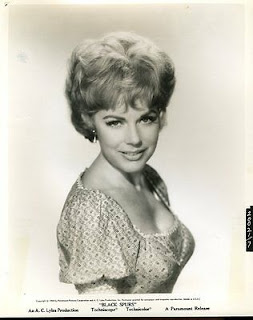 Next came Scott Brady, Lon Chaney Jr. and Richard Arlen, all of whom will certainly be well known to any passing Westernista. Brady was one of the tearaway Tierney brothers and in our noble genre was probably most famous as the Dancin’ Kid in Johnny Guitar and as Shotgun Slade on TV, but of course he’d done many other big-screen oaters, from 1949 on, topping the bill from 1954 in epics such as Mohawk and Ambush at Cimarron Pass. He did four of these 60s geezer pictures for AC Lyles. Chaney was another the audiences would have readily recognized, having if not graced Westerns then at least appeared in them for years. Though most famous for horror flicks, like his dad, he had been memorable as the arthritic ex-marshal in High Noon, and you’ll probably remember him too in Union Pacific, Badlands of Dakota, Jesse James, The Indian Fighter and many more (he had 42 cinematic notches on his gun). Arlen, you know I’m sure, got his big break when William A Wellman cast him as a pilot in the silent movie Wings in 1927 but from our point of view much more important was his part as Steve in the Gary Cooper version of The Virginian (the best ever version). He appeared in 34 Western features, from the silent Under the Tonto Rim in 1928 to Warlock in 1959, and was in nearly all Lyles’s 60s pictures.

That was a long paragraph. Sorry. Here's a short one to make up for it. 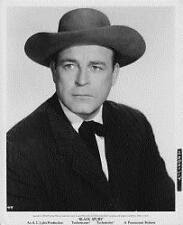 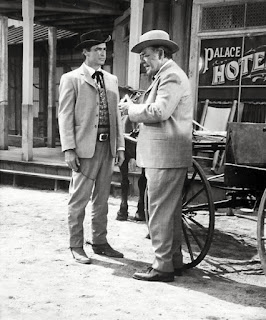 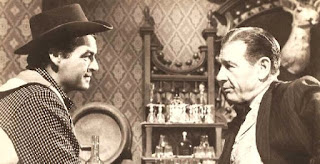 Arlen
So the cast was shaping up pretty well. But it didn’t end there. With Bruce Cabot as saloon heavy, James Best as the marshal and DeForest Kelley as a corrupt sheriff, there are many other names and faces you will recognize.

In a way, though, that’s all these pictures had going for them. Webster’s defines facsimile as “an exact copy”, and I think these geezer oaters were facsimiles of 50s Westerns. Unlike the trashy spaghettis of the same decade, at least Lyles’s films were exact copies, and I suppose that’s good, but they somehow just don’t gel as the real thing. The low budgets, the aging stars, the rather lurid writing (this one, like many of them, was written by Steve Fisher), all combined to undermine them. EVERY TIME HE COMES TO TOWN – SOMEONE’S GONNA DIE! screamed the posters, though it’s not true at all in the story. 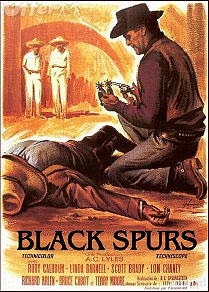 He takes the spurs. They don't look very black though.

It was directed by old stalwart RG Springsteen, who helmed six of these for Lyles. RG went right back too, having worked on Westerns from 1936 onwards and directed them since the alliterative Wagon Wheels Westward, a Bill Elliott oater, in 1945. He churned out B-Westerns at quite a rate (in 1946, for example, four Bill Elliott pictures, three with Allan Lane and three with Monte Hale). You may remember him from King of the Wild Stallions with George Montgomery or Showdown and Bullet for a Badman with Audie Murphy. He does the job on Black Spurs. 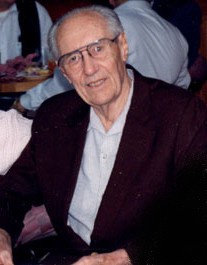 It’s the well-worn gunfighter-finds-redemption plot with Rory as Santee (as Glenn Ford would be eight years later), a man who wants to get on in the world and is tired of working for someone else on a ranch. When the black-spurred bandit El Pescadore (Robert Carricart) robs the local bank and kills a teller, Santee tracks him down, beats him to the draw, shooting him dead and appropriating the spurs, and earns the $3000 reward. The trouble is, it took ten months to do this and his girl Anna (Moore), who anyway doesn’t approve of chasing down criminals for rewards, wouldn’t wait. She went off and married the marshal of the Kansas town of Lark, Elkins (Best). Heartbroken, Santee becomes a famed and feared full-time bounty hunter with trademark black spurs, all cynical and hard. 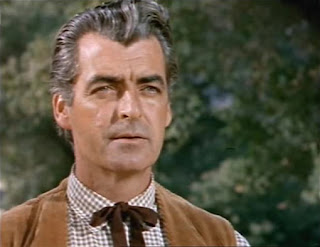 He fetches up at Kile, KS, owned and run by rich man Gus Kile (Chaney). He proposes a scheme to Kile. The railroad is scheduled to go through Lark, but railroads tend to avoid “hell towns” and if Lark becomes rowdy enough, the company will re-route it through Kile. For $25,000 and ten thousand acres of land, Santee has a plan for busting Lark wide open. Now this all seems highly improbable. Railroads had no qualms whatever about running their track through anywhere, as long as there was money in it. I’m not sure where the writer got the idea that liquor, girls and gambling in Lark would deter the railway. But anyway, that’s the plot, so Santee contacts his friend, saloon madam Sadie (Darnell) and gets her to come to Lark, along with her girls, the bouncer Henderson (Cabot) and slicker-dude Swifty (Joseph Hooker) to manage the gambling. Meanwhile, Santee himself persuades saloon owner Pete Muchin (Arlen) that he needs a partner. 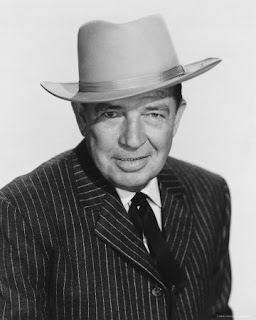 Cabot is the saloon tough

Naturally, all this does not appeal to the good citizens of Lark, used to more sobriety in their burg and desiring the railroad, and the marshal and his wife lead the disapproving townsfolk. They are ably assisted by their burly preacher, the Reverend Mr. Tanner (Brady) who greets Santee by fighting him in the street in a brutal brawl. Santee wins, but only just, and the two come to a gruging mutual respect.

In town, various people fear Santee. They think he has come to bounty-hunt them. One, the blacksmith (Read Morgan) even goes so far as to pay an assassin to eliminate Santee. Naturally Santee is too good for the killer. Here we have a 1959 No Name on the Bullet vibe going, as the townsmen quail before the lightning-fast gunman. Maybe that’s where Steve Fisher got the idea. Director Jack Arnold and Audie did it better, though.

Henderson bribes a trail boss to let his cowhands hurrah the town of Lark and a high time is had by all in the Palace Hotel. When the poor marshal, outgunned, rides for help to Wichita, Henderson’s men waylay him and tar and feather him. He only just survives. 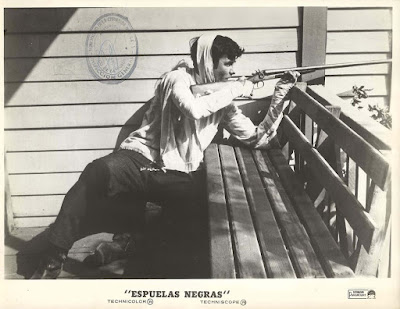 Tarred and feathered he may have been, but there's still fight left in him. May the Best man win.

This is the moment when the worm (or the gunfighter anyway) turns because it’s too much for Santee. Anna, Mrs. Elkins, has told him that her young son is in fact Santee’s (they daringly had sex before marriage, you see). The gunman begins to see the light. He tries to pay his louche partners off. But they won’t have any of it. The racket they have going is too profitable. The preacher endlessly tolls the church bell to summon the good people of Lark to action, and the thugs break his arm so he has to stop (a bit understandably, actually; it was getting on our nerves). Now Santee sees red. He borrows the ailing marshal’s badge and says, “I gotta town to clean up.” The showdown looms. 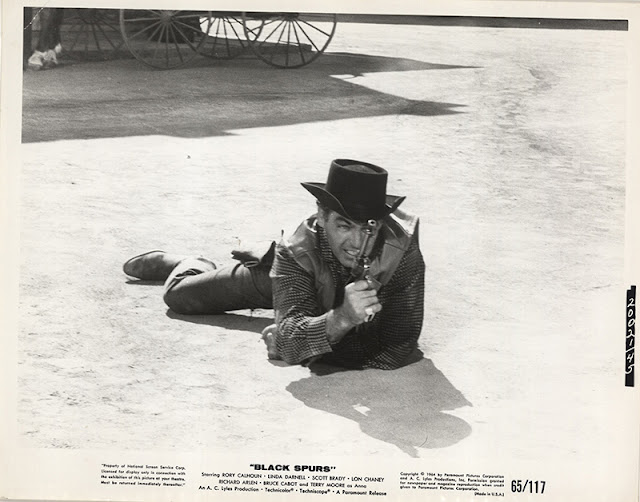 Well, well, all pretty unremarkable stuff. I will say that it’s done with gusto by the cast. They were clearly enjoying themselves and pleased that happy times were here again. It’s a bit creaky, yes, but definitely worth a watch for old times’ sake. Reviews at the time were modest. Variety called it “a well-made oater,” but The New York Times disparaged it as “a standard little western”.

It’s in Technicolor and Techniscope, shot by Ralph Woolsey, but the modern print is very muddy (on my DVD anyway).