The early days of Smith and Jones

When I was reviewing the excellent Randolph Scott Western Hangman’s Knot the other day (click the link to read that) I said that it was the only movie writer/producer Roy Huggins ever directed. And that was true, as far as big-screen feature films went, but reader Walter S pointed out correctly that Huggins also directed a TV movie, an early trial run for his future series Alias Smith and Jones in the 1970s, called The Young Country, first broadcast on March 17th 1970 in the ABC Movie of the Week slot. It is that Western that I’ll say something about now. 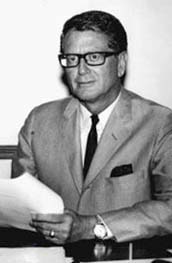 The Young Country was made at Universal Television (the first they did for ABC) and they landed Walter Brennan as the headlining Western star. Brennan had been appearing in Westerns since the silent days - he had been ‘Racing Spectator in Grandstand at Rodeo (uncredited)’ in a 1925 Hoot Gibson oater, The Calgary Stampede. And his career would last a full fifty years – his last Western was Smoke in the Wind in 1975, directed by his son Andy. Born in 1894, he habitually played the old-timer, even when young (rather like Gabby Hayes and Arthur Hunnicutt) and perhaps his most famous roles were as John Wayne’s sidekick Groot in Red River and, again with Duke, as the cranky old deputy Stumpy in Rio Bravo. By 1970, though, he was genuinely old, though paradoxically he plays it ‘young’ in The Young Country. He was always good value, and had quite a talent for comedy.

Walter was always old, even when he was young 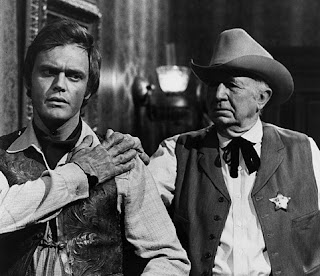 Here he tries to be young

The movie went for a semi-comic vibe, much influenced by the success of Butch Cassidy and the Sundance Kid (not a Western I care for) in theaters the year before. You put two handsome young charming-rogues together with a flip script, and hope for electricity. Comedy Westerns can work well but are notoriously hard to do.

The lead charming-rogue part, Stephen Foster Moody, went to Roger Davis. Best known as a voiceover, he made over 6,000 commercials on TV and radio. He’d been in a few TV shows, including the short-lived Western series Redigo in 1963, which was canceled mid-season. Later, as we shall see, he came to play a key part in Alias Smith and Jones. Moody is a gambler and almost a con-man, certainly on the lookout for the main chance. He says that he "took an oath to avoid hard liquor and hard work.” By luck he comes across a dead man who has saddlebags full of cash, $38,000. 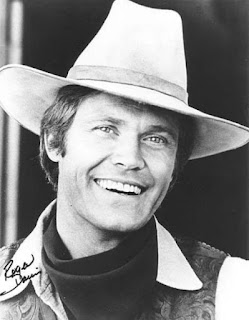 His foil, the other young scoundrel, is Honest John Smith (or at least that’s what he calls himself) played by Pete Duel, who would start off as Hannibal Heyes in Alias Smith and Jones (though a depressive who sought solace in alcohol, he would succumb to what is generally thought to be a self-inflicted gunshot wound in 1971, and Roger Davis would take over the role). Duel was born Peter Ellstrom Deuel. He said, “People were always saying, ‘Peter who?’ Or ‘Peter O’Toole’? I first took the ‘e’ out of Deuel, and then said to myself, ‘Why not take the 'r' out of Peter and make that a four-letter word, too, to balance the other?”  He was named the "Most Promising Male Star" of 1966. He had appeared in a couple of episodes of The Virginian on TV and later in 1970 he would also appear in a Mirisch Western with George Peppard, Cannon for Cordoba, but like Davis, he was hardly a Western specialist. He handles the role in The Young Country quite well. 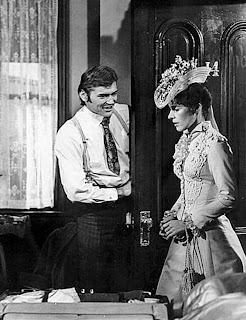 Both he and Davis look very 1970s in hairstyle and clothes but you can’t hold that against them: all Westerns looked more like the decade they were made in than the period they were supposed to be set in (in this case, 1870s Colorado).

Moody goes unarmed, preferring the trick of pretending he has a derringer hidden in the hat he is carrying (an old one, that, but they all seem to fall for it).

There’s a gal, natch, Clementine, played here by Joan Hackett (a role taken by Sally Field in the series), and she is an old flame of Honest John’s and not quite as crooked as he is, though almost.

Honest John pulls the wool over Sheriff Brennan’s eyes by claiming to be a deputy (of course his credentials are fake) and disappearing with the loot. Moody persuades the hoodwinked sheriff to let him out of jail to give chase. It’s all highly improbable and reasonably amusing, in a light-hearted way, though no great shakes. 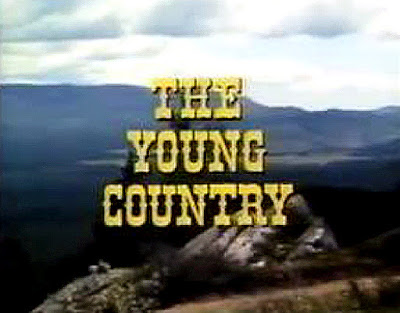 There’s a train. These days not even big-budget features can afford a Western train (even a railroad Western like the 3:10 to Yuma remake had to fudge it). But in those halcyon days a humble TV movie could manage one.

Robert Driscoll is quite enjoyable as Harvey "Fat" Chance, owner of the Fat Chance saloon, an amusing notion, and Richard Van Fleet has a running, rather slapstick gag as a drunk with a tendency to ram hitching posts with his head.

The music is a bit of a pain.

It’s all harmless enough, if a bit anodyne. But then so was the future series. I was never a great fan of it. It was Butch and Sundance without the magic. Though they did have some good episodes and great guest stars. I especially liked the ones with Burl Ives as Big Mac McCreedy. Even Katy Jurado was in one, The McCreedy Feud in 1972.

Do not, prithee, watch this movie hoping for a Western of the quality of Huggins’s Hangman’s Knot. But it could while away a reasonably entertaining 74 minutes.