While the early 1970s were the time of revisionist and often gory Westerns, when former heroes were being debunked and shown as the bad guys (the US Cavalry in Soldier Blue, Wyatt Earp in Doc and Billy the Kid in Dirty Little Billy) the big studios were still trying, against all the odds and in a declining market, to produce ‘mainstream’ Western movies for the theaters. And, in the case of those big commercial John Wayne oaters such as Chisum, Big Jake or The Train Robbers, they were succeeding too, on a box-office level. But in all honesty, some of the ‘straight’ Westerns of the early 70s were pretty stodgy. One More Train to Rob is not The Train Robbers, and a very far cry from some of those classy Universal oaters of the 50s and 60s. Bring back Audie, all is forgiven. 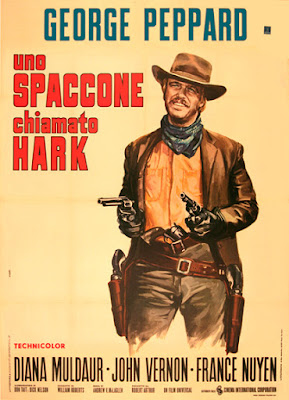 It was an AV McLaglen picture. Now, with the best will in the world (and you know I have that, hem hem) Mr. McLagen could not be accounted among the top directors of Western movies. He was OK on TV shows – 96 episodes of Gunsmoke to his credit and 116 of Have Gun – Will Travel, so respect there, but as for features, they were lackluster at best. They started in 1956 with Gun the Man Down, a James Arness vehicle, pretty well a spin-off from Gunsmoke and with all the look of a TV movie, and he worked with his pal John Wayne and with James Stewart, but on some of their very worst Westerns, such as the unfunny McLintock! with Wayne and the perfectly dreadful The Rare Breed with Stewart. Westerns with other stars, such as The Way West with Kirk Douglas, Robert Mitchum and Richard Widmark, were disappointing, even flops. Bandolero! with Stewart again and Dean Martin, was weak, Something Big with Brian Keith was something of a big yawn. Really, McLaglen Westerns were on the whole pretty second-rate. 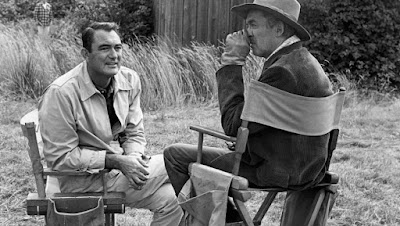 McLaglen with Stewart on the set of Shenandoah (I think, judging by the hat)

This one, One More Train to Rob, starred George Peppard. Surprisingly perhaps for an actor who made a career of action roles, Peppard only did five Westerns. We’ve reviewed the others, How the West Was Won, Rough Night in Jericho, Cannon for Cordoba, and the TV movie The Bravos, so click the links if you want to read about those. In this one he is Harker Fleet, professional train robber. The movie goes for comedy (but comedy Westerns are notoriously difficult to get right, and McLagen didn’t) and Peppard’s style did lend itself somewhat to comedy, with all those flip comments and so on. The A-Team was nothing but action-comedy, really. 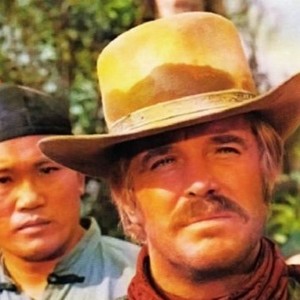 The rest of the cast was hardly stellar. John Vernon plays the bad guy, Timothy Xavier Nolan, with a heavy ‘Irish’ accent. You know Vernon, from Dirty Harry and Point Blank. In Westerns he was the evil Fletcher in The Outlaw Josey Wales, and Hacker in Tell Them Willie Boy is Here, and he made appearances in a number of Western TV shows. He’s OK, I reckon, in One More Train, in a charming-rogue role that a few years before would have been tailor-made for Robert Preston. 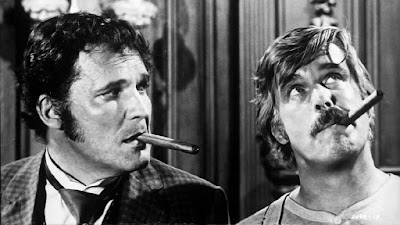 The leading lady was Diana Muldaur. Who? Well, apparently, Ms. Muldaur was the president of the Academy of Television Arts and Sciences (the outfit handing out the Emmy awards) in the 1980s. This was her only big-screen Western. She tries, I think, for a Maureen O’Hara approach. You will be the judge of whether she succeeds. 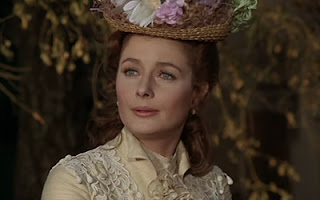 Otherwise, we have Robert Donner and John Doucette as sheriffs, so that’s something. Our old friend Marie Windsor is there. Stuntman-director-writer Hal Needham (Smokey and the Bandit) has a role and, though he is sadly very soon written out (we are told he spent his share of the loot on a ranch in Wyoming), Harry Carey Jr. is one of the train robbers. It was the last film of Lane Chandler (as ‘Party guest, uncredited’). All in all, though, these names aside, the cast is a bit ho-hum.

It’s one of those plots where everyone is constantly double-crossing everyone else and indeed it’s quite hard to keep up at times. There are double, treble and quadruple crosses.

Hidalgo Wells, New Mexico. 1870s-ish, I guess. We are told at the start that the train Peppard is about to rob is due at 3:10 (in-joke for Westernistas) and he leaves the arms of Katy (Muldaur) to hold it up. There’s an amusing little boy on the train who is delighted when it’s robbed. “Hot diggedy, it’s a hold-up!” though he is very disappointed when the robbers don’t shoot anyone. When Fleet (Peppard constantly chewing his trade-mark cigar) gets back to Katy, to re-establish his alibi, they are interrupted by the Jones brothers (actual brothers Merlin and Phil Olsen) who ‘invite’ Fleet to a shotgun wedding to their pregnant sis Cora Mae (Pamela McMyler). Because Fleet resists, rather forcefully, he ends up not only married but also doing a three-year stretch for assault. While he is ‘away’, Nolan marries his girl Katy and makes himself the richest man around with the train loot.

Three years later. Fleet has just been released (early for good behavior) when he sees a Chinese mine where the elder, Mr. Chang (Richard Loo) is just loading up gold in a wagon, escorted by local deputies. But before he can rob it, other bandidos beat him to it, and the deputies are in cahoots. The robbers have been tricked, though, for there are only rocks in the strongboxes. They abduct Mr. Chang, to get him to talk. Of course it soon turns out that these highwaymen are employees of Timothy Nolan. 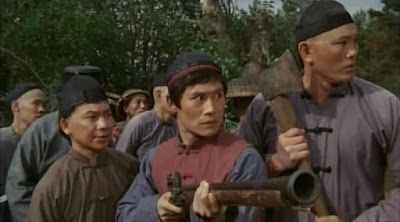 Fleet rescues Chang and does a deal with him (but double-crosses are the order of the day, remember) and highly complex plot developments ensue, which you may or may not have the patience to follow closely, and it all climaxes in a big shoot-out in the rail yard augmented by explosions from Chinese fireworks/grenades.

Spoiler alert (though not really as you see it coming in the first reel): Nolan dies and Fleet gets his girl back.

Well, doubtless some of the audience found all this hilarious and/or exciting. I just found it all rather bland. It's not bad exactly. I suppose if you wanted to be generous you could say it’s harmless fun. 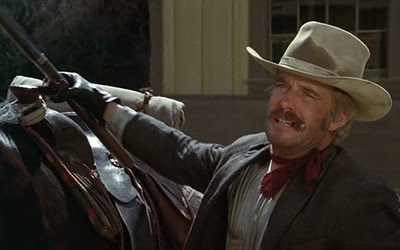