Mission to Glory is not my kind of film, being too close to Catholic propaganda for my taste, though of course any movie subtitled A True Story is likely to be largely fictional. Various men with SJ after their names are credited as technical or historical advisers. It tells the story of a Jesuit missionary in seventeenth-century Mexico and Arizona. He was so saintly and did such good works (according to the motion picture) that I wonder that he hasn’t been canonized or beatified. I must get on to the Pope about it. And although IMDb categorizes the picture for genre as a Western, it is only that by a great stretch of the imagination. As with Bad Jim, about which I was waffling the other day (click the link for that) I only watched it because of its cast. I was seduced by the line-up. And if I tell you that it features Richard Egan, John Russell, Rory Calhoun, Victor Jory, Henry Brandon, Anthony Caruso, Stephen McNally, Tristram Coffin, John Ireland, Ricardo Montalban, Cesar Romero and Michael Ansara, you will doubtless agree with me that this was a veritable Gotha of 1950s Western actors. I mean, you can’t not watch a movie with that cast, can you? 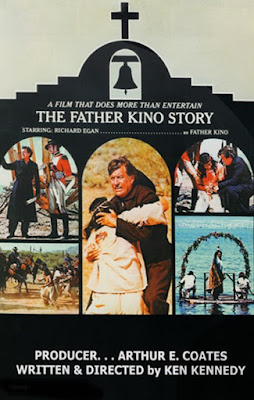 First of all, who was Padre Kino?

Well, Eusebio Francisco Kino, born 1645, was a Jesuit missionary, geographer, explorer, cartographer and astronomer who came from the territory of the Bishopric of Trent, then part of the Holy Roman Empire. For the last 24 years of his life he worked in the region then known as the Pimería Alta, modern-day Sonora in Mexico and southern Arizona. He explored the area and worked with the indigenous Native American population, including primarily the Pima. He proved that the Baja California Peninsula is not an island by leading an overland expedition there in 1699. By the time of his death from fever in 1711, he had established 24 missions and visitas (country chapels or visiting stations). 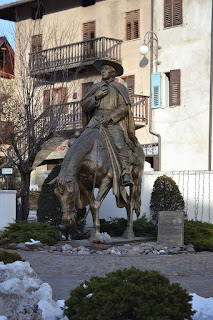 Equestrian statue of the padre in his birthplace

He is played by Richard Egan, then in his mid-50s and showing it a bit (but hey, who am I to talk?) You will recall Mr. Egan, no doubt, the boss Reno brother in Love Me Tender, second-billed in These Thousand Hills, led in Tension at Table Rock (to be reviewed early next month) and star of the TV show Empire. Here he is the resourceful, courageous and downright saintly priest fighting for right, championing the oppressed and being generally a good egg. 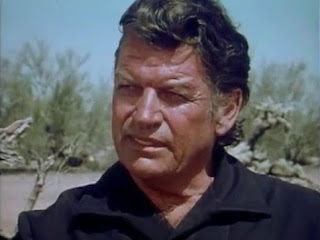 Egan, a far cry from being a train robber Reno boy

John Ireland (he shot Jesse James, in a movie also soon to be reviewed) is a rather more Machiavellian kind of priest, ready to countenance brutal mistreatment of the Indians in the mines because the mine-owners give silver to the church. Other clerics are Anthony Caruso (a regular on Alan Ladd Westerns), Victor Jory (he was also a priest in The Capture, remember), Tristram Coffin (oh, what a splendid name, 60 feature Westerns from 1939 to this one, his last), Henry Brandon (Scar in The Searchers) and Stephen McNally (James Stewart’s evil brother Dutch Henry Brown in Winchester ’73). A motley bunch of clergy, n’est-ce pas? 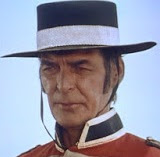 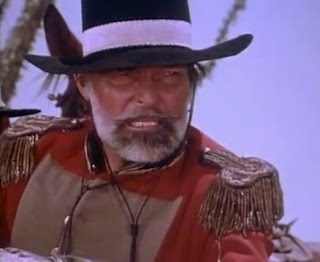 Rory, Ricardo and Cesar are dashing uniformed officers (rather decent types) and John Russell is a soldier too but a very cruel and stupid one. John looks splendid in his beard, easily the rival of Pernell Roberts’s, until he takes his hat off and the grizzled chops do contrast rather startlingly with the sleek black hair. Among the Indians we have Michael Ansara as a chief (obviously). It’s a lot of fun actor-spotting and you have to give credit to the casting director – or anyway you would give credit if the person were credited. Some of the Indians revolt against this Christianity business, considering it alien to their culture. They also do not care for the way their fellow Indians are exploited and made to provide virtual slave labor, and they certainly don’t like the way Capt. Solis (Russell) massacres them without bothering to wonder who is a good Christian Indian and who a rebel. However, Padre Kino’s compassion and good sense win the day and he negotiates a truce with General Montalban.

It’s all rather sentimental, and this impression is heightened by the soppy music (Jaime Mendoza-Nava).

The movie was written and directed by Ken Kennedy, who also did The Legend of Grizzly Adams but no Westerns except an episode of 26 Men.

Honestly, e-pards, I’d give it a miss if I were you, though hard-core Westernistas will want to glimpse their former heroes of the silver screen in their dotage.