When reviewing Cannon for Cordoba the other day I made a few general remarks about the Western movie in the early 1970s. Dirty Little Billy is in many ways a classic example of the genre at this time. It has a lot in common (consciously or not, I don’t know) with Doc, of the previous year. Doc, also released by United Artists, had done a complete hatchet job on Wyatt Earp, portraying him as a corrupt, cowardly and pretty loathsome figure. Now it was Billy the Kid’s turn to be debunked. The pictures both also stressed the dirt, mud and squalor of the environment, with much very dark interior photography, and they had Altman-esque ‘naturalistic’ dialogue, with people mumbling, talking over each other and so on. Neither picture, however, had anything like the artistic quality of Altman’s McCabe & Mrs.Miller. 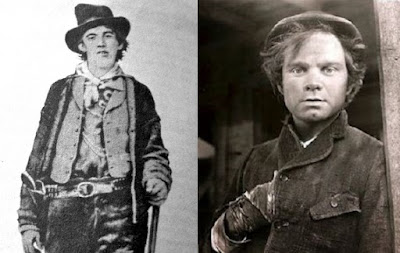 Having said that, although I don’t much like Dirty Little Billy as a Western movie, I do think it is quite a key moment in the history of the genre. If you wanted, you could say it signaled the decline of the form. Of course there were some good Westerns to come later in the 70s (The Shootist in 1976 is a prime example) and John Wayne was still making his big commercial oaters all through the first half of the decade which retained mainstream popularity (Chisum, Big Jake, The Train Robbers and so on) but it is fair to say that successful and big-budget Westerns were now in the minority. Even Western TV shows were being canceled. Westerns seemed to have less and less to say to the great American public.

Dirty Little Billy concentrates on the outlaw’s youth, in Coffeyville, Kansas. I don’t quite know why as there is no evidence, or even suggestion as far as I know, that the family tried to settle in that town, later to be famous for the götterdämmerung of the Dalton gang. It seems that the McCartys went from New York to Wichita, then Denver and thence into New Mexico, settling in Silver City. It doesn’t matter. It’s only a movie. Many of the characters in it are fictional anyway. 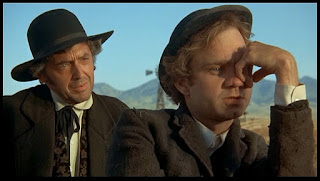 What do you want to do in life? Nuttin.

They left NYC in 1870 (there is a record of them in Wichita then) when Billy, son of Catherine and step-son of Henry McCarty, was probably only eleven years old (he was almost certainly born sometime between September and November 1859). Pollard was actually 33 at the time the movie was made, so it's stretching credibility somewhat. In common with most actors playing the homicidal teenager, there was little adolescent about him (of famous screen Billys, Audie Murphy and Johnny Mack Brown were 26 when they played him but Bob Steele was 34, Kris Kristofferson 37 and Buster Crabbe 38; Franklyn Farnum was 47!) though it must be said that Pollard was very baby-faced and could just about get away with it. 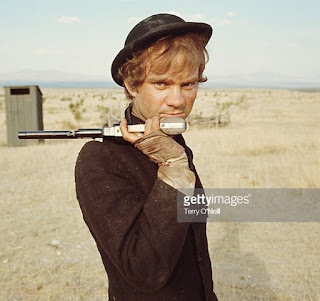 Pollard had become famous in Bonnie and Clyde in 1967 but as far as Westerns are concerned he had first appeared in an episode of Gunsmoke in 1964, then some other TV shows, and first done a big-screen oater in 1971, a Eurowestern with Brigitte Bardot and Claudia Cardinale. So Dirty Little Billy was only his second, and his first (and last) as star. The only other Western feature he appeared in was a dire spaghetti in 1976, Four of the Apocalypse. So we can hardly account him a specialist. In Dirty Little Billy he goes for a very mannered performance, constantly smirking, grimacing, rolling his eyes, looking off into space, and so on. This Billy is supposed to be “not all there”, a bit simple, even touched. The real William Bonney was evidently not like that at all.

We open with Billy, his mother (Dran Hamilton) and step-father (Willard Sage) descending from a train in Kansas, walking through a quagmire and buying or renting a ratty farm from a certain Dan Antrim (Charles Aidman), who is said to own half the town. All the buildings are very squalid and dilapidated. All the characters are absolutely filthy. Billy and his step-father detest each other. “You were a bum in New York and you’re a bum here,” McCarty tells him (both he and his wife have rather heavy and fake “Oirish” accents). In a key moment Antrim asks Billy what he wants to do in life. “Nothing,” is the reply. Eventually Billy leaves, goes into town and sees a man stabbed to death in the muddy street. He takes up with a highly disreputable and violent man, Goldie (Richard Evans, a regular on Western TV shows) and his woman, Berle (Lee Purcell, recently in JL Ranch). Goldie abuses the girl and prostitutes her, living off the proceeds.

Their base is a saloon, but it is no grand palace. Far from it. It is a dump (very reminiscent of the low dive where Doc Holliday meets Kate Elder in Doc). It is presided over by the genial Jawbone (Josep Elic) and the only other customer is a drunk, Charlie (Ronny Graham). Much of the action takes place here, with a lot of talking (or rather mumbling).

There’s a flurry of action when a card game with a buffalo hunter (Craig Bovia) descends into violence over a stupid insult (the hunter calls Billy dumb), Goldie takes offence and pulls a pistol, one of those giant Civil War ones, and half the shots misfire and the other half miss, which is all quite realistic (although one accidentally hits Charlie in the head). You feel the director went for ‘realism’, though how authentic it all is, well, that’s very much open to question.

The director and co-writer was Stan Dragoti, not someone I knew. Apparently he was a director of TV commercials, and co-writer Charles Moss (this was his only movie credit) was also a Madison Avenue man. Dragoti was certainly influenced by Robert Altman and Frank Perry (the director of Doc) but I’m not sure he was quite in the same league.

This fracas is followed by a vicious knife fight between Berle and the buffalo hunter’s woman (Rosary Nix) which Berle wins by cutting the other woman’s ear off. Blood, mud and nihilism are the order of the day.

All those very low-light interiors must have been challenging for cinematographer Ralph Woolsey, a Warners regular who reached the heights of being nominated for (though not winning) a Daytime Emmy for an episode of 77 Sunset Strip - fame indeed. He was behind the camera on episodes of most Western TV shows at one time or another and also shot the 1965 Rory Calhoun oater Black Spurs (which I must get round to reviewing). 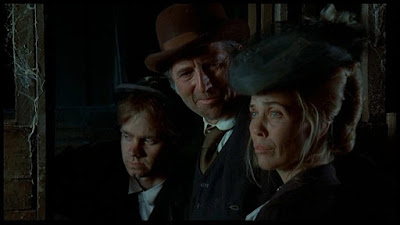 The McCarty family arrive in Kansas

I found the score rather irritating. It seemed to be low-grade circus music. Sascha Burland was the guilty party.

The movie was one of the last productions of Jack L Warner. After he sold Warner Bros. to Seven Arts, he produced two pictures, 1776, the film version of the Broadway musical comedy, and Dirty Little Billy, before retiring.

The townsfolk, led by Antrim, have finally had enough and want Goldie and his woman gone. Antrim (who is now sleeping with Billy’s mother; actually, he and Catherine McCarty seem to have been married, or together, well before, and Billy used the name Antrim at times) does a deal with Goldie: he may ride out unmolested if he goes next day. But the townsmen (one is Nick Nolte in his debut) have other ideas and try to murder them as they leave (Goldie riding and his woman walking). They succeed with Berle, who lies shot to death in the quaggy street, but Goldie, accompanied by a scuttling Billy, gets away. 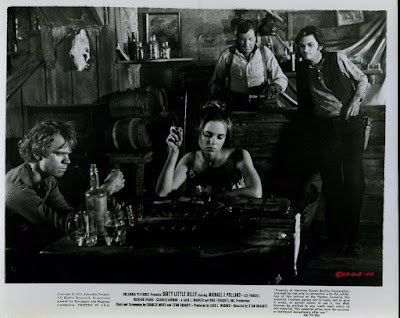 The final scene takes place up in the hills (there are some nice Arizona and New Mexico locations when we finally get out of that damned saloon) when they try to join up with a gang of rustlers led by Big Jim McDaniel (Severn Darden) and once again it all explodes into violence, with Billy finding that he has a talent for killing. He and Goldie plunder the corpses and set off, presumably for the life of crime for which Billy the Kid will become famous.

That’s it. It’s all pretty grim, though there are attempts at dark humor. The publicity slogan for the movie was BILLY THE KID WAS A PUNK and the way Pollard portrays him there’s no doubting that. Maybe it was a necessary corrective, after all those knight-in-shining-armor Billys there had been, the ultra-goodies played by Roy Rogers & Co. William Bonney was after all, a pretty nasty homicidal teenager who probably got the fate he deserved. Still, this one is a bit over the top. 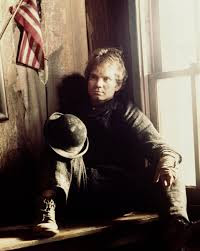 The movie is certainly also too slow and, even at only 93 minutes, too long.

Brian Garfield (RIP) said, “The monotony of [Pollard’s] dreadful performance leaves one hungry for entertainment that offers something other than brainlessness, buffoonery and bloodletting.” I don’t think he liked it. Another critic called it a “meandering, claustrophobic, and bleak revisionist western as seen through bloodshot eyes” and Tony Mastroianni in The Cleveland Press called it “the ultimate in grimy westerns, so labored in presenting a veneer of soiled skin, filthy clothing and muddy terrain that the effect is finally superficial.” The New York Times was a little politer but said, “Dirty Little Billy projects an unvarnished picture of the Old West, even if the contributions of the script and the dour Charles Aidman, the misused Lee Purcell and the rough Richard Evans are unconvincing. And one is inclined to agree with a confused Billy when he asks, ‘What's all this rushing about for?’”

It’s not my cup of tea, though I am glad to have seen it once anyway. As I said, it was at least a kind of two-bit milestone on the trail of that wonderful and noble monument to American culture, the Western movie. 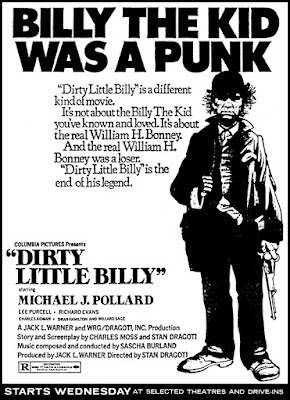 So you say
but I don't think this version is "the real William Bonney" any more than the other ones
Posted by Jeff Arnold's West at 8:33 AM