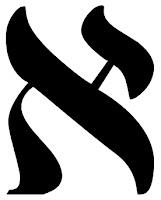 Regular readers of this blog, both of them, will know of the ALEPH, the Arnold Ludicrous Exclamation Point Hypothesis, which, well, hypothesizes that when Westerns were a bit dull or lackluster, studios added an exclamation point to the title in order to try (usually unsuccessfully) to pep them up. So we had the likes of Reprisal!, The Magnificent Seven Ride! (which really needed any help it could get) or The Jayhawkers! If it wasn’t funny enough, an exclamation point might help, as in McLintock! You can understand it, perhaps, in the case of the most boring ever title for a Western, Disney’s Smith, which became Smith! Not that it helped. In the case of Viva Villa! in 1934 you can understand it too because, well, Viva! Is an exclamation. This was extended to Viva Zapata! in 1952, but then to any vaguely Mexican-sounding Western, such as Villa Rides!, Bandolero!, Bandido!, Ride Vaquero!, and the like. ¡Three Amigos! in 1986 did it properly, with an upside down one first. In 1958, however, exclamation point inflation (what you might call exclamaflation) had reached such a pitch that it was felt a new film about Pancho Villa required two. Thus we got Villa!! The extra point didn’t help at all, I fear. Brian Garfield called it “pretty dull” and for once he was being restrained. I think making a dull Western should be added to the list of mortal sins. I must get on to the Pope about it.

Fox made it back-to-back with their earlier offering of Sierra Baron, which came out three months before, and the same locations and director were used, the former quite attractive, the latter (James B Clark) a plodder. Mexican cinematographer Alex Phillips got another job, and Paul Sawtell wrote the music again. Brian Keith, whose Western career we have been looking at lately, was common to both – in fact he topped the bill in Villa!!, even above the Pancho figure, our old amigo Rodolfo Hoyos Jr., only fourth in the cast list. Keith plays the inevitable gringo gun-runner without which these Mexican Westerns seemed unable to operate. 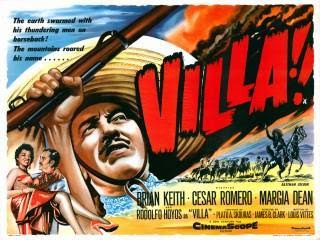 As was often the case, Keith seems bored throughout. Maybe he was going for a sad, world-weary character but it just comes across as bored. Like Robert Mitchum, who did a lot of these ‘Mexican’ pictures, Keith took pretty well any part that came along, went through the motions and didn’t even bother to watch the film when it was finished. When he did spark, like Mitchum he could be really good, but often he just didn’t bother. 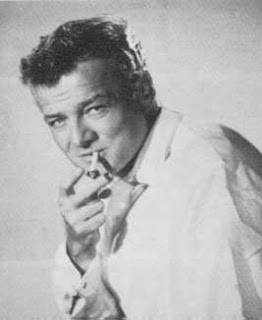 This one has good old Cesar Romero as Villa’s right-hand man and private executioner, based clearly on the life of Rodolfo Fierro (1880 - 1915), el carnicero, though considerably toned down for the American audiences. 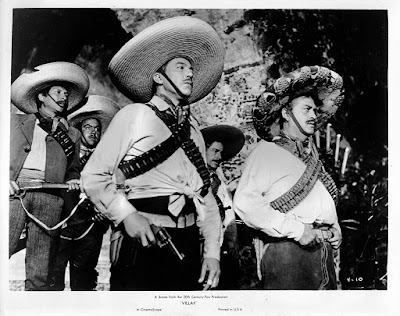 Third-billed was Margia Dean as a glam American cantina singer (though as a singer she made a good actress). Ms. Dean was a former child star (she had been Becky Thatcher) who became Miss California and Miss America. She would become known for what are often referred to as “cult classics”, the likes of 7 Women from Hell, but she did some B-Westerns too, starting as a saloon singer (again) in I Shot Jesse James in 1949 and then getting bigger parts in the likes of Last of the Desperados and Ambush at Cimarron Pass. In Villa!! she has too many songs. 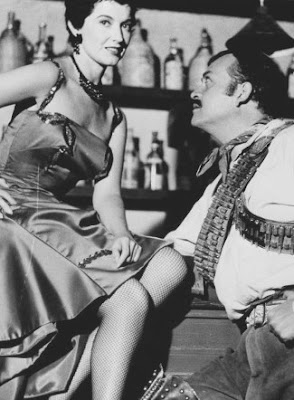 A couple of other Sierra Baron actors appear here and there in minor roles, such as Lee Morgan as a thug punched out by Keith in a saloon, a similar role to the one he had had in the earlier picture.

Though it has all the air of a low-budget B-Western, it was in CinemaScope and Color De Luxe, so Fox must have spent something on it.

It was written by Louis Vittes, and therein lies one of the movie’s problems. Vittes mostly wrote for very low-budget B-movies and TV, and only managed to reach the dizzy heights of Showdown at Boot Hill, another Fox oater of the time (Charles Bronson’s first Western as lead and really rather poor) and I Married a Monster from Outer Space. The writing of Villa!! is plodding and obvious.

The Mexican characters speak English to each other. There’s a lot of galloping hither and yon, like a 1940s B-Western. But the characters also have to ride those fake horses in the studio, with back projection, which looks really cheap. When the bandidos charge into a massive fusillade from the Rurales, a few stunt-extras fall off their horses but no mount is hit, improbably. Mind, I prefer it that way.

At least Madero makes an appearance, played by Ben Wright, from London, England. He accepts Villa’s fealty. Actually, this is the only part of the film in which the dialogue gets vaguely interesting. Pancho declares himself a true revolutionary and fighter for the downtrodden, and says his father’s father fought with Juárez (I wonder if that was true?) But mostly he is just a bandit, robbing trains for gold and so on.

Perhaps they should have tried three exclamation points.