I have mixed feelings about Kirk Douglas as a Western lead. He could be very good, for example as Doc Holliday to Burt Lancaster’s Wyatt Earp in Gunfight at the Ok Corral, as the lawman up against rancher Anthony Quinn in Last Train from Gun Hill and, especially, as the cowboy out of his time in Lonely Are the Brave. But some of his oaters were less than brilliant (The Way West) or even downright bad (There Was a Crooked Man, The Villain). He made an uncertain start in the genre in 1951 directed by Raoul Walsh in Along the Great Divide, did too ‘Big’ pictures in 1952, The Big Sky and The Big Trees, and The Indian Fighter was his fourth. He was prone to overacting and often had a look-at-me style. He is very acrobatic and dashing in this one, and in fact broke his nose when doing his own riding stunts. It is said that John Wayne turned down the lead (and a payday of $400,000) and so Kirk took the part himself. He is brash man-who-knows-Indians, hero Johnny Hawks. 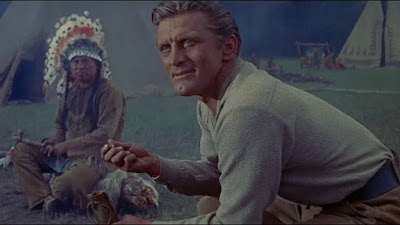 Kirk often overdid it
The Indian Fighter was the first picture of his production company Bryna Productions (named for his mother) and this gave him control. Later, he would make life hell for director Robert Aldrich on The Last Sunset, meddling in every aspect of the making of the picture, and it is possible that life wasn’t easy on the set of The Indian Fighter for André De Toth.

De Toth was a fascinating character. He was an ‘art’ director in Europe before World War II, fled to England when the Nazis rampaged over the continent and worked under Alexander Korda, then emigrated to the US in 1942, where he got a 2nd-unit job on The Jungle Book. An arty type he may have been but he was fascinated by the hard-boiled American movie and from 1944 directed urban crime dramas and horror flicks (most famously the 3D House of Wax – curiously, really, as he only had one eye and couldn’t appreciate 3D at all). He loved Westerns, first directing the fine Ramrod, a Luke Short story, starring Joel McCrea in 1947, then co-writing the Henry King-directed The Gunfighter with Gregory Peck in 1950 (another utterly superb Western), and going on to helm no fewer than six Westerns with Randolph Scott. His last Western as director, Day of the Outlaw with Robert Ryan in 1959, was another wonderful film. De Toth deserves great credit and brought much to our noble genre in the golden age of the Western, the 1950s. That The Indian Fighter was flawed here and there may have been as much Douglas’s fault as his. 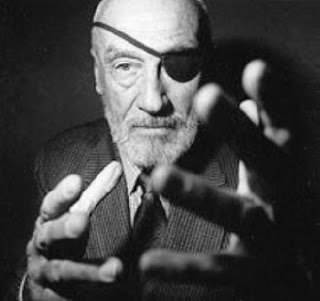 De Toth
Apparently they had some difficulty casting the leading lady and it was Douglas’s first wife Diana, who in the picture plays the feisty settler who sets her cap at but fails to win the dashing scout, who suggested a young model from Grosseto, Tuscany (a town I know well) Elsa Martinelli, then 20, whose dark sultry looks could make her pass as an Indian, daughter of Chief Red Cloud – the one who will finally find bliss in the arms of hero Kirk. In his autobiography The Ragman’s Son Douglas relates that he had a lot of sex with Martinelli at the time; perhaps Mrs. Douglas was less than pleased she had recommended the girl (though she and Kirk were divorced by then). Not that Martinelli was especially good in the part, but then it was a very two-dimensional role. She was just supposed to take off her clothes and show as much bare skin as 1955 censors allowed (i.e. practically none) and bathe in a stream, the second time with Kirk.

With la Martinelli
The screenplay was by Frank Davis and Ben Hecht from a story by Robert L Richards (as Ben Kadish). Davis had worked with De Toth before, on the less-than-excellent Springfield Rifle with Gary Cooper, but was not really a Western specialist. Hecht was a different story. One of Hollywood’s greatest writers, a multiple Oscar nominee and two-times winner, he most notably in our genre worked for John Ford on Stagecoach and would later do Duel in the Sun, The Fiend Who Walked the West and North to Alaska, among others. So he certainly knew his stuff. Pity he didn’t have more input on The Indian Fighter, then, because some of the script is pretty clunky. Richards/Kadish wrote the screenplay for Winchester ’73, with Borden Chase, so was another who had form.

Ben Hecht
There’s quite a good cast lower down the list. The two dyed-in-the-wool villains, who want the gold on Indian lands, are Walter Matthau and Lon Chaney. I think Matthau was a great actor. He didn’t do much Western stuff, though he was excellent also in the Audie oater Ride a Crooked Trail, was nasty as the whip-wielding baddy in The Kentuckian and would of course appear with Kirk Douglas again as the sympathetic lawman in Lonely Are the Brave. It’s a pity he didn’t do more. In this picture his character is Chivington – a name redolent with Indian-hating violence and loathsomeness. I don’t think Lon Chaney Jr. ever really held his breath just as the Best-Actor Oscars were about to be announced but never mind, he has the part of the dumb-ox sidekick-henchman so doesn’t really have to shine in the thespian arts. 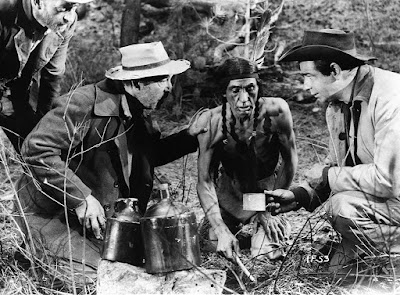 Lon and Walter get Hank drunk to find out where the gold is
There’s an entertaining contribution from Elisha Cook (two years after Shane) as a photographer, apprentice of Mathew Brady in the Civil War, who is determined to capture the beauty and interest of the ‘Wild West’ on his glass plates. There is an episode in which the writing comes the nearest it ever does to interesting when he and the Indian fighter exchange views on the value of these photographs. 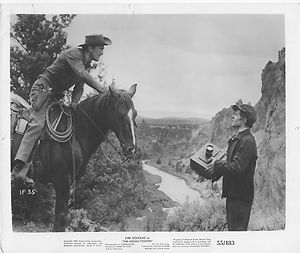 Brady's protégé Elisha wants to capture the West
Eduard Franz takes the part of Red Cloud, giving the role elder-statesman gravitas. Franz’s craggy face and accentuated cheekbones made him good casting in an age when Native Americans only rarely played Native Americans. He would be Chief Broken Hand in White Feather the same year. The real Red Cloud, (Lakota: Maȟpíya Lúta), born 1822, died 1909, was a key leader of the Oglala Lakota in the 1860s. He was one of the most capable American Indian opponents that the United States Army ever faced, and led a successful campaign from 1866 to ‘68 known as Red Cloud's War. The story of The Indian Fighter takes place just after the Civil War, so I guess it’s supposed to be Red Cloud’s War. 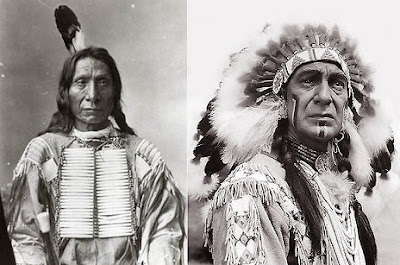 Red Cloud and his alter ego Eduard
Who else? Well, we have the admirable Alan Hale Jr. as a decent but plodding homesteader who wants the hand of feisty Susan (but she only has eyes for Kirk) and woos her by talking of the powers of manure. Hale (the third Jr. in the cast after Lon and Elisha, though all had dropped their Jrs. by then) is always worth watching. He made well over a hundred Western appearances between 1947 and 1979, on big screen and small.

...but she prefers the dashing scout (her ex-husband, in fact)
Then we have my old pal Ray Teal, this time as an especially scurrilous Indian-hater, liar and lynch mob leader. Ray could do bad guy with just as much conviction as goody and I always smile when I see his name in the credits. I know his bit will be good.

And Hank Worden managed to land two parts. I don’t know how he wangled that. He is an Army corporal who locks Lon and Walter up in the guardhouse, then he is the whiskey-sodden Crazy Bear, in a wig and with his voice dubbed, as if for one moment that disguised him. Both were really obviously Hank. This was already his hundredth Western appearance! Amazing.

And you can spot good old Lane Chandler as the head settler (sadly uncredited).

It was a big picture, shot in Technicolor and CinemaScope in lovely Bend, Oregon locations (with a fair bit at Kanab Fort, Utah) by the talented Wilfred Cline. Visually, it’s an attractive film. And the music, by Franz Waxman, is rather unusual, often dark and sinister, and well done. So The Indian Fighter certainly has its points. 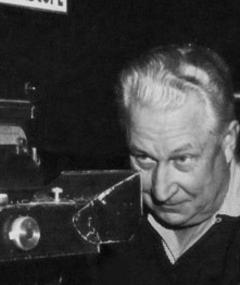 DP Wilfred M Cline
The middle part of the movie is a standard wagon-train picture, with wagonmaster Kirk leading the settlers through Sioux territory. We have the usual river crossings and so forth. De Toth does well, though, in showing us little vignettes of the various settlers, women in bonnets, children, a man singing, and so on. There are of course action scenes (aplenty) but De Toth goes for a more lyrical and bucolic approach than usual, and there are even hints of John Ford. This was among De Toth’s best efforts in the genre.

Bucolic
The wagonmaster deserts his post to woo the fair Indian maid and is away when trouble breaks out. Matthau and Chaney murder two Indians (inc. Hank) and violence erupts. The settlers make a run for it, back to the fort.

It all climaxes in a (fictional) attack by Red Cloud’s Sioux on the palisade (it’s one of those wooden stockades that Hollywood loved, not an open army post like Fort Laramie or Fort Apache) and the Indians use rather nifty fire-slings (created by Ted V. Mikels) to try to burn the fort down. This is done without music and is actually more exciting for that.

The Sioux attack the fort

Kirk (who has finally turned up again) offers to go out and bring the two villains to justice, in order to bring the Sioux back to the way of peace. The captain (Walter Abel) refuses, threatening to lock him up for dereliction of duty instead, but he goes anyway and heroically sets off to locate the bad guys, with Elsa’s help, and you may guess the result. It’s all a bit cheesy at the end. 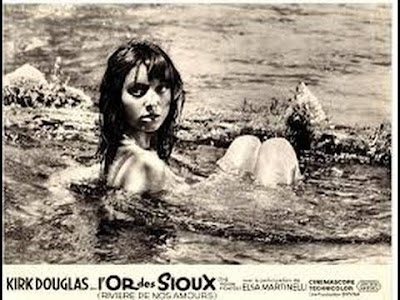 All rather daring for 1955
Anthony Mann dealt better with similar themes the same year in The Last Frontier (not his best Western but still an improvement on this one). The white man dealing with statesmanlike Indian chief idea, both sides beating out their firebrand extremists, was also better done by James Stewart in Broken Arrow (1950) and John Wayne in Hondo (1953), and this picture had little new to add. Some scenes (such as when the white mob tries to lynch the "Indian lover") seem almost copied. But it was well handled by De Toth and many of the cast, and is a pretty picture, and this one deserves its Jeff Arnold’s West three-revolver rating (not quite worth an Oscar, but close).