One thinks of MGM putting out big A-pictures all the time but they had their own line in one-hour second-feature B-Westerns to fill out theater programs, just like the other studios, and such a one was their wartime black & white oater Apache Trail. 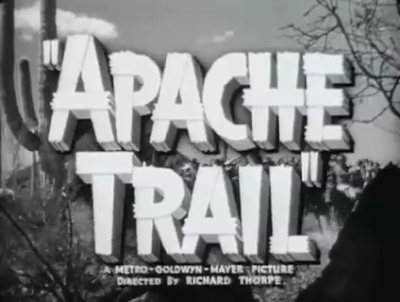 Anything with Apache in it was a safe bet and Apache Drums, Apache Warrior, Apache Rifles, Apache Uprising, Apache Ambush, Apache Territory, Apache Fury, and so on pretty well ad infinitum show that the word had real mileage in a title.

This one concerns a stagecoach to Lordsburg through Apache territory and coming so soon after John Ford had adapted Ernest Haycox’s Stage to Lordsburg into Stagecoach, that was perhaps no coincidence. The subject was popular. In fact Apache Trail too was from a Haycox story, Stage Station (1939).

Lloyd Nolan topped the bill - unusually, for a lead, taking the part of the bad guy (it did happen but was relatively rare). Nolan had been a mainstay at Paramount for years and had a rep for gangster pictures, working a lot with James Cagney and George Raft. But in the 40s he started moving round the studio system and taking different roles. He had some track (or trail) record in our noble genre because he had been the bad guy Polka Dot in Paramount’s 1936 The Texas Rangers (the Fred MacMurray one) and he had also been fourth-billed in the studio’s big Wells Fargo in ’37, with Joel McCrea. But this was only his third feature Western of (depending on your definition of Western) four, so he was hardly an expert in the genre. And indeed, he didn’t seem very suited to the oater. In Apache Trail he does have rather gangstery diction. 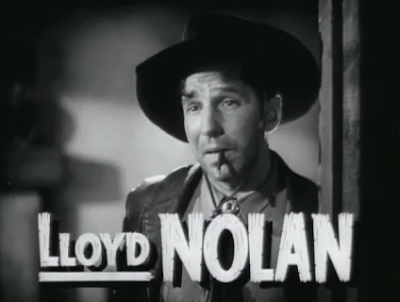 Co-starring was Donna Reed, then quite new (she had been signed to MGM the year before) and this was her very first Western. You probably remember her in Hangman’s Knot, Gun Fury, They Rode West, Three Hours to Kill, The Far Horizons and Backlash. But I’m afraid she was very unconvincing in Apache Trail as Mexican maiden Rosalia Martinez, and, to be honest, she was rather wooden as an actress in the part too. Her screen ma, Señora Martinez was much better, played by the equally non-Mexican but rather lively Connie Gilchrist. 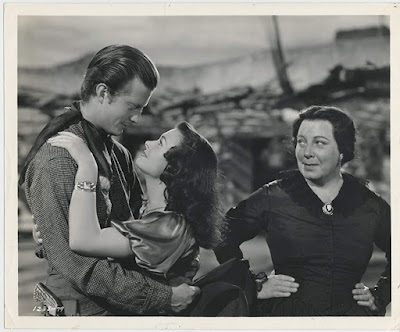 The good-guy part was taken by William Lundigan, another non-expert in Westerns (he had smallish parts in five) and in Apache Trail he is rather stolid and even dull. 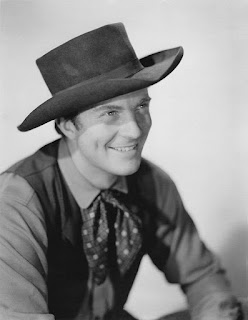 So I’m afraid the cast didn’t exactly sparkle, and the movie suffers as a result. Having said that, we do at least get Chill Wills in a colorful part and Ray Teal, as the stage driver. Grant Withers and Fuzzy Knight appear too. You can also spot Hank Bell’s mustache, with Hank Bell attached to it. So there is some interest. 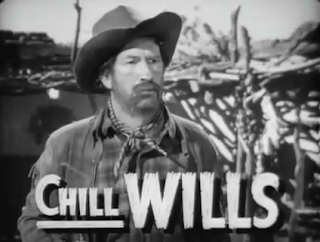 Chill works at the stage station

The director was Richard Thorpe, an MGM stand-by on low-budget B-movies. Westerns had been his stock in trade since the silent days, when he helmed a lot of Jay Wilsey oaters. This was already his 68th Western, and he’d still be going into the late 60s. The IMDb bio says, “He had no particular style, directing mechanically on the premise of keeping the camera rolling until an actor blew a line--or a scene suffered a mechanical malfunction--and then going back and completing it with a close-up or reaction shot.” Certainly the direction on Apache Trail is uninspired but I suppose competent. How much that was down to him, though, is in some doubt because the director was to have been Richard Rosson, and indeed Rosson worked on the film from the pre-production stage starting December 1941 until early April 1942 but after 31 days of shooting, he became ill and was replaced by Thorpe, who received sole onscreen credit, despite working on the film for only two weeks. 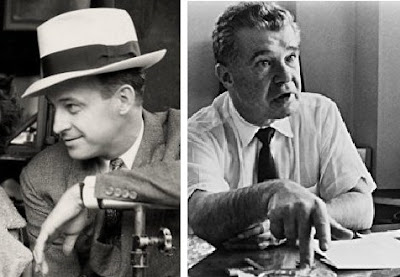 Maurice Geraghty was the writer who cooked up the screenplay from the Haycox story. I can’t find the original story so I don’t know how faithful the movie is to it. Geraghty worked on Westerns more than on any other genre and had contributed to various Three Mesquiteers, Gene Autry and Hopalong Cassidy pictures. Later he would reach the dizzy heights of Tomahawk and Rose of Cimarron, before devoting himself to Western TV shows. Gordon Kahn also contributed to the screenplay, uncredited. 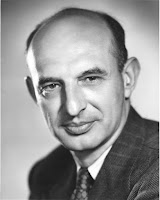 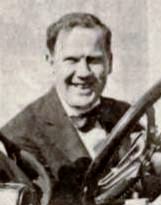 Apache Trail has quite a snappy opening as a circuit judge (George Watts), who confides to a fellow passenger his principle of “When in doubt, hang ‘em”, doesn’t even bother to disembark from the stage but hears the case against Tom Folliard (Lundigan) in about thirty seconds and shouts his sentence from the window of the departing coach.

Tom was involved in a robbery organized by his bad brother Trigger Bill (Nolan) though he is a goody really and refuses his share of the loot. Despite the fact that Tom has served time, the manager of the stage company (Emory Parnell) give him a job managing the stage station in Apache territory because no one else wants it. It’s there that he meets the fair Rosalia and her feisty ma. Chill is an employee there too. Luckily, Tom is “the fastest man with a gun in the whole Southwest”. “Second fastest,” argues Trigger Bill.

As you may imagine, the stage to Lordsburg arrives with a variety of characters. One is a posh and rather snooty dame (Anne Ayars), who flirts with handsome Tom, much to the annoyance of Rosalia, who has set her cap at him. Then there’s an Army major (Frank M Thomas) and a married couple (Miles Mander and Gloria Holden). But then Trigger Bill turns up (as he was bound to do), the Apaches attack and things get complicated. 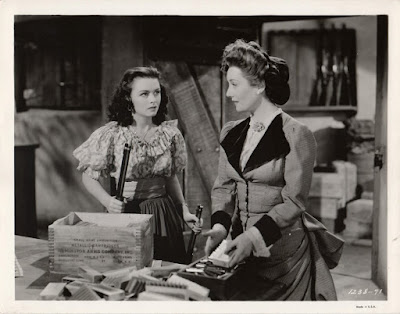 Geronimo leads “the whole Apache nation” in the assault but sadly he is never seen. For some reason the Apaches wear those Plains-Indian feathered war bonnets (probably the props & costumes dept. at MGM wanted to get some use out of them). There is an Apache boy, Cochee (Tito Renaldo) who works at the station (Tom befriended him) and is attached to the whites. He makes a noble self-sacrifice and dies saying, “Cochee good Indian” before expiring, which was a bit sickly.

There will be another self-sacrifice at the end. 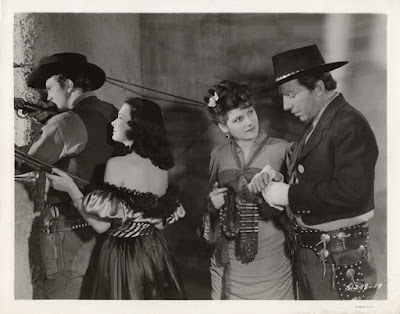 There’s some nice saguaro-studded terrain round Old Tucson, though most is shot cheaply on sound stages in the studio. 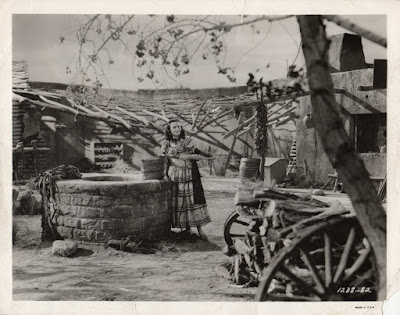 Mostly in the studio

The picture ends with a message urging us to buy war bonds.

All in all I didn’t mind it. It’s standard B-Western fare but no worse than many others of the period. Only the leading players let it down a bit.

MGM remade Apache Trail ten years later as Apache War Smoke, with Gilbert Roland, but sadly this is not available on DVD or even on YouTube so I can’t tell you much about that right now. 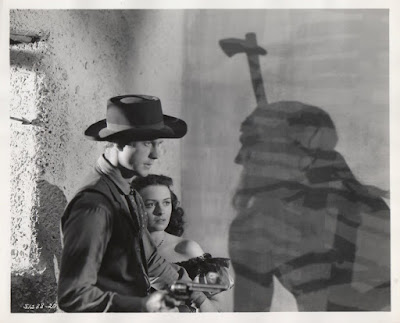