A year or two back I was staying with some friends in Denmark. The conversation turned, as of course it will turn, to Westerns. Hans opined that he was not a great fan of the genre (poor soul, I did pity him) but the best Western he knew was Gary Cooper as a Quaker, racing a neighbor in a buggy to Sunday meeting. He thought it was wonderful. I was ho-hum about this. How to be polite to my host, yet, well, suggest that Friendly Persuasion is not a Western at all, and secondly, it is a lousy movie?

There is a genre of American film that may be set in the nineteenth century American West but is still not a Western. I am thinking of the likes of The Missouri Traveler or Stars in My Crown, maybe Judge Priest. These are nostalgic visions of a bucolic West that never was. You may say that defines the Western tout court but I would rebut (and I do rebutting, in fact I am a specialist) that Westerns, true Westerns, have a grit about them that defies sentimental feel-good pastorales. 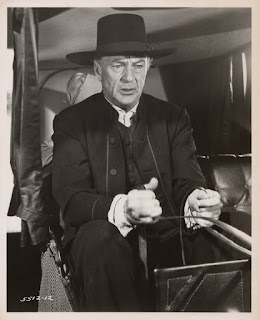 There are some movies that hover on the fringes of the Western. They may have guns and Stetsons and horses but they really belong to other genres: the dark psycho-thriller, for example, like The Night of the Hunter. The family-at-war saga, for another, like Shenandoah (a film which has soapy qualities in common with Friendly Persuasion). Comedies and musicals like the dire Many Rivers to Cross or the (to me) unwatchably cheesy Seven Brides for Seven Brothers. Or the war film-cum-cheap romance, like the trashy Gone With the Wind. These may be called ‘Westerns’ in TV guides, or by Danes, but they ain’t.

Still, I thought I ought to comment on Friendly Persuasion. It does, after all, star Gary Cooper, and it does become vaguely Western in the last reel.

The first thing to say about it is that Coop is splendid. When was he anything else, of course? But he had a real gift for comedy, and without him this film would be a complete disaster. As it is, it is close to a disaster.

It is grandly announced on the title screen as “William Wyler’s production of..” and Wyler directed it, too, of course. The winner of three Best director Oscars, second only to John Ford’s four, Wyler was perhaps a great director, though Gary Cooper’s biographer Jeffrey Meyer calls him “a laborious plodder with an inflated reputation”. Wyler, though, unlike Ford, was no Western specialist. He had directed a lot of Westerns back in the silent days but once talkies came along the few ‘Westerns’ he did (and they were very few) were generally hardly Westerns at all: The Storm, some scenes in Barbary Coast (credited to Howard Hawks) and The Cowboy and the Lady, for example, (the latter an unhappy project that Wyler did not complete) might be defined as Westerns – or might not. Really, only his very first talkie, Hell’s Heroes (1929), then The Westerner in 1940 and his last, The Big Country (1958) can be called true Westerns. And in my view The Westerner was the only good talkie Western Wyler made. In such a long and famous career it’s not a distinguished Western record. Of course The Cowboy and the Lady, The Westerner and Friendly Persuasion all starred Gary Cooper, so they had an enormous boost before they even got to the theaters. Coop did a whole series of weak pictures after his wonderful performance in High Noon, one of the greatest Westerns ever made. What a huge comedown Springfield Rifle was! Garden of Evil (1954) was quite good, with Hathaway, but Vera Cruz (also ’54) with Robert Aldrich was not. Nor was Friendly Persuasion. He was an actor who lifted bad pictures, but he was in a lot of bad pictures.

Frank Capra had written an early version of what became Friendly Persuasion in 1946, under the title Mr. Birdwell Goes to Battle, which of course reflected Mr. Deeds Goes to Town. Other writers revised the script, though finally the Writers Guild of America gave sole credit to Michael Wilson, best known for his work on It’s a Wonderful Life and, later, The Bridge on the River Kwai and Lawrence of Arabia. However, Wilson was blacklisted by HUAC and when nominated for an Oscar was declared ineligible. He had to sue Allied Artists. The screenplay was based on Jessamyn West’s 1945 book The Friendly Persuasion, which was a series of fourteen free-standing stories about the Birdwell family of Quakers. The film concentrates on the fifth, The Battle of Finney’s Ford. 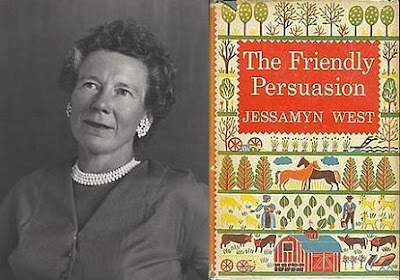 Jessamyn West, photographed by Johan Hagemeyer, and her book

As for the female lead, a key role, Meyer says this:

Wyler … had great difficulty casting the leading lady. He desperately wanted Katharine Hepburn – “no one else would do” – and also considered Jane Russell (nor exactly Quaker material); Margaret Sullavan, his former wife; Ingrid Bergman, still risky because of scandal; Maureen O’Hara, too fiery; Mary Martin, too hard to photograph; Vivien Leigh, too English; and Eve Marie Saint, too young, before settling on Dorothy McGuire, a compromise candidate he never really liked.

Coop wasn’t keen on McGuire either. 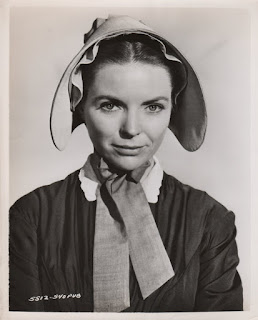 The rest of the cast benefited from young Richard Eyer, 11, going for a Tom Sawyer approach as the youngest child, Little Jess, famously at war with the family goose Samantha. 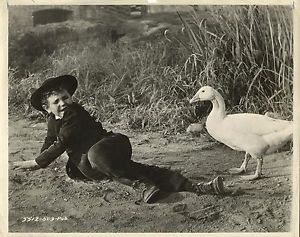 They had to pad Richard's trousers 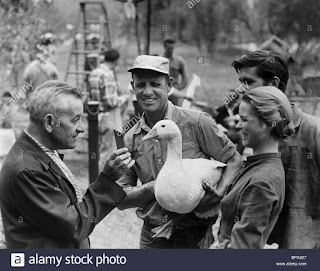 They had a lot of trouble with the goose (Alamy photo)

The role of the older son, Josh, went to Anthony Perkins, then pretty well still an unknown. He did well, in fact, as the conflicted youth. Perkins was fascinated by Coop and tried to imitate his rangy walk. He got short shrift, though, when on the set he tactlessly asked, “Coop, tell us about when you were a young actor.” 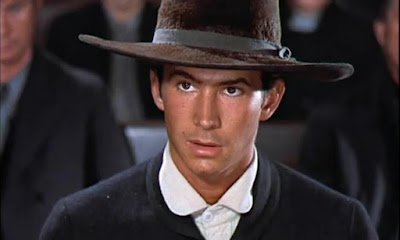 Walter Mirisch produced. He said it was impossible to control Wyler, who shot all sorts of extraneous coverage. 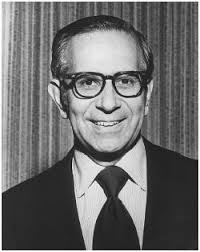 One of the great weaknesses (for me) of the film is that while the set designers aimed for a “Dutch old master” vibe and cinematographer Ellsworth Fredericks wrote that “the stylized lighting employed permitted the fine woodwork of the interiors to take on a rich, warm coloring”, the result was chocolate-box-lid kitsch. The farm was squeaky clean, the Technicolor over-bright and the look was picture-postcard in excelsis. Visually, the movie is sickly. 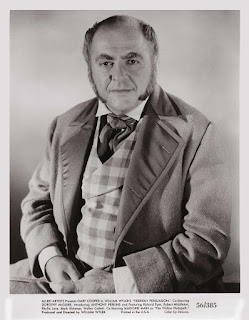 The excellent Robert Middleton is a friendly neighbor

The content is as sickly-sweet as the look of the picture. Corny characters, a thin plot and a lack of action until the last reel do not help. The film is full of bonnets and shawls, and the dreaded ‘family values’ are much in evidence, with a wholesome teen romance (actually, young daughter Mattie was played by the appropriately-named Phyllis Love, who was in fact in her thirties, though in the story she has a mental age of twelve). The nearest the film comes to transgression is a quarrel about a new organ and buggy-racing a neighbor (the excellent Robert Middleton) to meeting on Sundays. 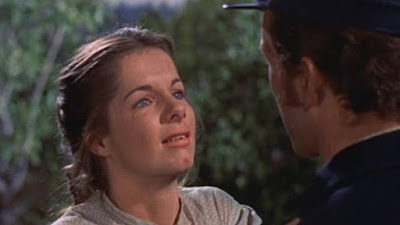 The 'teenage' daughter was a similar age to her screen mother

Another major weakness is the complete lack of mastery of the second person singular thee and thou. Either nineteenth-century Quakers were remarkably uneducated and unskilled in its use, or (more probably) author Ms. West was, or (more probably still) the screenplay writer and cast were. It’s not hard. The subjective thou and objective thee are straightforward. Where art thou going? It does not concern thee. In this movie the characters even use it for the plural – “Off to bed, all of thee”. I mean, really. Ironically, the only person who seems to have mastered the usage is the non-Quaker organ salesman, who remarks on “all this theeing and thouing” and asks “Hast thou an organ?” when we as yet haven’t heard a single thou from the Quakers. You end up shouting like some deranged pedant at the screen. Grace Kelly was also a Quaker with Coop in High Noon but the writers wisely eschewed the antique pronouns.

The film is also tediously long at 2 hours 17 minutes.

The Dimitri Tiomkin music is unbearably schmaltzy, entirely appropriate. There is a sugary ballad crooned by Pat Boone.

Though the movie is sanctimonious, it is hardly flattering of Friends. As Robert Hatch wrote in the Nation, the Birdwells “race horses on Sunday, admire themselves in mirrors, secrete a parlor organ in the attic, dance at county fairs, kiss soldiers in corners, and take up arms to repel the invaders.”

I will say, though, that Russell Simpson, who was, as John Ford knew, the ideal religious elder, is perfectly splendid as the Quaker elder statesman raising his eyebrows at the lifestyle at the Birdwell farm. Amazingly, he was uncredited – the best actor on the set apart from Coop. 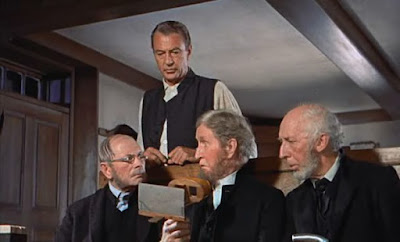 Elder Simpson is 'surprised' by a stereoscope

The whole Hudspeth interlude, though, is very low comedy and could satisfactorily have remained on the cutting-room floor.

The film did very well at the box-office: it cost $3 million to make and made $8 million. It was also nominated for six Oscars, though didn't win any. However, in what Meyer calls “a moment of temporary insanity” the Palme d’Or judges at Cannes rewarded it over Ingmar Bergman’s The Seventh Seal. In 1988 President Ronald Reagan took a VHS of the picture to Moscow and presented it to Mikhail Gorbachev, presumably as an example of what wholesome all-American life was all about. I hope Gorby wasn’t sick.

Personally, I think they should have cast Jane Russell as the Quaker minister. It might have made the film watchable.

But it was hard to explain all this to my friend in Copenhagen. 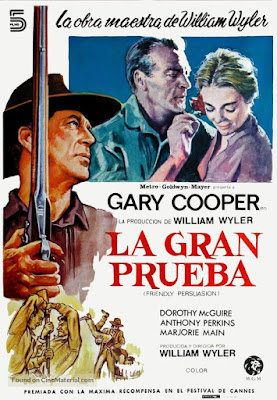