Black Patch is a late-ish George Montgomery Western, 82 minutes of low-budget black & white, but it does contain some points of interest. 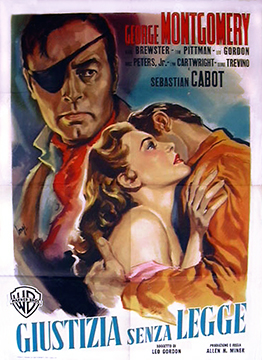 It was a Montgomery Productions picture, though director Allen H Miner was also credited as producer. Miner did mostly TV work but he was a real talent. A protégé of Robert Aldrich (not a great credential for being good at Westerns really, when you consider crap like The Frisco Kid or 4 for Texas, although Ulzana’s Raid was superb), Miner directed the outstanding B feature The Ride Back the same year as Black Patch. Both pictures have tension, interesting aspects of plot and are visually classy.

Then again, Black Patch was written by Leo Gordon. One of the best-ever Western heavies (Don Siegel once said, "Leo Gordon was the scariest man I have ever met") he was also very handy at the typewriter. He did the teleplay for various episodes of different TV Westerns, especially Tombstone Territory, and also the screenplay of the features Escort West and The Bounty Killer. As an actor he had appeared with Montgomery in Robbers’ Roost in 1955 and would do so again in Hostile Guns in 1967. 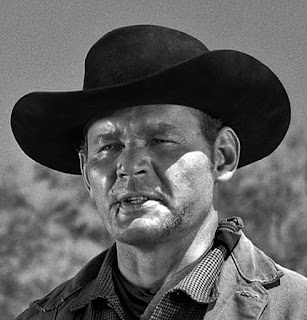 This picture was first film with music by Jerry Goldsmith, and the score is fine – dark, lugubrious and crepuscular. A certain Bert Plum is also credited but I don’t know how much Bert was responsible, and how much Jerry. 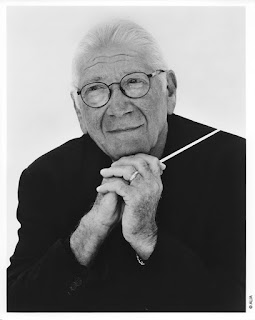 The DP was Edward Colman, who worked on a few B and TV Westerns (and Mary Poppins, though I don’t think we can count that). He didn’t have much scope with a limited-budget ‘town’ Western largely shot on studio sets but there are occasional quality touches, some chiaroscuro and a hint of noir.

George is the eye-patched Marshal Clay Morgan of Santa Rita, solitary, sad and somber. Montgomery does this part well; he was good at laconic. He had a sort of Jock Mahoney-ish tough taciturnity about him.  We are never told how he lost that eye but it obviously worries him still because he is often fingering the patch or mopping under it with a handkerchief. Of course the name Clay Morgan will immediately ring bells for Westernistas. Morgan, Clay, Cole, Virgil or any combination of them signify ‘gunman’, maybe lawman, maybe on the shady side of the law, or maybe a lawman formerly less righteous. By calling your hero Clay Morgan you endow him with certain Clay Allison or Morgan Earp characteristics, especially quick-on-the-draw deadliness. 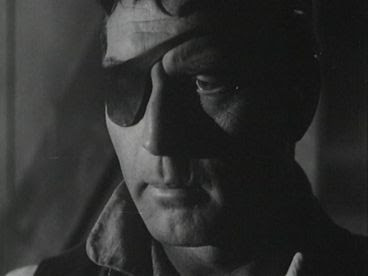 Hank Danner (Gordon, all in black) arrives in town to meet his wife Helen (Diane Brewster, quite often to be seen in TV Western shows but she also appeared with Montgomery again in King of the Wild Stallions (not yet reviewed) in ’59 and with Gordon in Quantrill’s Raiders in ’58). It is immediately clear that the true love of Helen’s life was Clay but he never returned home for her (trauma is suggested, wartime maybe; perhaps that’s how he lost the eye) and she married Hank instead. Hank and Clay were pals but now… Well, old passions are inflamed once more, though Clay does the decent thing and eschews all forms of adultery beyond one torrid embrace. Still, Hank is clearly jealous. 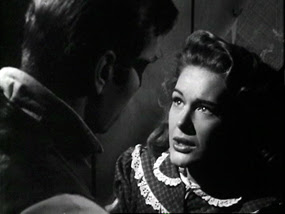 It was lerve but he does the right thing now

Another lawman and his deputy (Ted Jacques and, oh good, Strother Martin) arrive in town, looking for Hank – he robbed a bank back in their town, but to provide for his beauteous bride, not for base greed. George is obliged to lock his old pal up.

There’s a crooked saloon-owner, obviously, Frenchy De’vere, and he is played by good old Sebastian Cabot. He did something very similar the following year in Terror in a Texas Town. He plays the harpsichord (though it may have been a clavichord or a spinet, I’m afraid I’m not up on the differences) and it comes in handy for hiding loot. He has a loutish henchman, Holman, played by House Peters Jr., about whom I was droning on the other day when reviewing Terror at Black Falls. Holman and Frenchy cook up a scheme whereby they convince the jailed Hank to split his bank-job loot with them and they will bust him out of jail. But they double-cross him (Frenchy soaks Hank’s bullets in champagne so they will not fire, an exotic touch) and Holman shoots Hank in the back when he is out in the street. The marshal gets the blame, and tongues wag and gossips gossip (this part is quite well done by director Miner, who seemed to have a gift for filming common folk). 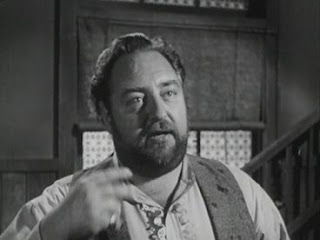 Frenchy also co-opts and exploits a town kid, Carl (third-billed Tom Pittman, small parts in three other big-screen Westerns and quite a few TV shows, especially Tombstone Territory, died in a very James Dean-ish auto accident the following year), known as Flytrap for his fondness for swatting flies. He is one of those youths who is desperate to own a gun and when he finally does (Helen gives him the dead Hank’s) he becomes a lightning-fast draw and homicidally arrogant. The lad is mentally challenged and by giving him a pistol and feeding him with strong drink, evil Frenchy incites him to murder the marshal. Of course this was in full rebel-without-a-cause teen trauma times. 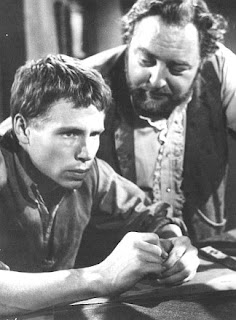 He suborns the teen rebel

We must be in the late 1870s because a salesman (Stanley Adams) demonstrates the new double-action Colt to the townsfolk, though he stresses the speed of fire of such a gun, what with not having to cock it every time, but the kid takes the wind out of the salesman’s sails by fanning his Frontier Colt, easily getting off more shots that the new double-action.

I spotted Dan Blocker briefly as the blacksmith (not the only time he took that part), John Mitchum as a saloon dealer and stuntman Boyd ‘Red’ Morgan driving the stage. Jorge Treviño, the memorable Mexican border guard in The Ride Back, has a comic-relief part as a trustee prisoner whom the marshal entrusts with the key. Lynn Cartwright is the abused Kitty, Frenchy’s woman, who finally leaves him, renouncing at the last moment the decision to kill him. 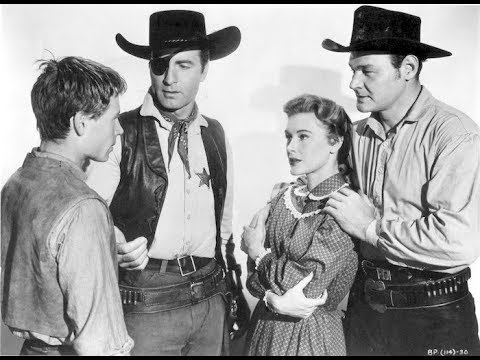 There’s a mechanical piano/orchestra in the saloon that plays the same tune interminably and contributes to the repetitive monotony of town life. The marshal isn’t the only depressive person here.

There’s a slightly anti-climactic, if touching ending, and unusually the bad guys are not killed, or even arrested.

The New York Times said of Black Patch, “there have been far worse little Westerns”, which was rather damning with faint praise, I guess. You get the feeling that the film toyed with being a little noir classic but didn’t quite make it. 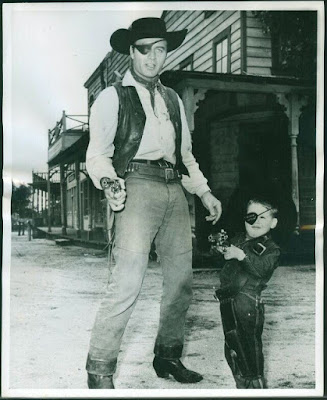 Montgomery & Son, on the set