The movie reviewed in our last blogpost, Massacre Canyon, a Columbia picture of 1954, had the keeping-guns-out-of-the-hands-of-the-Indians plot. Lt. Phil Carey and Sgt. Douglas Kennedy did all they could to make sure that the Apaches didn’t get hold of a shipment of 15-shot repeater Henry rifles. “If Geronimo gets his hands on ‘em, we can all cut our throats.”

Well, exactly the same story animates a later black & white B-Western, Ambush at Cimarron Pass. It could almost be a remake.

B-Western but not that bad

Westerns liked 'ambush' titles. There was Ambush, a rather good Robert Taylor oater of 1950, and there was an Ambush at Tomahawk Gap and an Ambush at Dark Canyon and a Colorado Ambush and an Apache Ambush, to name but a few.

It was a Regal Films production, released by Fox. It was in widescreen Regalscope, no less – and actually the print is very good. The visual quality is only spoiled by the actors constantly flitting between location shooting and unconvincing and very different studio sets.

In widescreen Regalscope, my dears

It was produced by Herbert E Mendelson. Herb Mendelson had been second unit director on a number of Roy Rogers, Allan Lane and Monte Hale oaters in the 1930s and 40s, as well as on Lippert’s Rimfire. In the early 50s he worked on Rose of Cimarron and San Antone, and in ’54 reached the dizzy heights of assistant director on Johnny Guitar. Then he moved into producing, and in 1956 he made a Western with Scott Brady, Mohawk. After that there was a lot of TV work, especially Sky King, but he went on with big-screen B-Westerns in the late 50s (there was evidently still some kind of market for them) and Ambush at Cimarron Pass in '58 used Brady again. 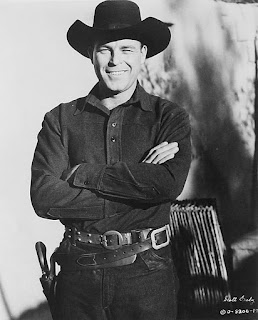 I like Scott Brady in Westerns. He was one of the rowdy Tierney brothers and though he was not quite the wild fellow that his brother Lawrence was, he didn’t do badly, facing a narcotics charge (later dropped) and he was accused of being involved in illegal bookmaking activities. But he was big and burly and rather handsome, and he suited oaters. He started in The Gal Who Took the West in 1949, he was Bloody Bill Anderson in Kansas Raiders in ’50, and he went on to be quite a regular in the genre through the 50s. He did kid roles: He was the Dancin’ Kid in Johnny Guitar and Billy the Kid in The Law vs. Billy the Kid. The Vanishing American, The Maverick Queen, Mohawk, The Restless Breed, there were quite a few, and he made appearances in Western TV shows too. In Ambush at Cimarron Pass he’s the lead, a tough Army sergeant tasked with getting those Henrys to the fort.

His co-star was Margia Dean. She plays Teresa Santos, the daughter of a ranchero whose home has been burned and family slaughtered by the Apaches, and she joins up with the soldiers. Actually, Ms. Dean was of Greek parentage but you know Hollywood: ethnic is ethnic, she’ll do for a Mexican. Dean was a former Miss California and Miss America who debuted on the big screen for Republic but freelanced for all the other studios. She was consigned to B-movies for most of her career and she did quite a few Westerns. She co-starred with Rex Reason in Badlands of Montana and appeared in Last of the Desperados, among other oaters. She turned to producing movies later on (unusual in those days for a woman) and became the vice-president of a major real estate firm, a Beverly Hills restaurateur and a Brentwood dress shop owner. 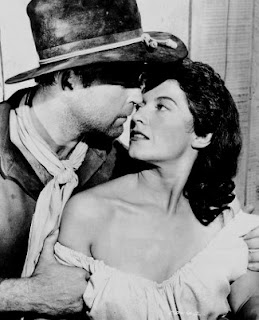 The glam Teresa falls for the sergeant

Clint Eastwood was in it. He received the princely sum of $750. This was pre-Rawhide but he looks exactly like Rowdy Yates. It was only his third feature Western (after his young lieutenant in The First Traveling Saleslady and an uncredited bit-part as a ranch hand in Star in the Dust) but Fox re-released Cimarron Pass on the back of Rawhide success, with Eastwood’s name higher up the cast list. He plays an angry and hostile young ex-Confederate soldier who has no time for the ‘bluebelly’ Sergeant Blake (Brady). It’s 1867. The ex-Rebs and the Army patrol are obliged to join forces in the face of the Apache threat to them all, but Williams (Eastwood) doesn’t care for that idea at all. Actually, Clint was still honing his acting skills at this time (code for he was pretty wooden). 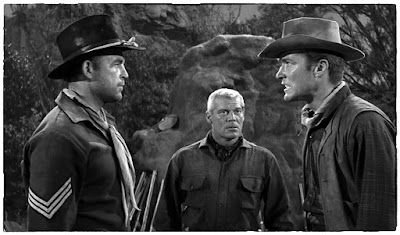 The captain of these ex-Rebs is Sam Prescott (in the middle in the picture above), played by Frank Gerstle, a character actor who appeared in endless Western TV shows between 1954 and ’69 and the occasional big-screen oater too, with small parts in the likes of Drum Beat or The Proud Ones. Capt. Prescott seems a decent kind of fellow who is ready to join up with the Union sergeant, and they earn each other’s respect as they go.

He has four men with him, Keith Williams (Eastwood), Johnny Willows (Ray Boyle, born 1925 but still with us, in Westerns since Ride Clear of Diablo in 1954 but who did mostly TV work), Cobb (Desmond Slattery, in his only Western – in fact his only ever film) and a very dubious judge, Stanfield, played by good old Irving Bacon. Bacon was an ex-Keystone who usually played minor parts like bar tender or townsman, so judge was a step up. He was a regular on Western TV shows for years and years but he had started with small roles in big-screen Westerns right back in the 1930s (he was a barfly in Fighting Caravans). I remember him as the comic-relief sergeant in Fort Ti. His Judge Stanfield is a nasty piece of work, a coward who incites other men to do his dirty work for him.

Keith Richards (no, not that one)

Brady also has four soldiers with him, a corporal, Schwitzer (Ken Mayer, who would get promotion and be a sergeant in Little Big Man) and three troopers (John Damler, Keith Richards, who had been Jesse James in Republic’s 1949 serial The James Brothers of Missouri, and John Frederick). And he also has a civilian scout, Henry (William Vaughn). But in addition, there is in his party a prisoner, the evil gun-runner Corbin (Baynes Barron), the one who was going to sell those Henrys to the Apaches, the swine. You can tell he’s a criminal because he is unshaven. And because we have seen the odd Western or two, we know that he will perish en route, probably at the hands of the very Indians he was trying to sell those guns to. Poetic justice you see. Plus, why should he survive when some of the goodies don’t? The cavalry detail has the Henrys, bound up in bundles, and they are determined to get them to (fictional) Fort Waverly at all costs.

So there you are, five Rebs, five men in blue, the scout, the prisoner and the girl. Thirteen in all. The Apaches drive their horses off and so the whites are obliged to try for the fort on foot, six days’ grueling march, carrying those Henrys. We know of course (as I said, we have seen a Western before) that they will be picked off one by one as they progress. Cobb is the first to go – he was minding the horses. Then the scout disappears (they only find his hat). And so it goes on. This is not the first time this plot device has been employed, e-pards, is it? 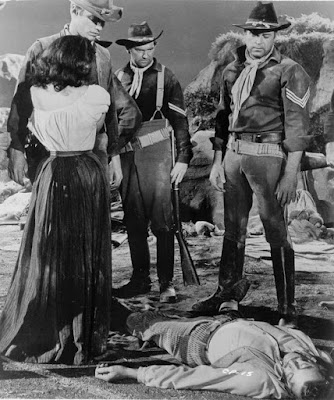 Another one bites the (studio) dust

Teresa is at first a traumatized figure but immediately, and very unconvincingly, she starts flirting with the men, in gray or blue. This will stir things up. She shows her low-cut blouse provocatively to Clint. But she soon attaches herself to Sgt. Brady. 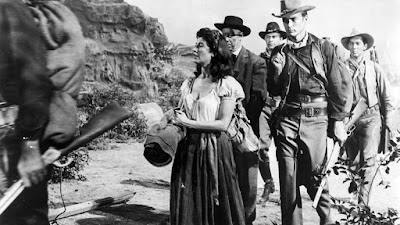 The sergeant gets into a fist-fight with Clint (no contest, Brady was far burlier and probably an expert brawler) and later Clint, urged on by the slimy judge, is just about to shoot the sergeant in the back (with his 1873 model Colt – it must have been an advance prototype) when the Apaches attack.

Under cover of the gunfire, Judge Stanfield does a deal with prisoner Corbin, liberating him so that they may escape together, but of course once free, the lowdown gun-runner stabs the judge in the back and makes off alone. He is duly shot down by the Apaches. Well, neither judge nor gun runner was a great loss. 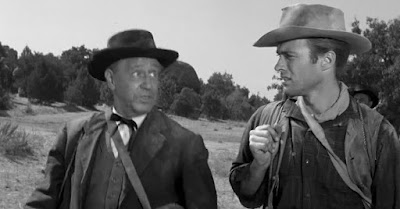 Well, they get to within a day’s march of the fort, much depleted in number, and rather anti-climactically decide they can’t carry the rifles any further, and they can’t let them fall into the hands of the Indians either, so they burn them. Clint calls the sergeant Matt and has learned respect for a real man, whatever the color of his uniform. The sergeant and Teresa entwine. The End.

Oh well, it’s not too bad, though Clint reportedly described it as "probably the lousiest western ever made." A bit harsh. It was made in eight days on a shoestring budget. The director was Jodie Copelan, not a name I knew. It turns out that this was his only Western in the chair.