Not a stellar cast

We were talking the other day about Wallace MacDonald, producer of B-Westerns. Some of them were not bad – I am thinking of the likes of The Hard Man with Guy Madison or The Nebraskan with Philip Carey or Ambush at Tomahawk Gap with John Hodiak – though others were pretty routine, like Return to Warbow or The Black Dakotas. I’m afraid Gunmen from Laredo was in the latter category. It was MacDonald’s only stab at directing a Western as well as producing it. As a director, he made a good producer. 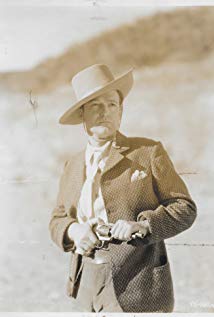 Wallace MacDonald in Fighting Thru, 1930

Actually, I’d go further. Gunmen from Laredo is stilted, and it has a clunky script and some wooden acting to add to the rather ham-fisted directing. Like all 50s Columbia oaters it had something. It wasn’t a total dud. It was in color, with some nice ‘Western’ locations (California standing in for Texas). But all in all it’s a bit of a bore. It was MacDonald’s last foray in the genre. He’d started as an actor right back in the silent days: he was in Fighting with Buffalo Bill (1926) and Whispering Smith Rides (1927).

Robert Knapp topped the billing. Knapp was a regular in minor parts of Western TV shows and also appeared in small roles in a few big-screen oaters such as Jubal, Revolt at Fort Laramie and a couple more but this was the only time he led in one, big screen or small, and to be brutally honest, I’m not surprised. In Gunmen he plays rancher Gil Reardon whose cattle drive is attacked and his Mexican cowhand (Martin Garralaga) and wife (Jean Moorhead, Playmate Of The Month, October 1955) are brutally slain. He too is left for dead. The perpetrator of this heinous crime is Laredo resident Ben Keefer (Walter Coy). We are told that Reardon killed one of Keefer’s cowboys in Dodge City, and though it was in self-defense, Keefer has exacted revenge. 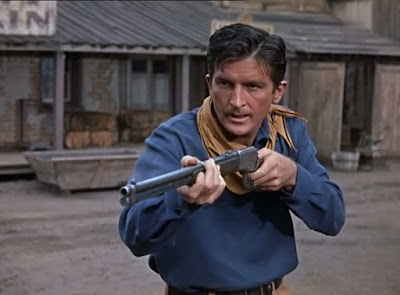 His only lead in a Western

Well, Reardon survives – the bullet just creased him, you know how they do. And of course he wants Keefer, and sets off, afoot, for Laredo. So it’s a revenge Western.

Coy had been Aaron Edwards in The Searchers, so respect, but he was more memorable for me in a tiny but powerful part in Warlock as the sheriff run out of town by the ruthless rancher and his yahoo cowboys. I also quite liked him as henchman in Five Guns to Tombstone, when he disarms a fellow of a derringer and scornfully tosses it aside. But like Knapp he did TV work mostly. He’s competent here as the bad guy. He owns a saloon, natch, for bad guys in Westerns were almost obliged to.

Reardon finds El Dorado (the saloon) and quickly dispatches Bob Sutton (John Cason), one of the Keefer henchmen, but though Sutton drew first, Reardon is promptly arrested for murder. Keefer tells him that there isn’t “room in the Territory for the both of us” (MacDonald and his writers – in this case Clarke Reynolds, who also worked on Shotgun and Shalako - specialized in corny clichés). There’s a trial but it’s the usual travesty of justice that we see in Westerns. The circuit judge (Harry Antrim) is obliged to find Reardon guilty after the perjury of witnesses and the verdict of the bought-and-paid-for jury. So it’s ten to twenty-five years in the state pen. Actually, it’s not the state pen. For some odd reason, though they are in Texas, Reardon has to serve his time in Unionville, New Mexico. 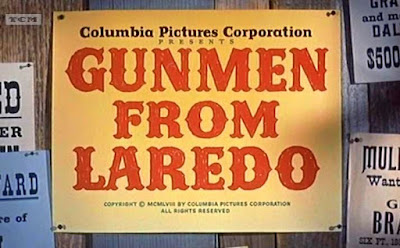 You wonder why Columbia bothered

Of course he can’t stay there for a quarter of a century, or even a decade, because the movie would kinda stop. So he escapes.

One good thing: a new US marshal arrives and it’s Paul Birch. So at least we got some good acting and a believable tough Westerner. This marshal, Matt Crawford, immediately understands that Keefer has treed the town and is a villain, and sets about proving it. 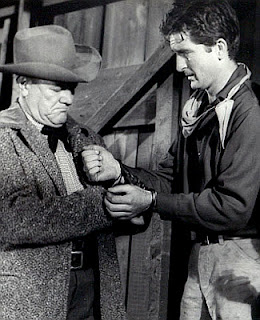 Marshal Birch is tasked with taking Knapp to prison

Enter the Indians. Fleeing Reardon finds a Mexican-Mescalero maiden, Rosita (second-billed Maureen Hingert, aka Jana Davi, Miss Ceylon 1955 - so she was almost Indian) tied to a tree and he fights the cruel Chiricahua Delgados who has done this. It’s Pahoo! Well, X Brands, anyway. Reardon cleverly manages to get Delgados to stab himself. Now he has a companion in the shapely shape of Rosita, who, luckily, knows the way across the desert to Laredo. He also just happens to find fresh horses, some guns and some clothes to replace his prison suit. Lucky, wasn’t it. 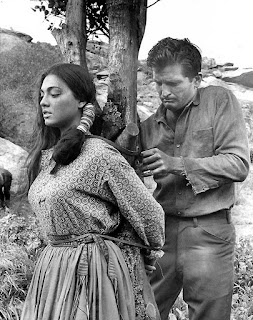 But the cruel Chiricahuas, whom Rosita detests, notably Delgados’s dad Coloradas (stuntman Charles Horvath, often an Indian) are hot on their trail. A lengthy chase ensues. It’s a curiously green, arboreal and lush desert they cross. It looks remarkably like Bronson Canyon in Griffith Park, LA. At one point there’s a fake dust storm. They shelter from it in one of the Bronson Canyon caves (also used as the Batcave) and she picks up a stiff stuffed rabbit, which I suppose she means to cook. 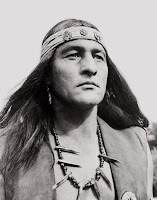 After supper they canoodle, but the camera discreetly pans away. It was 1959, after all. He doesn’t seem to have mourned his dead wife very long.

There’s quite a lot of to-ing and fro-ing now as Marshal Birch and a couple of deputies get involved, as well as the Chiricahuas under Chief Horvath, who finally catch up to them. Reardon challenges the chief to a hand-to-hand combat, winner take all, loser skedaddle. You may guess who wins (though I’d back burly Horvath any day against skinny Knapp). So the whites ride off. 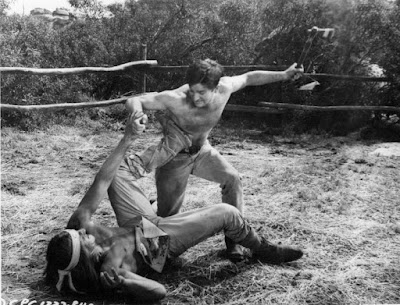 They get back to town. “Laredo,” announces Reardon, so that we know. Badman Keefer has got wind of Reardon’s return and he has stationed one of his ne’er-do-well brothers, Walt (Ron Hayes) on a roof, in bushwhacker mode, and the other, Jordan (Jered Barclay) by his side. But Reardon makes short work of both brothers (they deserved it because they were in on the first-reel wife-murder too) and Keefer weasels out of a 1:1 showdown by throwing away his gun. Of course he knows that no Western hero, even a B-movie one, can shoot an unarmed man. But he can’t resist a sneaky move. All these ‘deaths’ are remarkably badly staged; they do those fake grimaces and clutching of stomachs before falling. 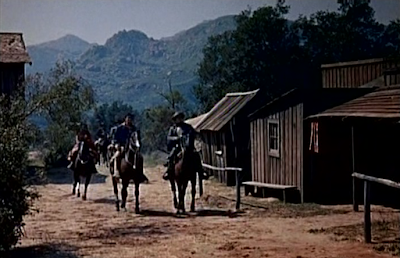 "Laredo," they announce, as they enter the Iverson Ranch

The ending has a whiff of Stagecoach about it as the marshal sends the escaped prisoner on his way with the gal. Married bliss and a Mexican rancho loom.

Sorry to be so critical but really, this Western isn’t very good. Still, I suppose they tried to cram every known Western trope into it. It’s only 67 minutes and has all the air of a cheap second feature. Odd that Columbia thought it was worth a release in those full-on TV Western days. I gave it two revolvers rather than the one it probably deserved for Paul Birch and also because it's not a spaghetti. It's not that bad. 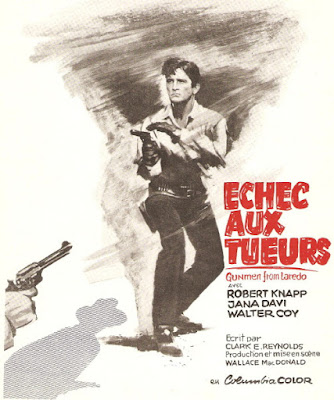