We were reviewing The Lawless Breed earlier this month, a Raoul Walsh-directed Western starring Rock Hudson, released by Universal in January 1953. Well, later that same year (it was released in October) Walsh and Hudson got together again for another Western, for Columbia, Gun Fury. 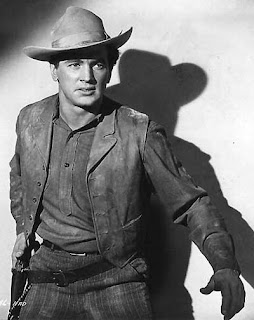 Walsh perceptively understood that Hudson (left) was good in Westerns. Many people think of Rock as a matinée idol who starred in bedroom comedies with Doris Day, but that came later. His first three roles, starting in 1948, were bit parts as a second lieutenant, a detective and a truck driver. In 1950 he was Young Bull, the Indian who kills John McIntire to get the famous Winchester ’73. He had a small part as Burt Hanna in Tomahawk in 1951. And the following year he graduated to a fourth-billed role as gambler Trey Wilson in Anthony Mann’s Bend of the River, a James Stewart Western. Then he was third-billed as Robert Ryan’s brother in the Budd Boetticher-directed Horizons West. He had come up in the Western world. Walsh rated him highly and put him under contract. He rode very competently and looked the part in cowboy duds. He never really ‘shone’ as a Western actor but did well as the strong, silent type. His part as John Wesley Hardin in The Lawless Breed was his first lead role in a Western (if you discount the only semi-Western Scarlet Angel), and Gun Fury was his third (in between his two Walsh oaters he was back with Boetticher leading in Seminole, released in March ’53). So we can say that by the time of Gun Fury Rock Hudson was a leading man in the Western genre.

Gun Fury came out at the height of the 1953 craze for 3D. It was a cumbersome filming process but it was briefly very popular. It didn’t last and even in ’53 the vast majority of theater-goers would have seen it in 2D. But those that were able to don the special plastic eyeglasses were amazed. The film-makers made the most of it by having actors lunge with a knife directly at the camera or shoot their Colts into it, which made the spectators jump. Hondo, released by Warners the month after Gun Fury, was another 3D Western. Actually, Leo Gordon was in both. It’s curious in a way that Walsh helmed a 3D picture because he only had one eye (he had lost the other when a jackrabbit crashed through his windshield back in 1928 when he was to have been the Cisco Kid in In Old Arizona) so he couldn’t appreciate the 3D effect at all. The same was true of André De Toth, another eye-patch-wearing director, when he made the 1953 horror flick House of Wax. De Toth also made The Bounty Hunter, a Western starring Randolph Scott, which was shot with 3D in mind but finally released in standard format in October ’54, the craze having petered out. John Ford, though, despite his frequent eyepatch, had two eyes and could see 3D, though he never made a 3D picture. 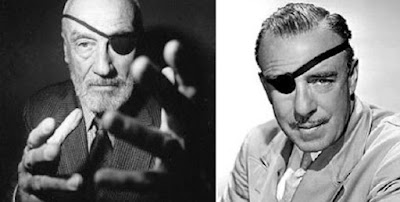 3D tricky for them

The movie is in Technicolor and was photographed by Lester White, who also shot The Stranger Wore a Gun and Fort Ti that year. The locations are great, those orange rocks round Sedona, Arizona that we are so fond of. The colors are bright and the print on the DVD very good.

When you first start watching Gun Fury, you might be tempted to think ho-hum, a 50s Western with Rock Hudson. And up to a point you keep thinking that all the way through. However, at one point the picture suddenly starts to grip you. The movie is tight, action-packed and has some very good dialogue. Could it be written by Burt Kennedy? 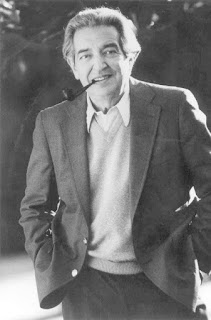 Actually, the screenplay was by Irving Wallace and Roy Huggins, from the three-author novel Ten Against Caesar, by a gaggle of Grangers. Wallace was a novelist and short-story writer, author of The Chapman Report and The Prize, who also contributed to the Western movies The Gambler from Natchez and The Burning Hills, as well as penning episodes of TV Westerns such as Yancy Derringer. Huggins had directed and written Hangman’s Knot with Randolph Scott the year before Gun Fury and would go on to write many Cheyenne and Maverick episodes, and later The Virginian. Both Wallace and Huggins knew their business and the story and dialogue of Gun Fury are pretty darn good. The basic theme is anti-pacifist: the hero hates violence but eventually comes to see that a man’s gotta do what a man’s gotta do – with a gun. 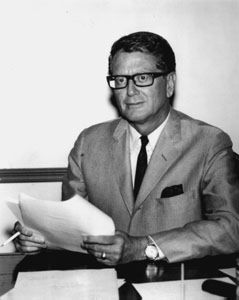 
Sometimes the titles referred to the revolver itself, such as Billy the Kid’s Smoking Guns or Jane Got a Gun. Sometimes the word gun referred to the user, like Five Guns to Tombstone or Top Gun. Sometimes the guns received adjectives, like The Quick Gun or The Quiet Gun. Numbers of guns were popular, as in Five Guns West or Forty Guns (sometimes written as digits, like 6 Guns or 40 Guns to Apache Pass). Then there were all the titles which referred to a specific gun, such as Winchester '73 or Springfield Rifle. Places were named for the weapons, like Gun Street or Last Train from Gun Hill. The six-shooter was certainly popular. The Western Money, Women and Guns rather sums up the genre.

Rock is Ben Warren, who has come out of the Civil War revolted by violence and determined not to fight ever again. He is going to California by stage with his fiancée Jennifer (Donna Reed), to start a new life. 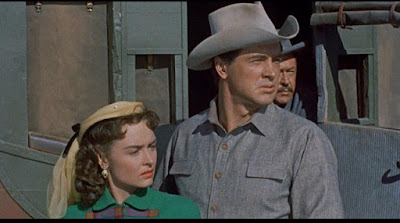 But also on the stage is smarmy but crazed Confederate Frank Slayton (Philip Carey, the captain from Springfield Rifle) and his sidekick Jess (Leo Gordon the Great in his first big role - the same year he was to be Ed Lowe, shot by John Wayne in Hondo). Their soldiers who are the military escort are in reality Slayton’s thugs and they hold up the stage, shoot Rock and leave him for dead, and the whole gang run off with Donna. Rock comes to (the bullet only creased him, you know how they do) and naturally gives chase. He soon joins up with Jess, who has fallen out with Slayton and wants revenge, and an Indian, Billy Whiskers (Post Park), also out for vengeance because Slayton abducted his woman too. Of course the Indian immediately becomes the gofer, being given the menial tasks in a slightly Tonto-ish way. 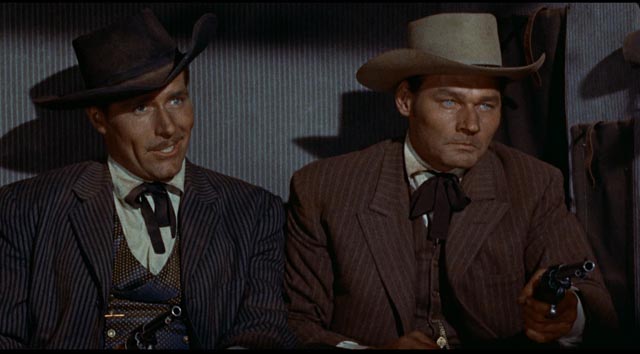 Stage passengers you don't want to be traveling with

So Jess becomes a semi-goody, an unusual departure for Leo. He was one of my favorite ever Western bad guys. My spirits always lift when I see his name in the cast. 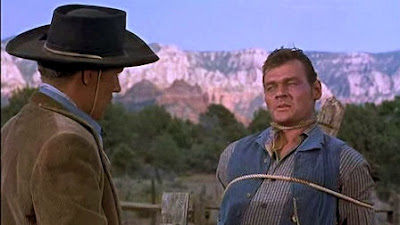 In the gang we also find Lee Marvin, 29 but already in his 14th film and 5th Western, and Neville Brand, 19th movie and 3rd Western. They have very Elvis-style oiled haircuts. Marvin is rather bolshie and doesn’t care for the dame being taken along and slowing them down. 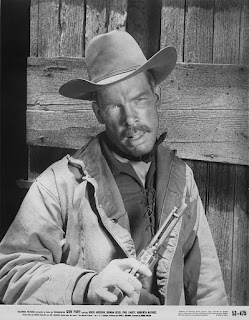 Lee excellent (as always) as heavy

The notion of the Californian idyll, that ranch where they will live happily ever after, is a standard trope in Westerns. California was (even) farther West, so even in a Western it could still be the promised land where a man was free. When the West got too violent, or too civilized, that was where pioneers headed. Sometimes they went to Mexico but usually it was California. Hondo and Angie Lowe set out for there at the end of the movie Hondo, as do Henry Fonda and Betsy Palmer in The Tin Star. You will be able to think of other examples.

There’s a Mexican girl Estella (Roberta Haynes) who had been Slayton’s squeeze but he throws her over in favor of Donna, and even gets Blinky to shoot her horse (he shoots his Winchester onto the 3D camera) and leave her afoot. So she joins up with Ben, Jess and Billy Whiskers. 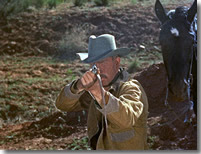 Lee fires into the camera

A gang member, Curly (Bob Herron) tries to help Jennifer but the ploy fails and Curly is staked out and trampled to death for his pains. Gradually the arithmetic is changing. Ben started alone and it was 1 against 9, but then it became 2:8, then 3:8 and now 4:7. Slayton’s gang is slowly being whittled down and the odds are shifting. Something similar happened in another Walsh Western, Along the Great Divide. 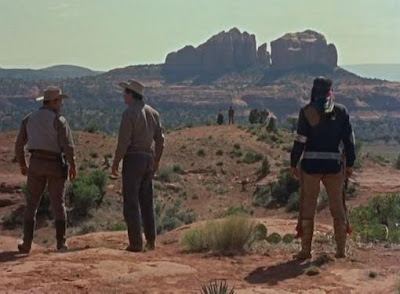 John Dierkes appears briefly as a sheepherder from whom they get another horse and some guns.

Jennifer is a bit wet. She faints when Ben is shot during the stage hold-up, then screams when she sees a rattler. Not sure how’s she going to cope on that California ranch. Still, she does her best to shape up and make a run for it when the gang aren’t looking. 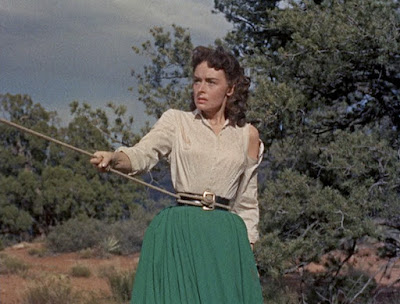 Reed a good actress but she had a rather submissive part

Eventually Slayton proposes a deal. He will give Jennifer back if Ben hands over Jess. The ending is, I must say, on the improbable side. But as you may imagine, there’s a last-reel reunification of lovers prior to the Calif journey and all’s well that ends well – except for the various corpses littered on the red Arizona earth.

Gun Fury never becomes a great Western. It’s not in the Hondo class and certainly not anywhere near other ’53 offerings like The Naked Spur or Shane. But it is nevertheless very enjoyable, with a strong cast giving some good performances (Carey nearly steals the show). It rattles along (Walsh was very good at pace) and if you like a 50s action Western with zip (and why are you reading this blog is you don’t?) you’ll enjoy it. I did. Again. 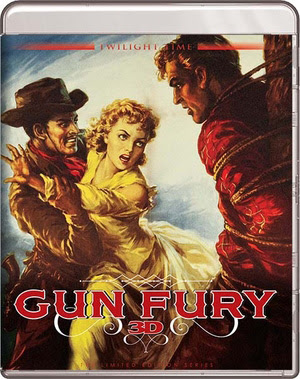