The Ballad of Lefty Brown was released at the South by Southwest Film Festival in March last year. It had an estimated budget of $8 million. By the end of the year it had, according to IMDb, grossed $5,559. Oh dear. Because it’s actually rather good. 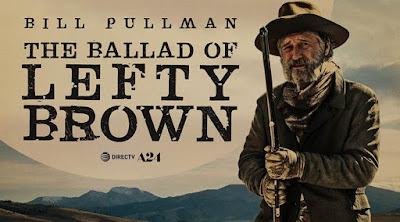 For one thing, it’s visually fine, with lovely photography by David McFarland of quite stunning Montana locations. The ghost town of Bannack was used for a lot of it, and very atmospheric it is too. Bannack is famous as the place where Sheriff Plummer and two of his deputies were hanged, without trial, in 1864, and that is appropriate given the subject matter of this picture.

For another thing, Bill Pullman is superb as the titular Lefty. Mr. Pullman has not specialized in our noble genre but he was Ed Masterson in Kevin Costner’s Wyatt Earp, and, more importantly, he directed and starred in the second-best of the many screen versions of The Virginian, in 2000. He gives us a splendid performance as limping, aging Lefty, a bit of a shambling ne’er-do-well on the whole but with, it becomes evident, the heart of a lion. Interviewed, Pullman said, “It was more the perception of characters around him, that he was a fool.” Pullman plays Lefty close to the edge of comedy but remains on the grimly serious side. It might have been tempting to go for the Walter Brennan or even Gabby Hayes ‘cranky old-timer’ approach but this Lefty is much less comic than those. Lefty Brown was, according to the IMDb trivia page, based on the gunslinger Lefty BJ Wheeler, but I don’t know who that is and can’t find anything about him. Can you tell us more, dear reader?

Pullman is a right-handed Lefty

Peter Fonda’s in it too, as rancher Edward Johnson, but Mr. Fonda seems to make it his business these days to appear in Westerns briefly, maybe so they can put his name on the DVD box, and then get written out in the first reel. Cameos, they used to call them. He plays what we think will be the leading figure in the story, an ex-lawman who has a rough way with malefactors (in the opening scenes he hangs a man without trial who shot another over a $2 poker game) but he has become Senator Johnson now and is off to DC. Just before leaving, though, he departs with Lefty after some rustlers of his horses and is (spoiler alert – stop reading here) surprisingly shot in the head, with unsurprisingly fatal results, by said rustlers, and lies dead on the prairie. 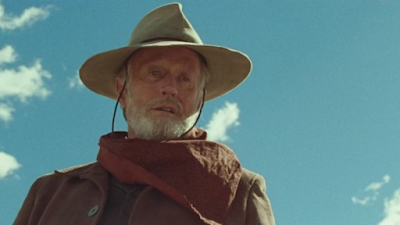 The senator’s widow blames Lefty, though unfairly: the shot came out of the blue from a Sharps at long range. Mrs. Johnson is played by Kathy Baker (whom I think of as Joanne in The Ranch) and she is a tough lady. She casually kills a rattler with her parasol on the ranch and she often sets her jaw in a way that resembles granite. 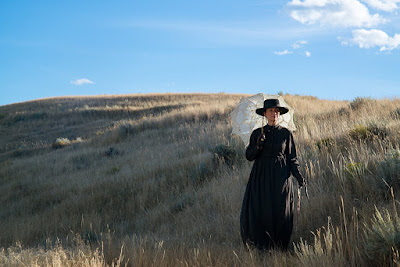 Kathy Baker is the senator's widow

But the senator didn’t leave a will and the law says that the ranch must now go to his nearest male relative. The widow is miffed. Enter (fictional) Governor Jimmy Bierce to help by forging a will, the great friend of the family, played by Jim Caviezel, one of those actors who believes fashionably that if you deliver your lines in a loud whisper it will be more meaningful and earnest, whereas in fact it’s just silly and annoying.

The governor is accompanied by another bosom pal, famous US Marshal Tom Harrah, the subject of sensational dime novels, played by Glaswegian Tommy Flanagan, who is, for me, Chibs Telford in Sons of Anarchy. He’s rather good as the ex-alcoholic (he is of course not the first lawman who took to the bottle in a Western) who has cleaned up but will backslide under the strain of the forthcoming events. These people, the senator, the governor, the marshal, the senator’s wife and his partner Lefty, were intimate friends and have come up together in the world. Nothing can separate them. Or can it? 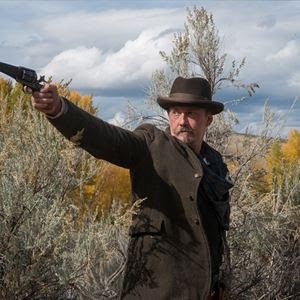 Just before dying, the senator had given Lefty his rather fine rifle but Lefty doesn’t feel worthy of it and inters it. In doing so, he makes a vow, saying, “I’m gonna get that sonofabitch [the man who shot the senator] or die tryin’. My word ain’t worth much but on this it is.” So it becomes a pursuit/revenge drama – and rather a good one.

On his hunt, Lefty comes across a boy, Jeremiah (Diego Josef) and this lad, who reminds me a little of the Schofield Kid in Unforgiven, is sort of adopted by Lefty and joins in the chase. The youngster has a fancy two-gun rig and is mockingly called Wild Bill by Lefty. 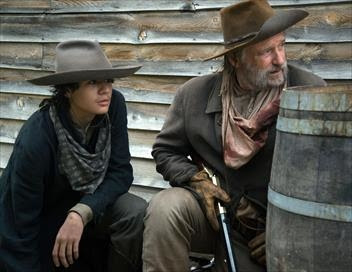 Lefty gets an apprentice

Now Marshal Tom arrives, the kid’s great hero from those novels. The governor has sent him to get Lefty back: the Army will find the killers. But Lefty will have none of it. He made a vow. And he persuades Tom to join them, so now they are a posse.

Well, thanks to Lefty they do finally come up on the base assassin, one Frank Baines (Joe Anderson) and his loathsome gang. Lefty will come into their cabin from the back, Tom from the front, while the boy is ordered to hold the horses. Naturally, he won’t.

Just then a fellow in a suit appears, Mr. Crobley (Adam O’Byrne) and it seems he is the governor’s man, and he has money for the villains. Was it blood money? Had the governor paid the outlaws to kill the senator? Ah, there’s the rub.

Anyway, there’s a shoot-out, the boy Jeremiah is shot, the marshal slides back into the bottle and leaves, and Lefty is left in the soup. 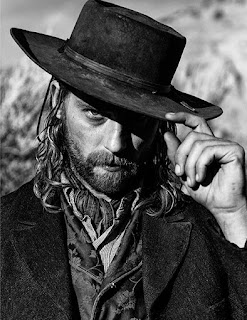 How it pans out, whether the governor was a false friend, if the boy survives, all of this I shall not tell you, dear reader. Wouldn’t want to spoil your fun. I can reveal, however, that there’s a good last-reel showdown in Bannack (the Meade Hotel features strongly) and there are deaths.

The film was, dare I say it, a tad long and could probably have done with sharper editing. But the actors were all good, the plot solid, and there were enough references to older Westerns to keep us entertained.

I think the amount the movie grossed must be a mistake. Anyway, they’ll recoup more with DVD sales and TV rights. I bought a DVD, so that’s another $9.99 to the good.