Ken in his heyday 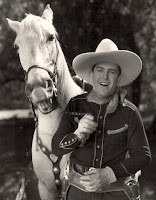 We were talking the other day about Ken Maynard (pictured left), how he separated (with mutual relief) from Universal and made his first feature, In Old Santa Fe, for Nat Levine at Mascot. When Universal chief Carl Laemmle asked Maynard why his latest production was such a very bad picture, the frustrated Maynard retorted, "Mr. Laemmle, I have made you eight very bad pictures." But actually, those Universal Westerns were probably the high-water mark of Maynard’s career. He had successfully transitioned from silent star to the talkies and was, in the early 1930s, at the height of his popularity. The films were formulaic, yes, and very evidently low budget, but then so were 99% of Westerns. Honor of the Range will do as well as any other as an illustration of the Universal Maynard talkies.

It’s one of those pictures in which the star plays the hero and the villain. He is both the sheriff, Ken Bellamy, and his twin brother, the storekeeper Clem Bellamy. The sheriff is all macho and tough while Clem is timid and pusillanimous. They both pine for the town beauty, Mary Turner (Cecilia Parker, who would later become Mickey Rooney’s sister in MGM’s Hardy Boys series). Mary’s dad is a cattleman and the sheriff has suggested that Mr. Parker put the $30,000 he has just got for the sale of some cows in brother Clem’s safe. The trouble is that badman Rawhide has pressured Clem into giving him the combination… 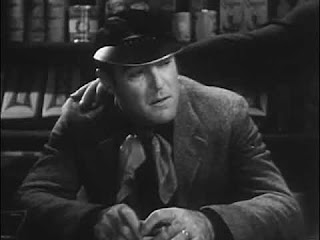 Rawhide is played by Fred Kohler. Kohler was a frequent silent and early-talkie heavy and was especially memorable as Deroux in John Ford’s The Iron Horse in 1924. He also featured in those Zane Grey tales Paramount made, appearing in both the original silent ones and the Henry Hathaway-directed talkie remakes with Randolph Scott. He died suddenly from a heart attack in 1938 but not before he had been the heavy in three Maynard oaters.

Fred is the heavy Rawhide

Rawhide draws the sheriff and posse off on a wild goose chase while he is doing his nefarious deeds but it doesn’t work: Ken returns in time and there’s mucho shootin’, and then the villains set the store ablaze. Luckily, Tarzan is there and he rings the bell to summon the fire engine.

Cecilia is the sheriff's squeeze

The townsfolk are mighty suspicious because the storekeeper is the sheriff’s brother and it was clearly an inside job. One loudmouth, Boots (Frank Hagney, who was The Hawk in Warners' John Wayne B Ride Him, Cowboy in 1932) deposes Ken and becomes sheriff himself (the townsmen approve because unlike Ken, Boots likes a drink), incarcerating the ex-lawman in a storeroom, whence he, naturally, escapes.

The bandits have a rather nifty lair, with secret cave doors. Of course they don’t foil Tarzan. He’s far too clever for that. Rawhide has also rigged the place with dynamite to blow if they are discovered. This was rather rash because actor Kohler had in real life lost part of his right hand in a dynamite accident. But he doesn’t seem to have learned his lesson. 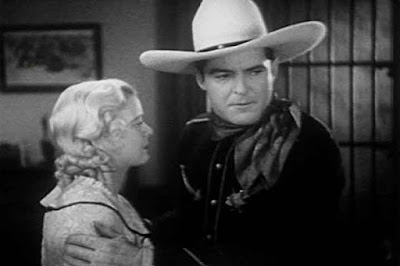 He'll get the girl alright. No worries.

There’s a rather bizarre moment when the girl plays a harmonium to avoid having to participate in hanky-panky with the villain.

The rest of the story (it’s only 53 minutes in total so they have to get a move on) is devoted to how Clem rehabilitates himself and dies heroically to save Ken and Mary. Redemption of a badman was of course a standard element of the Western movie. 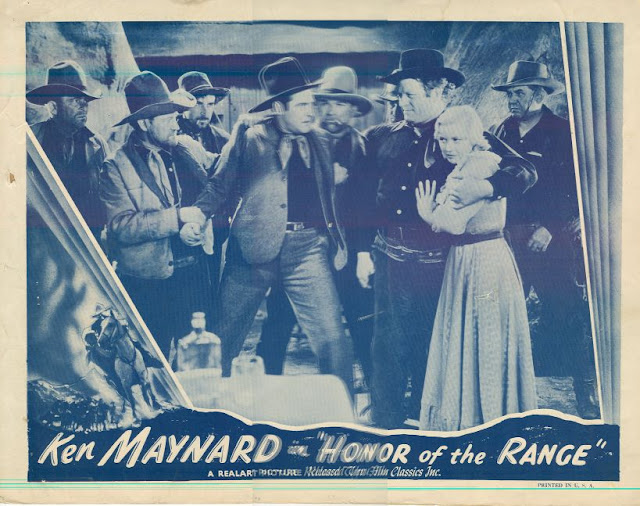 There’s some trick riding of Tarzan by Ken, as per usual, and some songs. In one, Ken disguises himself as old Charley the vaudevillian (Eddie Barnes) and is obliged to do a song-and-dance on the stage of the Paradise saloon but he is rumbled when his white wig falls off, revealing his jet-black brilliantined hair, and is obliged to leap from rooftops and suchlike to make his escape and do a few stunts. 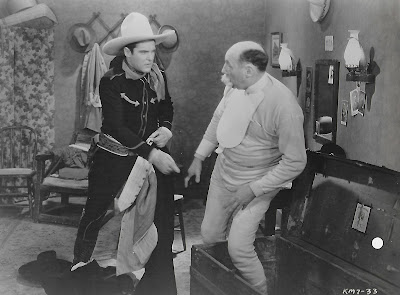 Of course there’s a showdown Rawhide/Ken fistfight and Ken finally goes off to married bliss with Mary, The End, you know how they do.

It was directed by Alan James, who first directed a Western (for Universal) in 1919, often working with Franklyn Farnum, who appears as the saloon keeper in Honor of the Range. He directed no fewer than sixteen Ken Maynard oaters so he and Ken must have got to know each other quite well. Mind, they all pretty well had the same plot. 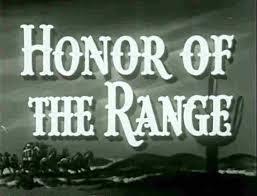