Rather unconvincing conversion to liberalism

“The essential American soul is hard, isolate, stoic, and a killer. It has never melted.”

This well-known if rather harsh judgement, by DH Lawrence, appears first on the screen when we watch the recent Western Hostiles. Do you think it can be true? The first reel of the movie (if motion pictures still have reels these days) seems to offer proof, as extremely violent Indians and correspondingly brutal white men come into conflict in nineteenth-century New Mexico. But gradually, as the story develops, which it has plenty of time to do, we are led to the view that perhaps the English poet and novelist, who lived in and knew New Mexico, might have been wrong. Though the tone of the film is dark and melancholy, the final message is almost breezily optimistic. 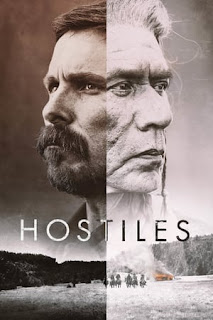 Enemies who will undergo a (slightly unconvincing) rapprochement

It opens, before the title, with a scene that must have been influenced by The Searchers, a remote farm attacked by Indians. These raids happened all the time, of course, we know that, though we are in 1892 and the raiders are Comanche, so I don’t know how common that was by then. The white Quaid family is rather too perfect, with hard-working pa brutally slain and scalped and his beautiful young wife teaching her angelic and intelligent children. Everyone is spotlessly clean and has perfect skin. If I’d been the director/writer I’d have wanted more ‘ordinary’ settlers. The attacking Indians are only glimpsed but certainly look frightening when we do see them. The mother (Rosamund Pike) is the only survivor, and understandably, traumatized.

We now meet an Army patrol, commanded by a Captain Joseph Blocker, who is, in Lawrence’s words, hard, isolate, stoic and a killer. He and his men roughly capture some Indians and drag them into Fort Berringer. Blocker is played by Christian Bale. You may remember Bale as the gutsy farmer in the semicentennial anniversary remake of 3:10 to Yuma, and very good he was in that too. He is outstanding in this one.

Back at the fort we start to get to know Capt. Blocker better. He reads Julius Caesar in the original Latin and has a reputation as a man of few qualms when dealing with Indians is concerned. “I hate ‘em,” he announces, unequivocally. He has a sergeant (Rory Cochrane) suffering from melancholia. “There’s no such thing,” his captain and friend tells him. But the sergeant is depressed and wants out of the Army after all these years. 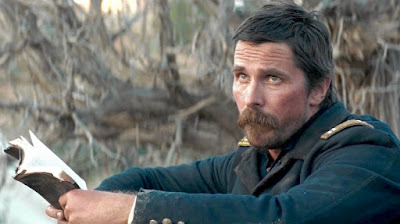 He reads The Gallic Wars in Latin

President Benjamin Harrison (in the White House 1889 to 1893) has agreed to let the old Cheyenne chief Yellow Hawk, who has been imprisoned at the fort for the last seven years, return to his ancestral lands, as a PR exercise, and a very reluctant Capt. Blocker is tasked by the colonel (Stephen Lang) with escorting him home to Montana.

The old Indian is played by Wes Studi, something of a go-to these days for Native American parts (of whatever tribe), then 70 (gosh, even older than your Jeff) but still going strong – he is to star in the announced Timberwolf - and ideal in the role of a vaguely Geronimo-like elder, though unlike Geronimo dying of cancer. Wes was in fact Geronimo in the 1993 Geronimo: An American Legend and you will doubtless also remember him in Dances With Wolves.

We kinda sense that as the journey goes on the Army captain and Indian chief will learn mutual respect, and, in the face of the common enemy, the Comanche, they duly do.

On the way they come across the burnt-out farmstead and Mrs. Quaid joins the party. In her dead husband’s hat she looks rather like Cate Blanchett in The Missing and she is, in that modern way, equally independent and feisty, if you are allowed to call a woman feisty these days. She empties a pistol into a Comanche body. A weakness of the film, though, is that while she is so virulently anti-Indian, to the point where the mere first sight of Yellow Hawk and his family gives her hysterics, she too-suddenly becomes their friend on the trip, bonding with the Cheyenne women, who braid her hair, and helping them with the washing-up. At 134 minutes runtime (the movie is actually too long) the director and writer had all the time in the world to develop this rapprochement more subtly but in fact we are surprised, even shocked, by the lovey-dovey relationship that is immediately evident.

Ms Pike does her Cate act

Another failing, perhaps, is that the Indian parts are, as so often was the case in Westerns, relatively weak, with Studi given very little to say (yes, he’s supposed to be stoic and taciturn but not to this extent) and the other members of his band (Q’orianka Kilcher, Adam Beach, Xavier Horsechief and Tanaya Beatty) pretty well reduced to ciphers. Given that Cooper seems to have wanted genuinely to deal with the dispossession of and other crimes committed against Native American peoples by white local and national institutions, and the film does rather wear its heart on its sleeve in this respect, you would expect more of an Indian ‘voice’. It wasn’t as if time was short. But it’s all seen through the eyes of the whites.

The film had its world premiere at the Telluride Film Festival on September 2, 2017, and had a limited release in the United States by Entertainment Studios. The widow of credited screenwriter Donald E Stewart (of Jack Ryan fame) had found the Hostiles script when moving houses. Stewart, who died in 1999, had not submitted the manuscript to any studios. The director was Scott Cooper, who adapted the manuscript into a screenplay, creating several parts; it is his only Western (to date) as director, though as an actor he was in Broken Trail. The picture went into production without a distributor, with a budget of almost $40m, a gamble for financier Ken Kao. Before its première, Cooper invited a Cheyenne chief onto the stage to bless the theater, and the chief’s wife made an emotional speech endorsing the film.

Visually, the picture is absolutely superb. Masanobu Takayanagi was the cinematographer, his only Western and he is evidently a master. There are some stunning shots, especially, I thought, Rembrandt-like interiors and portraits, and the Anthony Mann-influenced mountain scenes. The New Mexico and Arizona locations are splendid.

There is perhaps an Ulzana’s Raid vibe to the picture, with its violence, harsh terrain and hard-bitten, experienced characters dealing with conflict. But it has a more blatantly liberal agenda. AO Scott in The New York Times said that “’Hostiles’ itself wants to be both a throwback and an advance, not so much a new kind of western as every possible kind — vintage, revisionist, elegiac, feminist. What makes the movie interesting is the sincerity and intelligence with which it pursues that ambition, heroically unaware that the mission is doomed from the start.” Yes. But the picture is saved by the magnificent acting and its wonderful appearance.