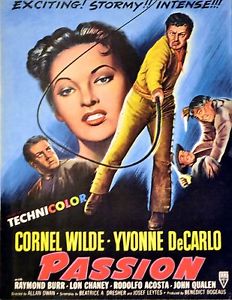 The slightly lurid title might have applied to any torrid romance but this is in fact an early Mexican-California Western (well, vaguely Western) set in a time and place where Zorro might have been expected to make an appearance at any mo’. It stars Cornel Wilde as the dashing Juan Obreón and Yvonne De Carlo in two parts: as Obreón’s wife Rosa and her tomboyish sis Antonia. They are the granddaughters of elderly ranchero Gaspar (good old John Qualen).

It’s one of those rich-landowner-wants-the-whole-valley plots. Arrogant Don Domingo (Richard Hale) wants to evict old Gaspar but Gaspar says he’s staying put come what may so the wicked don sends his hired thugs, including Castro (Lon Chaney Jr. with an embarrassingly bad accent) and led by the evil Sandro (our old pal Rodolfo Acosta), to shoot the place up and burn it. They duly do so, killing Gaspar and his elderly wife, Grandma. What swine. Not only that, they shoot Rosa, Juan’s wife, so now Yvonne only has one part to play. 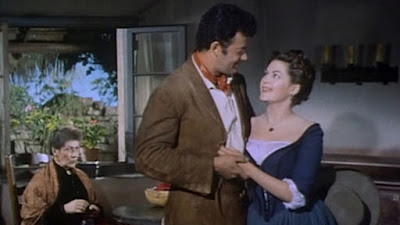 When Juan knows this he is understandably irritated and it becomes a reasonably interesting revenge plot as he hunts down and eliminates the thugs, first thudding a throwing knife into each of their front doors. Lon is the first to go, squealing on the others first, though. 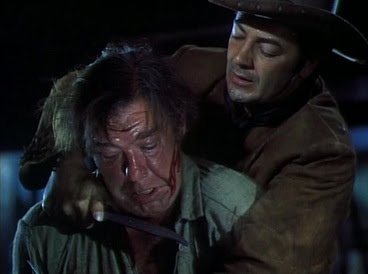 Lon is on his way out

There are two policemen whose job it is to bring Juan in. they are Capt. Rodriguez (a not yet fat, only plump Raymond Burr) and his sergeant (the excellent Anthony Caruso).

Now Wilde (born Kornel Lajos Weisz), a former fencer for the US Olympic team (though sadly he gets no chance to use those skills in this movie) had leapt to fame and an Oscar nomination as Fred Chopin in A Song to Remember in 1945 but though he had a fairly good line in noirs, he didn’t do Westerns. This one, a fourth-billed Army captain in Two Flags West and another Mexican-California picture, Columbia’s California Conquest in 1952, were all he did. But he’s OK as the lead in Passion, I guess. 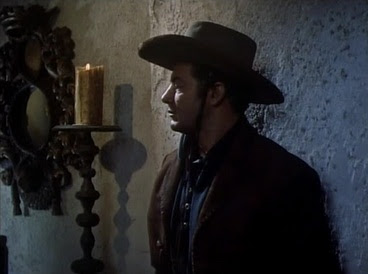 Cornel is the dashing hero

As for Ms. De Carlo, I was never a fan and I think she was largely unsuited to the genre but she would do Westerns. She started with those excruciating 1945 B-movies with Rod Cameron Salome Where She Danced and Frontier Gal, did Black Bart and River Lady with Dan Duryea (the latter with Cameron too), she was The Gal Who Took the West in ’49 and then she was Calamity Jane to Howard Duff’s Sam Bass in Calamity Jane and Sam Bass later the same year. Well, some people like these movies and I mustn’t be snooty. She wasn’t bad in Tomahawk with Van Heflin as Jim Bridger and she starred with Joel McCrea in The San Francisco Story and Border River, which were bearable. She did quite a few TV Western shows and three late features for Producer AC Lyles in the mid-sixties. 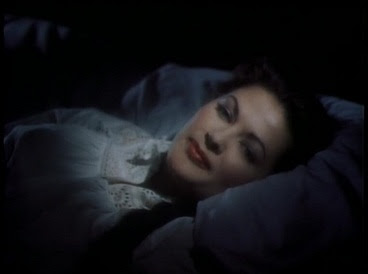 But honestly, the Wilde/De Carlo pairing wasn’t a Western match made in Heaven.

For Ray Burr, there were three years to go yet before he would be Perry Mason (and my Mom’s heart-throb) but in his earlier days he had taken odd jobs as a ranch hand in Roswell, New Mexico and even, it is said, as a deputy sheriff, so he probably felt qualified to do oaters. He’d done four before this one, Code of the West (1947), Station West (1948), New Mexico (1951) and Horizons West (1952), all as baddy. He would do six more afterwards, too, so he seems to have liked the format. Here he is a cop in the pocket of the rich landowner but he comes round to doing the decent thing. He hurt his leg while filming so they rewrote the script a bit to explain his limp. 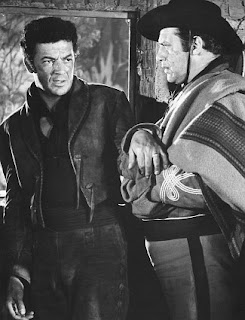 His sidekick Sgt. Caruso is great (he always was). He did wagonloads of TV Westerns – he appeared in pretty well every series you care to name – but also did a few big-screen oaters, starting as uncredited half-breed heavy in with North West Mounted Police in 1940. He was almost always a badman, and supremely good at it he was too. 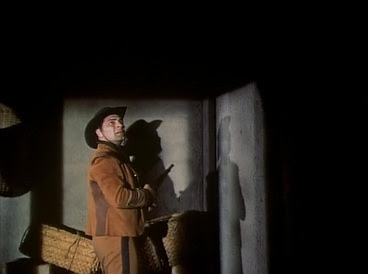 Anthony being a goody: not easy

In smaller parts we get John Dierkes as Juan’s foreman Escobar, Clayton Moore as an uncredited lieutenant and Stuart Whitman as a vaquero who gets too fresh with Antonia and is run off the rancho by Juan with a whip.

With the exception of Acosta the cast wasn’t terribly Mexican and the actors all speak to each other in English, sometimes with fake Spanish accents, and even the signs and notices are in English, so it’s a rather odd 1830s Mexican California. The firearms are also strangely modern.

It was directed by good old Allan Dwan, born 1885, who himself thought he'd directed over 1,400 films, including one-reelers, between his arrival in the industry (circa 1909) and his final picture in 1961. He once said, “If you get your head up above the mob, they try to knock it off. If you stay down, you last forever.” He directed dozens and dozens of Westerns (maybe as many as 160) from The Ranchman’s Vengeance in 1911 to The Restless Breed in 1957, so he knew a thing or two about the genre. 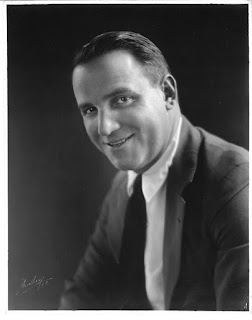 The producer was Benedict Bogeaus (four other Westerns, Silver Lode, Cattle Queen of Montana, Tennessee’s Partner and My Outlaw Brother, the last-named the only one not directed by Dwan). 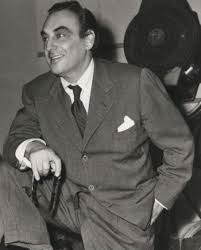 It’s in Technicolor so RKO didn’t stint on that. There’s some quite classy cinematography here and there, by John Alton, who had won an Oscar in ’51.

There’s an action climax on a glacier in a snowstorm (not all staged in the studio) and with several of the traveling pans Dwan was famous for. There’s also a rather good dog, the collie Capito. It all ends happily ever after – no spoiler there. Dark tragedy seems suddenly to give way to bland optimism. 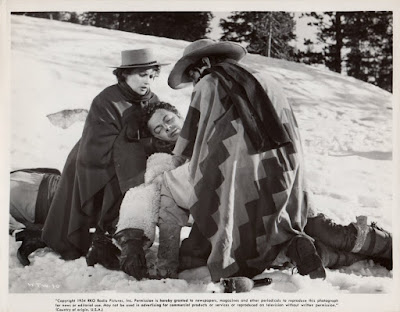 Passion in the snow

Harmless enough entertainment, as long as you are not too demanding. I’d put it in the reasonably classy B department. I kinda wish it had had better leads, though there are some excellent character actors lower down the list, and visually it’s rather fine. I did toy with a three-revolver rating and may have been a bit mean. 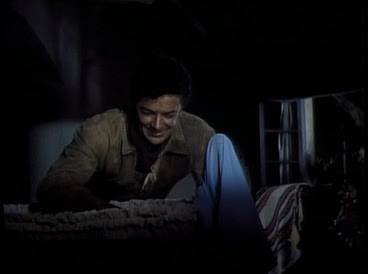