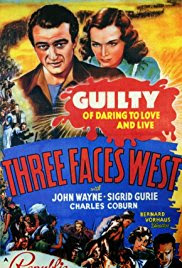 I’m cheating a bit today. I’m reviewing a movie that isn’t a Western. Well, they said it was a Western in the TV guide (I live in France but watch British TV by satellite) and it stars John Wayne. It’s set (mostly) in the West, too, and concerns farmers heading out to Oregon to start a new life. So it’s got Western credentials, in a way. But its alternative title is The Refugee and it’s a contemporary (i.e. 1939) story about a Viennese surgeon and his daughter fleeing post-Anschluss Vienna and being given refuge in the USA.

The title attracted me because one of my favorite Westerns ever, a delightful lesser 1948 picture of Joel McCrea, is Four Faces West. So perhaps this Wayne one would be 75% as good. There was also the 1960 TV show Two Faces West but that was a bit of a flop. Not enough faces. No one ever made a Five Faces West, as far as I am aware.

Three Faces is quite a liberal agenda movie in a way. The US provides sanctuary for those fleeing European persecution and receives rewards for its generosity as doctors with German accents serve rural American communities. These immigrants, whose Jewishness is never explicitly stated, are not poor, huddled masses but highly educated people with much to offer. They still yearn to breathe free, though.

There seem to have been four writers involved, F Hugh Hubert, Joseph Moncure March, Samuel Ornitz and Doris Anderson, all (save Doris perhaps) with rather musically sounding names. They did an interesting job, within their limits. Herbert was himself Viennese-born. The director was Bernard Vorhaus who had made his name in England and become famous for The Last Journey in 1936, a very English film. David Lean called Vorhaus the greatest influence in his life, so he must have had something. Later Vorhaus was blacklisted and went back to England where he lived until his death in 2000.

Wayne is farmer John Phillips - though he never seems to do any farming - who invites renowned surgeon (Charles Coburn, the portly stage actor who started making motion pictures at the age of sixty) to his mid-Western town. The state is never mentioned though an indistinct map shows it to be vaguely Nebraskaish. Naturally, this doctor has a glam daughter (well, it is a Hollywood movie), Leni, played by Sigrid Gurie - not an actress I knew but then she made no Westerns. The doc is noble, treating the locals, who all seem to be sick, despite being exhausted himself, but the daughter is appalled at the dust-bowl conditions and wants out, right away. 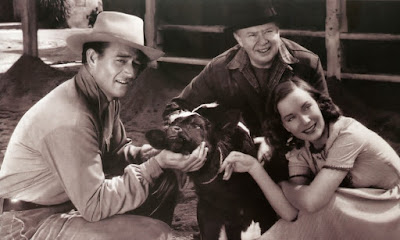 Gradually, though, there’s a reversal as the girl falls for the place and it is Farmer Phillips who gets disillusioned with the future, tries to get the doc and his daughter to go, and determines to set out for Oregon and pastures new (his pastures having all blown away).

It gets more Western now as the motorized wagon train of 30s jalopies sets out westward. I liked the bit where the girl (who is, of course, falling for Phillips) asks what car he has and is told a jalopy. “Oh, it’s Italian, then?” “Yeah,” replies the Westerner, “first cousin to the Isotta-Fraschini.”

And it gets even more Western when surly, unwilling pioneer Clem Higgins (our old pal Trevor Bardette) gets all bolshie and rebellious. He wants to go to California instead, and he whips up some the farmers to revolt. Phillips makes short work of him, though, running his wagon, I mean van, off the road. 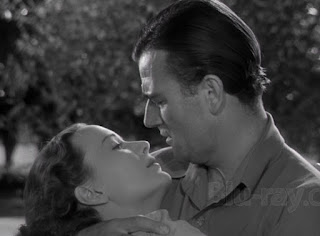 There’s a subplot of Leni’s previous fiancé, back in Europe, who, they believe, sacrificed himself to save their lives. Imagine their shock, therefore, when they find he is in fact alive – and coming to the US. All the more so because Leni is now conflicted, between love for Phillips and loyalty to the ex. Luckily, however, it turns out that this boyfriend (Roland Varno) has become an out-and-out Nazi and so he can be righteously spurned by Leni and her dad, who give him a pro-American dressing-down and then set off back to Oregon to rejoin her lover and the community.

Of course Phillips and his band of westering farmers are now just as much refugees as the doc and his daughter, so they begin to understand each other better. 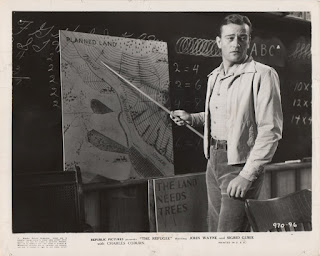 One good thing: there are three appearances by the church minister who is played by none other than Russell Simpson the Great. Obviously. Need a minister or religious elder? Call Russell. Actually, though, he puts on the worst ‘Scots’ accent I think I have ever heard. It’s hilariously bad.

He is joined on the comic-relief side by the local vet, Nunk Atterbury, who acts as Phillips’s sidekick. I think he said he was John’s uncle at one point. He and John live together (nothing gay, though, you understand). Nunk is played by Spencer Charters, who was, so the IMDb bio tells us, “a burly, moon faced man who got his start in the theater where he basically stayed until 1930. Thereafter, he quickly launched a career as a character actor in movies. His specialty was a lower-to-middle-class worker, and he portrayed many types, including judges, doctors, clerks, managers, jailers, etc.” Charters got small parts in all those Errol Flynn Westerns in the early 40s.

Nunk makes a reference to the abdication of Edward VIII. He disapproves of giving up your duty for the woman you love.

Phillips keeps his leadership role and gets the gal, though. There’s a last-reel wedding under a symbolic tree. It’s all rather bucolic in the end and, dread word, heart-warming.

The movie was released in July 1940 so from Wayne’s point of view comes between Republic’s big Dark Command (April) and his work for John Ford on the (non-Western) The Long Voyage Home (October).

It’s watchable. If you’re in the mood for a black & white non-Western. Or anyway at best a contemporary Western.