All a bit perfunctory 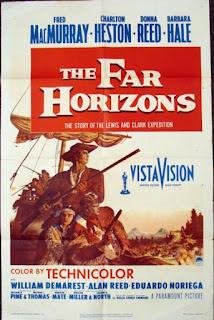 Some would say The Far Horizons is more of a historical drama than a Western and they’d probably be right but let’s give it the benefit of the doubt today and review it on this Western blog. After all, it is set in the nineteenth-century far West and does have attacks by Indians.

Paramount splurged a bit on this picture with big stars, VistaVision and Technicolor (though it was later re-released in black-and-white) and handsome Wyoming locations. That’s about where the spending stopped. Still, the movie did create a stir as a ‘big’ picture.

It is, as you are doubtless aware, the Lewis and Clark story – surprisingly perhaps the only big Lewis & Clark feature film to date. But it’s 1950s Hollywood, so don’t expect historical accuracy. Not at all. In fact it’s a lot of hooey, though factually an improvement on Charlton Heston’s take on the Pony Express of two years before, one of the most egregious travesties of historical truth ever committed to celluloid. 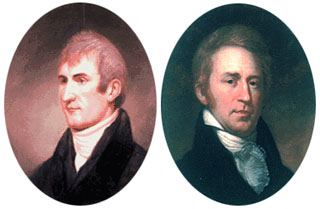 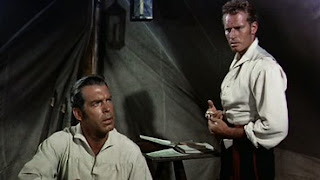 Heston, sour as ever, is William Clark. For such a macho gun-loving type I wonder that Heston didn’t do more Westerns, really. He appeared in ten, which was not a great number for the 50s and 60s he worked in. Many of them were poor or very poor (The Savage, Arrowhead, Pony Express). Major Dundee and The Big Country were potentially good but flawed films, and not helped by his performance in them. Far and away Heston’s best, in fact for me the only Western I think he was really good in, was Will Penny in 1967. He always came across as a bitter or downright unpleasant character, except for his Will Penny. Anyway, in The Far Horizons he is portrayed as the friend of Lewis who unwittingly steals away Lewis’s girl (Barbara Hale) and then falls out with Lewis, partly because of this, on the expedition. 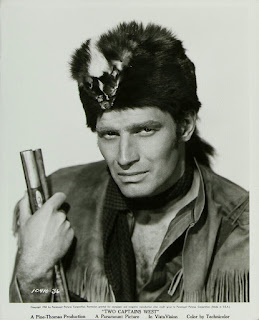 Not the most cheerful or charming chap on screen. I am sure he was very nice really.

Fred MacMurray is the more optimistic and commanding Meriwether Lewis (it is said that he was third choice for the role after Gary Cooper and John Wayne, who both turned it down). Unlike Heston, Fred has a fan in me. I always thought he was good – I’d even say surprisingly good – in Westerns. He made, depending on your definition of a Western, about fourteen, from The Trail of the Lonesome Pine (more of an adventure/romance really) in 1936 to The Oregon Trail (his worst Western) in 1959. Fred was often excellent in the genre, though. 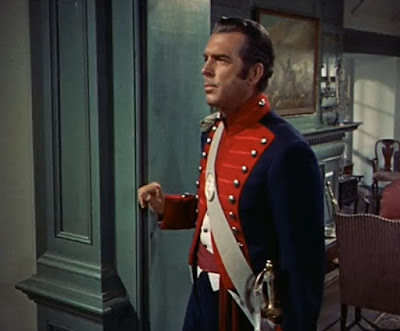 Despite Fred's getting top billing and being in command of the Corps of Discovery Expedition, it’s really Heston who gets most screen time.

Rudolph Maté (left) directed. A cinematographer, he had been an uncredited cameraman on The Westerner in 1940, presumably learning from William Wyler, and had started directing Westerns in 1950 with Branded, an Alan Ladd picture for Paramount, following that with The Mississippi Gambler with Tyrone Power in 1953 and probably his best Western (though it’s only relative), The Violent Men with Glenn Ford, Edward G Robinson and Barbara Stanwyck the year after. The year before Far Horizons he had done the stodgy Siege at Red River with a miscast Van Johnson. It was not a very distinguished Western record. The following year Maté would work with Heston again on Three Violent People, also not very good. He only does a fair job on Far Horizons, trying to keep the pace going (not always succeeding) and endeavoring to make the hokum romance vaguely interesting (an effort destined to fail).

At least the Hans Salter score is occasionally vigorous and stirring. You sometimes think it’s only the music that is.

Maté used Daniel L Fapp (right) as cinematographer. Fapp spent most of his career at Paramount though would win an Oscar for best cinematography on United Artists’ West Side Story in 1961. He also did the visually superb stark black & white noir The Big Clock in 1948. He didn’t do many Westerns (though he was apparently one of the cameramen on the lost 1930 version of The Spoilers, the Gary Cooper one). He made the most of the Jackson Hole and Grand Teton locations on The Far Horizons, though of course a fair bit of the movie was shot on studio sound stages too.

The farrago (for it is a farrago, e-pards) was written by Winston Miller with Edmund North from the 1943 novel Sacajawea of the Shoshones by Della Gould. North is most famous for The Day the Earth Stood Still but did contribute to Westerns, some goodish ones: Destry, Cowboy, Only the Valiant and Colorado Territory for example. Miller, however, was a bigger figure in our noble genre: he had been a child actor in The Iron Horse, had penned B-oaters for the likes of Gene Autry and Roy Rogers, had written and/or produced some excellent little Westerns such as Station West and Fury at Furnace Creek but earned undying Western fame for his screenplay for John Ford’s My Darling Clementine in 1946. It was a great Western career. Fred has to appear in his first scene in very silly silk britches, like grandma’s bloomers, but he soon gets over that. He is the secretary of President Jefferson (Herbert Heyes) at a posh party at the Hancocks and he wants to propose to Julia Hancock (Hale) but Lt. Bill Clark (Heston) arrives and beats him to it. Still, Fred is frightfully decent about it, the best man won and all that. Commissioned by the president to explore the new Louisiana Purchase (it’s 1803), Lewis asks for Clark to accompany him and requests equal rank and joint command of the expedition, I’m not quite sure why. A recipe for disaster, I’d say. But the prez agrees. 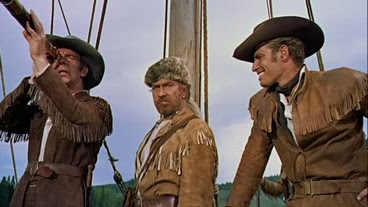 That's Sgt. Demarest in the middle, trying to keep the peace

They have Sergeant William Demarest for a bit of color and semi comic-relief. He is a relief too, now and then, for the principals are a bit on the earnest side. The expedition sets off up the Missouri on their riverboat and they all change into buckskins. It’s getting a bit more Western now. They come upon the village of the Minnetaree Indians whose chief is Ralph Moody. 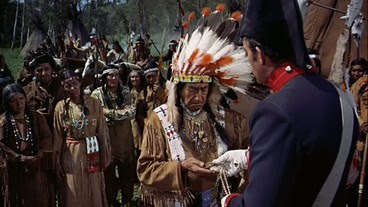 The chief is rather ambiguous about these American arrivals, fearing they are the precursors of many white-eye invaders to come (and he is not wrong). He listens to the counsel of evil, sweaty and unshaven French-Canadian Charbonneau (Alan Reed, no relation to Donna, described by one reviewer as “Fred Flintstone in buckskins”), who also fears Yankee traders and convinces the chief to attack the expedition. The chief contemptuously throws the medal Lewis had given him from the president in the dirt. He’d probably seen High Noon.

A splendid picture of the real Charbonneau

It’s at this village that they meet Sacajawea (as she is called here), blue-eyed Donna Reed in unconvincing heavy make-up, doing her Debra Paget act. She is a Shoshone, captured and working as a slave. She offers to guide the expedition as a way to get back to her people. She falls for Lt. Clark (he’s still a lieutenant, the War Department having lost his promotion) and Clark, despite the glam Julia back home who has accepted him, finds himself reciprocating. Such shocking miscegenation! Once he spots this, Lewis disapproves highly (but then he still holds a candle for the fair Julia). Of course Hollywood taboos on interracial romances doomed the love affair at the outset; we know it will not end well. And given that Maté and the producers (William H Pine and William C Thomas, who together produced 81 pictures for Paramount) decided to make this romance the very heart of the film, it rather doomed the movie too. 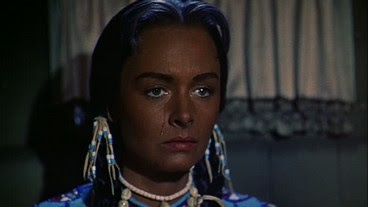 Now all this is baloney. Sacajawea was not a guide; in reality she was little more than an interpreter and reassuring presence. And there is no evidence whatsoever that she had an affair with Clark. Later, the movie Lewis conveniently tears the relevant five pages out of his journal to keep the affair all decently under wraps, so that’s why there’s no record of it, you see. But Hollywood had to have a bit of romance, n’est-ce pas? 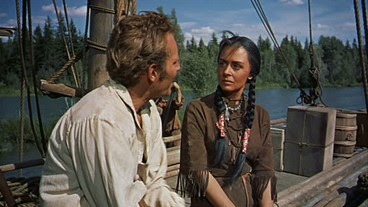 Toussaint Charbonneau was in fact a member of the expedition, not its enemy, and Sacajawea was his woman. Shortly after joining Lewis and Clark she gave birth to a baby, Jean-Baptiste Charbonneau. Clark referred to Charbonneau and Sacajawea in his journal dismissively as “Interpreter & Squar”. In the movie, after the expedition Sacajawea accompanies Clark to Washington DC (which she did not), is presented there to President Jefferson in what they call "the White House" (it wasn't known as that then) and it is the president who arranges her discreet departure back to her people, provoking much boo-hooing from (now) Capt. Clark. The future of sad Julia, disillusioned by her former beau, is not mentioned (in fact Clark married her and they had five children).

In 2011, Time Magazine rated The Far Horizons as one of the top ten most historically misleading films, and they had a point. Still, we don’t watch such movies for historical accuracy. You want history? Read a history book. 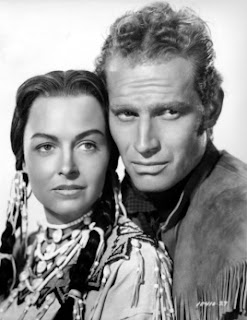 Believe it if you will

There’s some movie action, with various Indians attacking, a desperate fight in canoes, natural hazards, fever and so on. Various expedition members are killed (in fact only one died, and that from a ruptured appendix three months after the departure). Lewis is especially brave and resourceful. But there are definitely tedious bits. And some pretty clunky dialogue:
"Look at all the elk!"
"Sure are a lot of 'em!"
(Shot of about five distant elk).

There’s no sense of wonder or of the new. They just seem to take everything as normal. It is instead a perfunctory manifest destiny statement, with Lewis blandly assuming sovereignty for the United States of the whole continent. “This is a picture of my chief,” he says at one point to an Indian. “He’s your chief too, now.”

In no time they get to the Pacific. Peezy. Right, back to Washington, they seem to say, as if Maté can’t wait to return to drawing rooms and tailcoats. Lewis and Clark are back in DC in a trice, looking as if they have just been out for an afternoon stroll, with no signs of fatigue at all.

If you’re not too fussy you might enjoy it.

The New York Times was uncomplimentary: “A surprisingly dull account of the Lewis and Clark wilderness trek, Paramount's ‘The Far Horizons’ landed at the Criterion yesterday with a hollow thud.” French critic Erick Maurel said it was “un film non seulement paresseux et ennuyeux, platement filmé et mal rythmé, mais également plutôt réactionnaire” (a film that is not only lazy and boring, flat in its filming and with bad rhythm, but also rather reactionary.”)

Given the astonishing achievement of the expedition one feels that a film of it ought to have been grandly epic. The Far Horizons is, however, all rather turgid.

All in all you might prefer Ken Burns's 1997 documentary Lewis & Clark: The Journey of the Corps of Discovery. It’s actually more dramatic. Or, if you want something more Western, The Big Sky, which was (vaguely) inspired by the expedition, Elizabeth Threatt’s Teal Eye character being more than a little Sacajawea-ish.