Monte Hellman and Warren Oates bid adieu to the Western

I don’t like spaghetti westerns but I thought I’d better review this one because it does have some historical and other interest.

For one thing it was the last spaghetti filmed in Almeria. I’ve been there and a lot of the site is all broken down now, though some is doing its best to be a tourist attraction. In its heyday it hosted Sergio Leone’s Dollars trilogy among other movies. 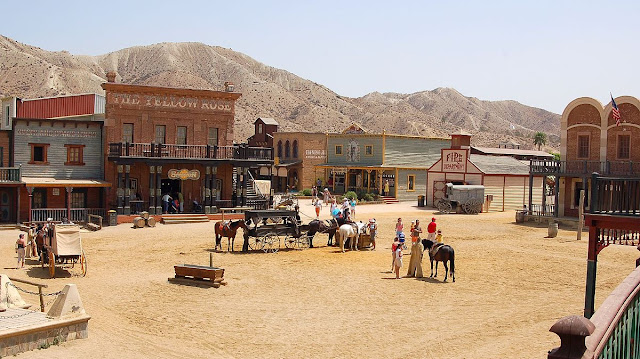 The Andalusian Hollywood in its prime

For another, it was the last ever film released by Allied Artists. AA (formerly Monogram) filed for Chapter 11 in October of ’78 and its back catalog passed to Lorimar/Telepictures and thence to Warners. 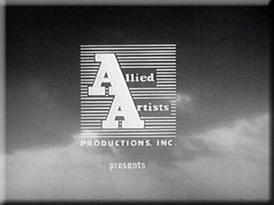 It was a Monte Hellman picture, his last Western – he is given as both as director and one of the producers, though Tony Brandt is also credited as director on some European prints. (Despite his American-sounding name, Mr. Brandt came from Lazio. I think he was second unit director.) Hellman, you may know, studied drama at Stanford and film at UCLA and hooked up with famous B-movie maestro Roger Corman in the late 50s. His oeuvre (posh word, oeuvre) has developed ‘cult’ status, or at least a rep for artiness. He worked a lot with Jack Nicholson and made those two moody Westerns in the mid-60s The Shooting and Ride In the Whirlwind, which we reviewed not that long ago. In 1971 he directed probably his best-known picture, Two-Lane Blacktop with Warren Oates. And he chose Oates again for the Italian-Spanish Western China 9, Liberty 37 in 1978. 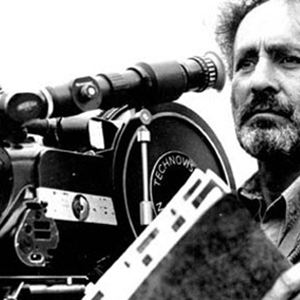 Oates made more Westerns than he did any other genre, though mostly they were TV ones – that was a product of the age he worked in. He appeared in pretty well every Western TV show you care to name at one time or another. His first big-screen Western was a small part as a corporal in the 1959 Clint Walker picture Yellowstone Kelly and that seemed to be that but then he struck gold with Sam Peckinpah’s Ride the High Country in 1962. Doubtless you remember him as one of the five murderous and repulsive white-trash Hammond brothers with a raven on his shoulder. 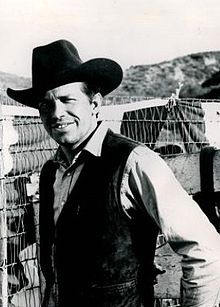 He stayed with Peckinpah for Major Dundee and of course would feature memorably in The Wild Bunch, and he was Alfredo Garcia, whose head was so sought after, in 1974. He was in The Shooting and also in Peter Fonda’s Western The Hired Hand. He was the crazy guy in Barquero in 1970 and in fact Hellman quotes Barquero when he has Oates’s character shoot into the water in China 9. It was a notable Western career in a time when the genre was in full decline. China 9 would be his last Western and he died in 1982 of a heart attack, aged only 53.

The other star is Fabio Testi. One good thing about this spaghetti is that the dialogue was not post-dubbed, though the sound effects were – stupidly loud clip-clops and so on. The downside of that is that Sig. Testi’s Italian accent when speaking English is so strong (and the sound so poor) that you occasionally need subtitles. Testi was famous for his part in Vittorio De Sica’s The Garden of the Finzi-Continis in 1970. Before China 9 he had appeared in twelve spaghetti westerns, leading in five of them. Testi’s hat is a bit Buck Jones-ish. 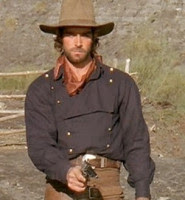 Talking about the sound, it is pretty awful on China 9. Italian film-makers tended to rely on post-dubbing (reputedly because Cinecittà lay under the flight-path of Fiumicino Airport) and when they recorded direct with boom mikes and so on (at least if this picture is anything to go by) they were hopeless at it. In addition, often the music drowns out the dialogue.

The music is lousy too, cheesy 70s pop ballads bellowed into the microphones and slushy ‘film music’ (more like elevator muzak) of the worst kind. And of course we have a ghastly wailing harmonica in the opening scenes as a hangman makes his way to China (population 132) pretending to play the harmonica, very unconvincingly. All this ‘music’ is ‘credited’ (debited, I’d say) to Pino Donaggio and John Rubinstein. Still, it’s not as bad as Morricone. The best musical part came when the actors have a rather inebriated sing-song at the dinner table outside the ratty ranch house. They weren’t very good singers but why should they be? And it gives the scene added charm.

As for the rest of the cast, we have Jenny Agutter as Oates’s wife, frightfully English but now and then trying out an ‘Irish’ accent (but failing to disguise her cut-glass vowels). She was decorative, in an era when such things were still permitted, and her nude scenes were quite daring for the 1970s. Her character does develop somewhat, as she stabs her husband in the back and leaves him for dead, runs off with glamor-boy Testi (several almost soft-porn love-scenes) but then at the end seems resigned to reconciling with hubby, who somehow survived and seems now curiously solicitous of her welfare. “I ain’t gonna hurt you. Not no more.” Actually, I think it’s quite a romantic film.

And we have Sam Peckinpah, as a dime novelist, giving the public “the lies we all need” and casually stealing a cigar from a blind man. He didn’t appear often as an actor but it had been known. He had been an uncredited bank teller in Wichita, an equally uncredited man in a bar in his Junior Bonner, and was briefly memorable as the undertaker in Pat Garrett & Billy the Kid. There was quite a tradition of a dime novelist/observer appearing in Westerns – one thinks of Saul Rubinek’s WW Beauchamp in Unforgiven, Hurd Hatfield’s Moultrie in The Left-Handed Gun and of course Bob Dylan in Pat Garrett & Billy the Kid. I liked Sam’s hat in China 9. 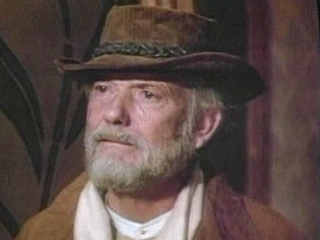 Sam is a dime novelist giving us the Western myth

I didn’t know the rest of the cast. Perhaps they are famous in Europe.

The title is an odd one. Perhaps its oddness was the only point. It is simply what is written on the signpost seen in the first frame which indicates that it is nine miles to China and thirty-seven to Liberty. The story is supposed to be set in south Texas. Liberty is in Missouri and China is in, well, China. But that’s spaghetti westerns for you. In Italy it was known as Amore, Piombo e Furore (Love, Lead and Fury). That was more spaghettiesque. That’s a good word, spaghettiesque. 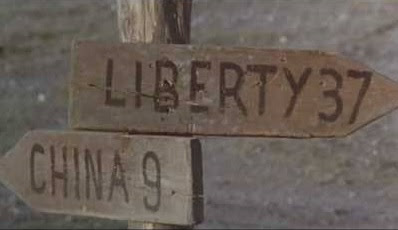 There are some quotations from old Westerns, such as the scaffold, the condemned man spinning cards into a hat in the jail, the scene in the whorehouse, an evil railroad company hiring killers, a derringer in a boot. I enjoyed those bits.

There’s a dwarf and a circus. For some odd reason Italians couldn’t make a Western without acrobats.

A Sharps plays an important part and just occasionally, when wearing his blue shirt, Testi looks a bit like Tom Selleck when using it.

The movie is too long, though (even in the cut version, which is better – though some of the editing is clumsy) and too slow. But that’s Hellman. He didn’t go for shoot-‘em-up action, more for ‘atmosphere’, I’m afraid. Sigh. 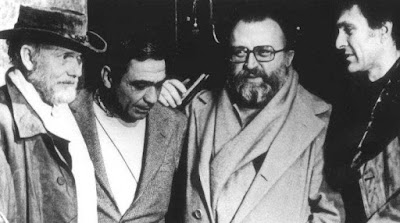 To be fair to China 9, and I do try to be fair (not always succeeding), it is vastly better than the run of spaghetti westerns. Of course the brief heyday of that genre was the late 1960s, then they gave way to those early 70s slightly more mainstream Terence Hill-type junk (which were even worse in my opinion) before dying altogether. By 1978 the boom was long over, and in fact some reverse engineering had taken place whereby spaghetti-influenced American Westerns were being made – the aforementioned Barquero was an example. By the time of China 9 the spaghetti western had nothing more to say, and maybe (though this is stretching it and we don’t want to be pretentious, do we?) the fact that Tesi and Agutter walk away from the dime novelist and his myth-making suggests that the Western as myth was also gone. (It wasn’t, of course). China 9 has some decent acting and makes an attempt at mood and subtlety here and there. I still don’t think it’s a good film or anything like that but well, you know, we’ve definitely seen worse. 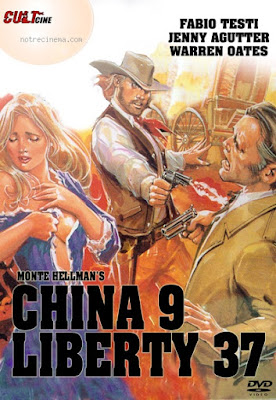