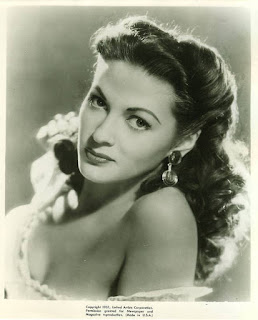 I’m afraid I’m not a great fan of Yvonne De Carlo (left). Famous for being Sephora in The Ten Commandments and not bad as Lily Munster on TV, the Canadian singer was quite unsuited to the Western genre. But she would do them. She made two in 1945, both with fellow Canadian Rod Cameron, Frontier Gal and Salome Where She Danced. They were both drivel – and the second one didn’t even have a comma in the title. I mean, honestly. Two more followed in 1948, Black Bart and River Lady, and they weren’t much better. In 1949 she was the worst ever screen Calamity Jane opposite dreary Howard Duff in Calamity Jane and Sam Bass. It was a highly undistinguished record. About the best oaters she did were the Jim Bridger movie Tomahawk, with Van Heflin as Bridger, in 1951 (at least she didn’t sing) and the Joel McCrea picture Border River in 1954. But it’s only relative.

But enough of this lack of gallantry. I will say that although her second 1949 picture, The Gal Who Took the West, is little more than a silly Western rom-com, it is saved by the excellent performance of two convincing tough guys, John Russell and Scott Brady as the warring O’Hara cousins of Arizona. It also has high Universal production values, with lovely Saguaro National Park locations shot in bright Technicolor by William H Daniels. And there are some very good Western character actors in support. So you could watch it. 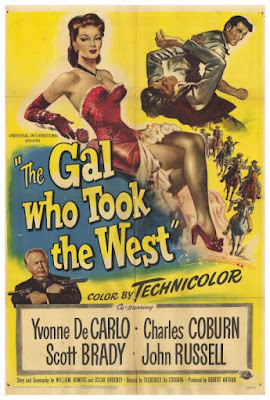 I always liked John Russell. He was, as you know, Marshal Dan Troop in ABC’s Lawman from 1958 – 62 but he also did a lot of big-screen Westerns. This one was only his second (he had been Lengthy in Yellow Sky the year before). He was in Frenchie, Saddle Tramp, Man in the Saddle, The Last Command, Fort Massacre and many others, and always memorable. His last Western was one of his finest, as ruthless mercenary Marshal Stockburn in Clint Eastwood’s Pale Rider in 1985. 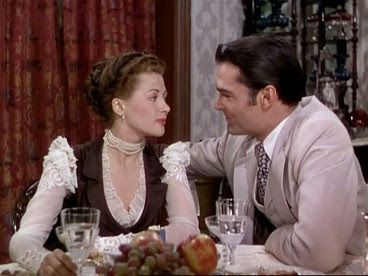 John woos her over dinner

Scott Brady, Lawrence Tierney’s brother, was famously arrested for narcotics possession in 1957 (charges were dropped and Brady maintained that he was framed) and later he was allegedly involved in illegal bookmaking activities but he was a choirboy by comparison to his boozing, brawling brother. In any case he was excellent as a heavy or tough good-guy. He too was a Western TV star, in Shotgun Slade from 1959 to 61 but he too did a good number of feature Westerns. He was Bloody Bill Anderson in Kansas Raiders (1950), the Dancin’ Kid in Johnny Guitar (1954) and that year started leading in Westerns when he was Billy the Kid in Columbia’s The Law vs. Billy the Kid. 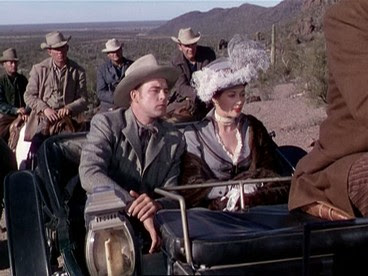 Scott shows her the ranch

Russell and Brady make this picture watchable as the bellicose cousins who both fall for De Carlo. They are believably tough and their fight (staged with no stunt doubles), though doubtless carefully choreographed, looks really good. (Jock Mahoney stunt doubled Brady in other scenes, though). 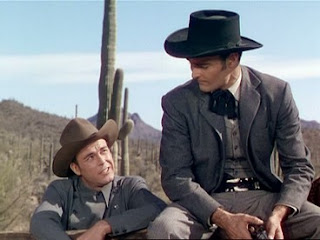 The cousins are at daggers drawn - or sixguns anyway

It’s one of those pictures that starts in the present day (late 1940s, that is) with a journalist interested in the 1880s O’Hara story plying three old-timers with booze to get the lowdown. Good news: said aged gentlemen are played by Clem Bevans, Houseley Stevenson and (wait for it) Russell Simpson! Clem was always excellent as old-timer, with that white hair and lugubrious face, and as for Russell, well, he was totally great – as John Ford understood. The gimmick is that all three tell their tales (in flashback, obviously) and all three, Rashomon style - though a year before Rashomon - are different. The first has De Carlo as a delicate beauty, the second says she was a drunk and the third that she was a gold-digger. 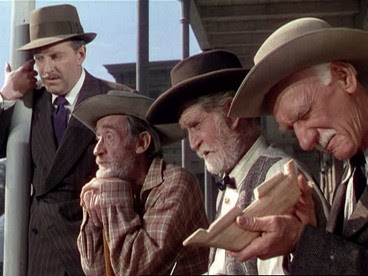 Elsewhere you can spot James Millican as the O’Hara foreman (Clem Bevans’s younger self), John Litel as the Army colonel, Paul Brinegar (Bones from Rawhide) as the uncredited tailor, Jack Perrin as an equally uncredited barfly and, oh joy, Glenn Strange the Great as a cowhand. An excellent line-up.

I must say, to be fair to Ms. De Carlo, her version of Frankie and Johnny was pretty hot.

The whole shebang was directed by the rather grandly named Frederick de Cordova (it was actually his real name), pictured below, Universal’s specialist in musicals and comedies. It was his first Western and he did OK. The following year he would direct De Carlo again in the pirate epic Buccaneer’s Girl. Bet you can't wait to see that one. 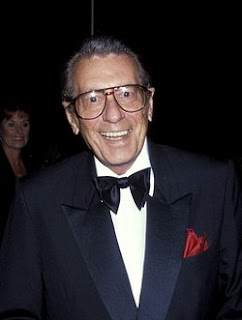 I suppose those of a feminist persuasion might delight in De Carlo holding her own against two alpha males. Maybe. 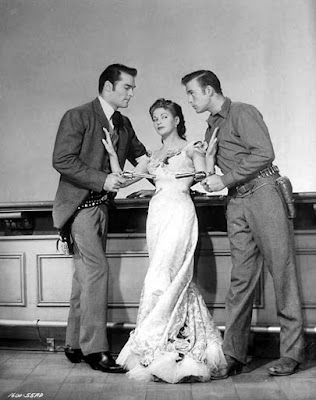 Who will win her hand?