Coming of age on the prairie

Howdy, e-pards. Back from my vacation and posting again.
Embassy Pictures, you probably know, was an American independent film production and distribution company. In the non-Western field (for sadly, that does exist) the outfit even reached the dizzy heights of The Graduate, The Lion in Winter and This is Spinal Tap. The Westerns they made were more modest affairs but they did get a theatrical release. Requiem for a Gunfighter and The Bounty Killer were interesting ‘small’ oaters. Jesse James Meets Frankenstein’s Daughter and Billy the Kid vs. Dracula catered to a particular niche taste. Jory was an early-70s juvenile Western destined inevitably for the TV screen.

It’s a coming-of-age/teen-romance Western, and if that’s your thing you’ll probably enjoy it. It’s not my scene personally and I have to admit I thought it dragged and was too slow, though there was some proper Western action in the last reel. 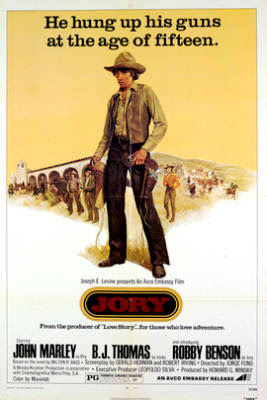 They kinda give away the ending even in the poster

The central character is a fifteen-year-old boy, Jory, played by Bobby Benson (then actually seventeen) but he seems younger, just a skinny kid really. Mr. Benson, now known for Beauty and the Beast and his long hair and goatee, had still, in 1973, to learn the thespian trade, but he does his best, and, as I always say with child actors, you can’t criticize them. It’s amazing they are as good as they are, really. To paraphrase Dr. Johnson, "Sir, a child acting is like a dog's walking on his hind legs. It is not done well; but you are surprised to find it done at all."

Jory’s ma has died and he has come out West from St Louis with his alcoholic lawyer pa to try to find a new life. They arrive in the one-horse town of Santa Rosa. There, his dad plays piano in a saloon for drinks but a bully, an Army corporal (Ted Markland) objects to the Beethoven being played and stabs the pianist to death. As everyone should know, pianists are sacrosanct in saloons and should never be shot or otherwise harmed, but the corporal breaks this rule. Jory is distraught, as indeed who would not be? He is so distraught, in fact, that he goes to ask the corporal why he did it, the soldier attacks him and the boy kills the lout with a rock.

Now he has to get out of town pronto, so he persuades the boss of a horse drive, Roy Starr, to hire him on as a wrangler, and they set off for Texas. Starr is played by one of the ‘big names’ of the cast, John Marley. Marley was, you will remember, Cat Ballou’s father. Probably most famous for sharing his bed with a horse’s head in The Godfather, Marley had parts in a lot of Westerns, big screen and small, from an episode of Cheyenne in 1959 to Vengeance with Lee Van Cleef in 1977. Jory was his penultimate outing in the saddle. His craggy face is memorable. He becomes a father-figure to the young boy.

Texan BJ Thomas, second billed, in his only Western, plays Jory’s pal on the drive, Jocko, a two-gun pistol-twirling quick-draw artist who inevitably ends badly in a ratty saloon along the way. Jory comes to hero-worship the gunslinging wrangler and learns from him all too well how to draw and shoot. Quite interestingly, trail boss Starr tries to counteract this teaching with words of wisdom about the folly of packing pistols. “Guns lead to killing,” he says, and he is proved right. This is food for thought, never more so than today. 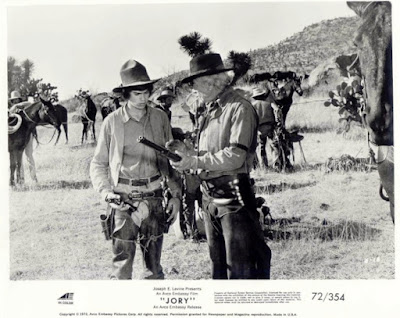 I thought BJ was quite good in the role but of course he it was who sang Raindrops keep falling on my head in Butch Cassidy and the Sundance Kid, so he will certainly be rotting in one of the lower circles of Dante’s Inferno when the time comes (alongside Burt Bacharach).

One nice thing, good old Brad Dexter, one of the unforgettable Magnificent Seven, is in it. He is the saloon yahoo who kills Jocko. I always liked Brad. A regular on TV Western shows, he was also in big-screen oaters such as Last Train from Gun Hill, Invitation to a Gunfighter and The Oklahoman (a Joel McCrea Western I have yet to review; I must get round to that), among others, often in quite small parts but always noticeable. 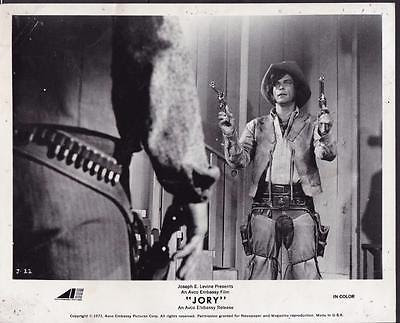 Brad is about to gun down BJ Thomas. Serves BJ right for Raindrops.

There are some nice Durango, Mexico locations shot in color by Jorge Stahl Jr., go-to cinematographer for Westerns filmed in Mexico – one thinks in particular of The Treasure of the Sierra Madre and Garden of Evil.

When they finally get to the ranch, owner John Barron (Todd Martin) inevitably has a daughter, Amy, of about Jory’s age (Linda Purl), so first love blooms. This part is a bit ho-hum. But the pace picks up in the final reel as ruthless rancher rival Thatcher (John Kelly) in a frock coat kidnaps Jory and Amy, the skunk, Roy sets off to rescue them and Barron rides in with a big posse, leading to a major gunfight. 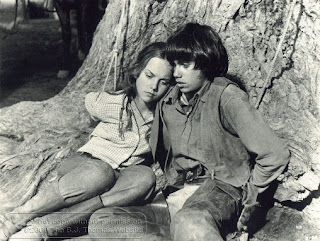 Now, at the end, will Jory stay with Amy, or become a gunfighter, or will he, as his father had schooled him, decide to study law and, forsaking Colt .45s forever, become a respectable citizen? I shall leave you to guess. Inevitably, it finishes with a grim ballad, Jory, crooned over the end-titles.

It’s all pretty harmless, not to say anodyne, but I’ve certainly seen worse.