Sam Elliott does his thing

The Quick and the Dead is a gem of a title for a Western, what with its double meaning of quick, grasped immediately by every self-respecting fan of the genre. Louis L’Amour understood that (as he understood most things Western) when he wrote his 1973 novel with this title. Sam Raimi did too, though the Western movie he made in 1995, The Quick and the Dead, was not connected to the book and was, indeed, very bad. Much more enjoyable is the late-80s HBO offering, with Sam Elliott on perfect form. 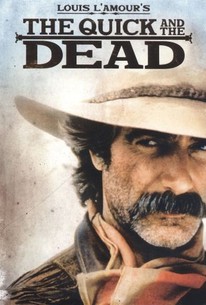 It’s a Wyoming pioneer story, though filmed in Arizona. It's 1876. Brit Tom Conti plays Duncan McKaskel, a Pennsylvanian hardened by the Civil War and vowing never to fire a gun at a man ever again, going out by wagon to join his brother who is with the 7th Cavalry under Custer (we of course know what will happen to the brother but he doesn’t, yet). With him are his wife Susannah (Kate Capshaw, with rather 1980s hair and cosmetics) and their plucky young son Tom (Kenny Morrison). They happen across a one-horse town and meet some very dubious and unsavory characters led by the villainous Doc Shabitt (Matt Clark). Doc and his crew of ne’er-do-wells steal Duncan’s two horses. 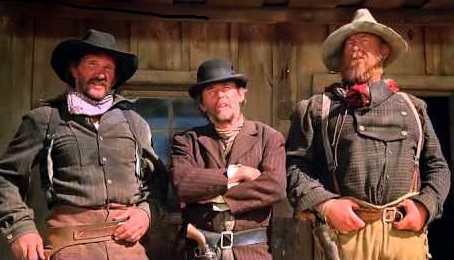 Three of the bad guys. Matt Clark in the middle is their boss.

Little do the outlaws know, though, that half-breed Con Vallian is in the environs. Con’s pa was a mountain man and his ma was a Blackfoot, and he has inherited all the skills of both. He’s a classic L’Amour hero. Vallian is of course played by Sam Elliott, perfect in the part, strong, silent, canny, wise in the ways of the West and with a twinkle in his eye. 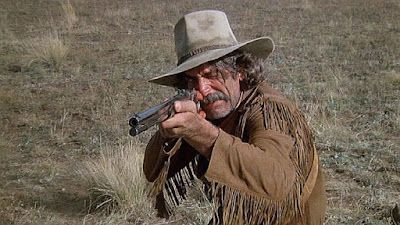 Sam perfect in the part

Con helps Duncan get his horses back. A couple of the outlaws are killed in the fray, including Doc’s only son. Now the gang leader wants vengeance.

That’s about the plot. There’s a sub-plot of a renegade Ute (Patrick Kilpatrick) who, it turns out, slaughtered the inhabitants of a Blackfoot village, including Con’s ma, so as you may imagine Con is implacably on his trail – and he joins up with Doc Shabitt.

Con falls for Susannah and rather naughtily kisses her and watches her showering in her undies in a waterfall. Naughtily considering she loves her husband and tells him so. 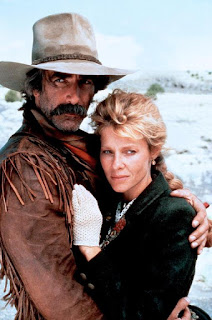 There’s an entertaining and slightly surreal scene of the prairie furnished with Victorian furniture and bric-a-brac when they dump their overheavy load. It is in this open-air parlor that Con will have his showdown with the Ute.

Well, one by one the bandits are eliminated, you will not be surprised to hear. Both Mr. and Mrs. McKaskel show a good deal of Western grit for Easterners, and they earn the respect of the tough guy in buckskins. 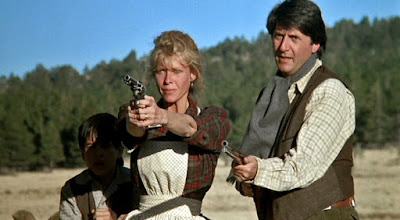 It’s all rather enjoyable. I especially liked it when Sam Elliott announced, “The weak ain’t gonna inherit nothin’ west of Chicago.”