Gangsters on the prairie

I have waffled on elsewhere (here, in fact, and here) about the Western and the gangster movie – their similarities and differences. Certain gangster flicks were virtually Westerns (ever seen Last Man Standing?) and certain Westerns were pretty well gangster movies – all those many oaters, and The Oklahoma Kid is one, in which a crooked saloon owner with henchmen has treed the town. On the printed page there were writers who were masters of both: one thinks of Elmore Leonard and Robert B Parker. You could say of the two genres that they both deal in lead, friend.

But it is also true that as a general rule actors who made it big in crime noirs rarely made the transformation into successful Western stars. You would think they would: both genres are American-hard-boiled. But they didn’t. Edward G Robinson, for example, was Secretary of the Interior Schurz in John Ford’s Cheyenne Autumn, but of course he was playing an Eastern politician there. He was OK in his role as rich rancher husband of Barbara Stanwyck in The Violent Men, but he only did a handful of Westerns, one was a cameo in the gargantuan dud Mackenna's Gold and two of them, Barbary Coast and The Outrage, can only be defined as Westerns by a stretch. In Barbary Coast he was, yup, a gangster. Humphrey Bogart did the splendid The Treasure of the Sierra Madre, of course, and if you count that a Western, well, he was superb, but he only did two ‘real’ Westerns, Virginia City and The Oklahoma Kid, and was utterly unconvincing in Virginia City, while he was only just about bearable in The Oklahoma Kid because he played – yes – a gangster. And as for James Cagney, he only did three, Tribute to a Bad Man (his best), Run for Cover and The Oklahoma Kid, and his build and his quick-fire “dirty rat” Eastern diction didn’t help at all on the prairie. No, I fear they should all probably have stuck to their tuxedos, speakeasies and Chicago typewriters. 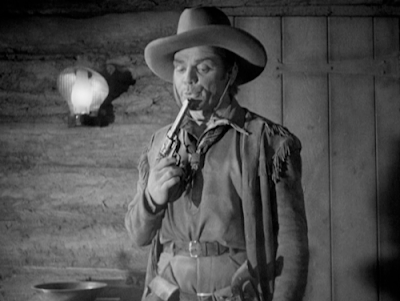 I think he felt obliged to do that

Cagney (billed above the title) and Bogart (billed afterwards under ‘With’) were of course at the height of their fame in the late 30s. Angels with Dirty Faces came out in 1938 and The Roaring Twenties in ’39. Warners probably thought they were onto a winner by giving Jimmy and Bogie Colt sixguns and Stetsons. 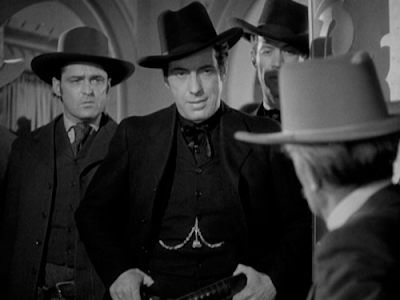 Bogie is a gangster

And of course in 1939 A-Westerns were all the rage again. Fox had started the ball rolling with its big, colorful Jesse James, with Tyrone Power in the lead, and once more there were lines round the block as theater-goers waited to get in to a Western. Universal put James Stewart and Marlene Dietrich in Destry Rides Again, United Artists released John Ford’s Stagecoach with John Wayne, Paramount had Joel McCrea and Barbara Stanwyck nation-building in Union Pacific, and Warners themselves released the brash, noisy Michael Curtiz-directed Dodge City in Technicolor with Errol Flynn and Olivia De Havilland. But the Cagney/Bogart oater was nothing like that.

The studio certainly didn’t stint, it’s not that: although it’s in black & white, it was shot by the great James Wong Howe, a real artist. They had old Oklahoma outlaw Al Jennings on the set as technical adviser. And there was grandiloquent Max Steiner score.

But it’s still pretty bad. Warners got Lloyd Bacon (left) to direct. Bacon did direct some big Warner hits such as 42nd Street and Footlight Parade but he was so overshadowed by Busby Berkeley in those that no one really noticed him. After a career in silent movies as an actor (he was often the heavy in Broncho Billy oaters) he joined Warners in 1925. His ability to bring in a film on time and on budget earned him respect from the five Warner brothers and he was rewarded by becoming the highest paid director on the lot, earning over $200,000 a year throughout the Depression. Westernwise, though, his career was decidedly unstellar. He had directed a sort-of Western in 1938, The Cowboy from Brooklyn, with Dick Powell (another noir actor who didn’t really make the transition) and the clunky The Oklahoma Kid was his second. He’d been an assistant to Ford on My Darling Clementine but doesn’t seem to have learned much and he would later make the turgid The Great Sioux Uprising. I’m afraid that he just didn’t seem to ‘get’ Westerns at all. 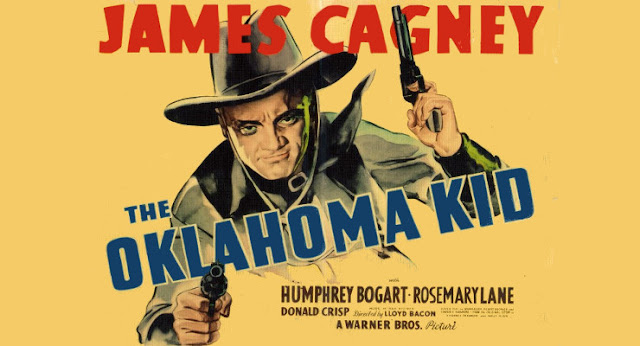 The screenplay (many were credited but it was mostly by Robert Buckner, who worked on some iffy Errol Flynn Westerns too) was weak and amateurish. Variety commented that the picture had “all the unbelievable hoke of a small-time Western”, and they were not far wrong. The movie has its admirers – mostly among Cagney and Bogart fans – but I’m not one of them.

Of course it has its moments. It isn’t all bad. For one thing, Bogart whips out a derringer (just as he had in Virginia City) to shoot a good guy (who had to die because his gal had fallen for Cagney). Any Western in which a crooked saloon boss uses a derringer goes up in my estimation. And there are all manner of character actors, our old friends, to spot and enjoy: Ward Bond is a henchman, and leader of the lynch mob. Trevor Bardette’s there, as another henchman, Indian Joe, John Miljan is Ringo and Edward Pawley is Doolin. Irving Bacon is the hotel clerk. And guess what? Earl Dwire the Great is the relay station man (tragically uncredited). 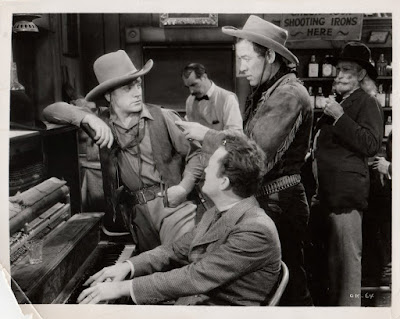 It’s a Cherokee Strip land-rush story. It starts with President Cleveland (Stuart Holmes) acceding to Congress’s request to open up Indian Territory to “American” (i.e. white) settlers, and there follows the usual hokum about boomers and sooners (Bogart is, naturally, one of the latter). The actual mad dash when the starting gun is fired isn’t made quite so much of as was usual in such movies. The scenes are rather perfunctory and there wasn’t even the usual penny-farthing bicycle that always featured. It could be that the footage was lifted from elsewhere. Much of it is speeded-up film, to make the wagons go faster, and some of the characters ‘ride’ those dreadful fake horses in front of back-projection screens that bad Westerns often used.

A father-and-son team of visionary pioneers, John and Ned Kincaid (Hugh Sothern and Harry Stephens) – the dad looking rather like Neville Chamberlain - want to stake out and build a new town, the settlement which will become Tulsa. Crooked Whip McCord (Bogart), dressed all in black so we won’t mistake him for a goody (as if), beats them to the site by leaving the night before and does a deal: the Kincaids can build their town but he, McCord, will run all the saloons and other venues catering to various vices. So Tulsa becomes not a respectable burg but a wide-open den of iniquity. 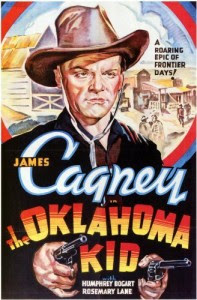 Now, there’s a free-spirited young fellow know n as the Oklahoma Kid (Cagney) who has a rather cavalier attitude to such things as law and propriety. In fact he spots McCord and his henchmen robbing the stage and cleverly robs the robbers, appropriating to himself the silver which was supposed to have gone to the Indians to compensate them for their land. Later, it will turn out that this robbin' hood is not just a wandering outlaw but in fact… Yet nay, I cannot tell you, for Jeff Arnold does not deal in spoilers (hem hem).

At 40, Jimmy was a tad aged to be taking ‘Kid’ parts but never mind, he’s charming and has a winning smile. He also has a song, at the piano, in a rather thin 1930s-ish tenor. Frank Nugent in The New York Times of the day wrote, “Mr. Cagney doesn't urge you to believe him for a second; he's just enjoying himself; and, if you want to trail along, so much the better for you.”

Donald Crisp is the righteous judge. I never took to Mr. Crisp in Westerns – too posh and too Eastern - though he was just about OK as a judge or other senior figure. He had in fact appeared in and/or directed some early silent Westerns between 1911 and ’18 but this was his first ‘modern’ one. He was very unconvincing as the tough lawman in Ramrod in 1947, I thought. He was OK as a rich rancher, which he was in The Man from Laramie, Saddle the Wind, and Whispering Smith (a crooked one there) and he was a judge again in Drango. John Ford liked him a lot as an actor, though not in Westerns – rightly. 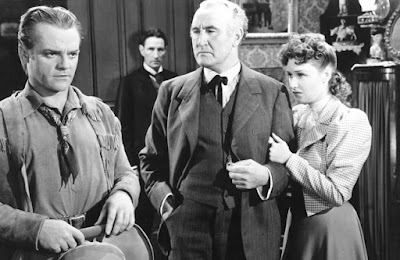 Judge Crisp looks a bit sternly at the Kid

He has a glam daughter, natch, as judges in the West were wont to do. She is Jane (Rosemary Lane, one of the singing Lane sisters, who had worked with Busby B.) who is the intended of the Kincaid boy. But the Oklahoma Kid takes a shine to her. Which fellow will she go for? Well, as Kincaid Jr. is felled by Bogie’s derringer, there are few prizes for guessing, excuse the spoiler. And Kincaid Sr. doesn’t end well, either, for he is the object of the Ward Bond-led lynch mob, though the actual hanging is discreetly not shown (they didn’t want to frighten the horses), only reaction shots as the goody characters look on, appalled.

It’s quite good at the end as the Kid takes what little law there is around there into his own hands and one by one eliminates the gang of ne’er-do-wells.

Oh well, I have seen worse. But I’ve seen a lot better too.