I don’t like Soldier Blue as a Western or as a film but there is no denying that it was a landmark picture, even coming as it did from a small studio. It arrived at a time when revisionism was starting to become a flood. Soldier Blue was released in August. Little Big Man in December that same year showed us a raving megalomaniac Custer completely off his rocker, Doc the following year did a hatchet job on Wyatt Earp, portraying him as a corrupt and creepy politician, and the year after that Dirty Little Billy showed Billy the Kid as a sniveling murderous punk - and so on. 1970 was also the year that Bury My Heart at Wounded Knee was published and became a best-seller. It was obvious that there would be a movie which turned the heroic US Cavalry, which had been shown in countless cavalry Westerns arriving bravely at the last moment to save the settlers ever since Hollywood began, into a loathsome force of racist barbarians.

And then there was Vietnam. The shock waves of the My Lai massacre in 1968 were still reverberating. American casualties reached a peak in 1969. The Kent State shootings took place the same month that Soldier Blue was released.

So we were given a film showing the US Army brutally massacring decent Native Americans, gleefully slaughtering women and children, raping, mutilating, beheading and heaven knows what else.

In fact at Sand Creek Black kettle was flying the American flag. It didn't save his village.

The event, set in 1877, was fictional but there is an explicit reference to Sand Creek (1864) in a voiceover at the end of the picture and there are also unmentioned similarities to Custer’s attack on the Washita (1868). The repulsive Army commander leading the cavalry is fictional, a Colonel Iverson (John Anderson, not holding back) but there are definite echoes of the even more repellent Reverend Colonel Chivington of Sand Creek and of Custer himself.

The film became a cause célèbre for its final shocking scenes, though there was an unpleasant element of exploitative Hollywood gore – Peckinpah without the talent. Brian Garfield in his guide Western Films wrote that the slaughter was “depicted with lip-licking, drooling, voyeuristic explicitness; the film is typically a Joseph E Levine production – expensive and tasteless.”

In reality, though, those final scenes only come after a long, even meandering story of just two people, the only escapees from a Cheyenne attack on an Army patrol, trying to get back to the safety of an Army fort. At very nearly two hours it was too long. The plot wasn’t strong enough to take it, though this tends to be forgotten when the massacre scenes arrive.

The two survivors are not a vulnerable woman and a tough man-who-knows-Indians, as in the classic Western tradition, but the reverse. The star is Candice Bergen as Cresta Lee, a white woman (and her extreme blondness heightens the whiteness) who has been living with the Cheyenne, as one of the wives of their leader Spotted Wolf (Jorge Rivero). She is canny, shrewd and resourceful – and stridently pro-Indian. Her companion is a weepy and largely incompetent young trooper, Honus Gant, played by Peter Strauss, bungling and bumbling across the prairie but gradually learning from the tough woman. Ms. Bergen, pre-Carnal Knowledge and better known at the time for less-than-great campus comedy, was actually quite strong as the foul-mouthed ‘lady’, though the script and her approach were far more 1970s than 1870s. Mr. Strauss was pretty much an unknown and isn’t too bad as the totally bewildered soldier almost unable to cope, though you do sometimes want to shake him.

There’s a slight Rooster Cogburn/Two Mules for Sister Sara vibe as the man is accompanied through the hardships of the West by an apparently unsuited woman who turns out, though, to be competent, but as I said, really this is turned on its head and it’s the woman who leads and the man who eventually shows a bit of ability under the tutelage of his companion.

And unlike those other Westerns, Ms. Bergen’s dress gets skimpier and skimpier as the film progresses. There is almost a soft-porn look to the movie.

Her dress gets smaller and smaller

The picture was directed by Ralph Nelson, better known for his TV work. He only did three big-screen Westerns, this one, the dire The Wrath of God in 1972 and Duel at Diablo (1966), the latter the best. Considering the slow pace of most of Soldier Blue and the rather heavy-handed message, I don’t think we can put Mr. Nelson up on the Mount Parnassus of Western directors (probably somewhere up in the Rockies). 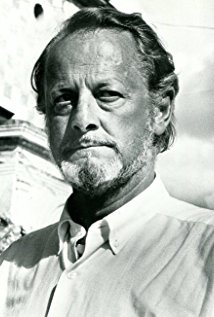 The film is marred by another dreadful performance by Donald Pleasence as Isaac Q Cumber, a seller of guns to the Indians (in Westerns a crime situated on the scale of awfulness somewhere between matricide and cannibalism). Pleasence would insist on doing Westerns, for which he was entirely unsuited, and came close to ruining several with his overacting, such as The Hallelujah Trail (not that he ruined that one because it was already so bad as to be past saving) and Will Penny – a fine Western in which he was abysmal. Brian Garfield, again, talked of “Pleasence, whose mugging performance brings new significance to the word ‘ham’.” Dramatically, too, it’s odd because this Cumber pursues the couple with intent to kill but suddenly gives up the chase and rides away never to be seen again. 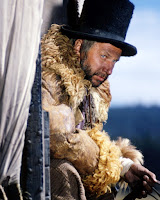 Another weakness of Soldier Blue is summed up by Roger Ebert, in his review of the time:


Although it is pro-Indian, [Soldier Blue] is also white chauvinist. Like "A Man Called Horse," another so-called pro-Indian film, it doesn't have the courage to be about real Indians. The hero in these films somehow has a way of turning out to be white In "A Man Called Horse," Richard Harris was your average English aristocrat, but damned if he couldn't out-hunt, out-fight, out-shoot and out-lead all those Sioux, who made him their chief out of pure gratitude. And now in "Soldier Blue," Candice Bergen is the white girl from New York who "understands" Indians and makes liberal speeches and goes back to warn the tribe when the Cavalry is coming. Nobody who looks authentically Indian gets very close to the camera.


The only exception to that might be Spotted Wolf. But he was played by a Mexican. 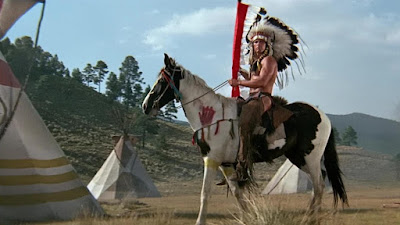 You probably need to see Soldier Blue, once, if you are at all a keen Westernista. But it’s a hard film to like.