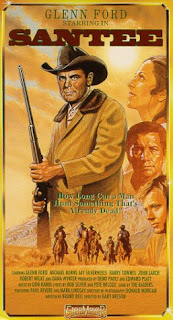 Santee was a late Glenn Ford Western, when he was, if truth be told, showing his age a little. Born in 1916, he wasn’t far off 60. But he still looked fit, and he still had it. As in all his pictures, you can see him riding superbly well. And he brought a convincing toughness to the role of ex-lawman bounty hunter. Ford was certainly a superb Western actor and he lifted even mediocre pictures.

The movie was entirely shot on videotape with TV cameras, unusual then, and transferred to 35 mm for theatrical release in September 1973. In 1975 it was aired by CBS.

It was directed by Gary Nelson, who had been second assistant director on The Searchers and Gunfight at the OK Corral (so he knew what a proper Western was), but who then did TV work. Nelson handled Santee competently, though it does rather have the look and feel of a TV Western.

Actually, for once the French title was better, The Three Arrows (Les Trois Flèches). This is because Ford’s character’s ranch is called the Three Arrows and this has a significance to the plot. On the other hand, Santee, whether the eastern branch of the Sioux, comprising the Mdewakanton, Sisseton-Wahpeton, and Wahpekute peoples, or the part of San Diego or the river in South Carolina, and in this case the name of the bounty hunter, doesn’t really tell us much. 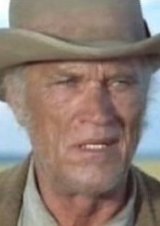 A youth, Jody Deaks (Michael Burns, a former child actor – he was orphan Barnaby West in Wagon Train - who went on to a distinguished career as a historian, writer, and college professor, and is now retired and raising thoroughbred horses in Kentucky) waits in a poor village, observing and being observed, until his pa and three other outlaws ride in and pick him up. Burns was, at 26, probably a shade old for the part. Good news: the dad is Robert J Wilke, one of my all-time favorite Western character actors. I must say, though, if Glenn Ford was looking a bit, well, middle-aged, Bob Wilke (right) looked positively aged. Still, who am I to talk? It wasn’t Wilke’s last outing in the saddle, either: he would still be going in 1979.

The bad news for the outlaws is that Santee is after them. And, in that 1970s way, he doesn’t pull any punches. He shoots two at long range with his rifle then strings the corpses up in a tree to be collected later, then he hunts down the other two, Wilke and Robert Donner, a Clint Eastwood discovery who was a regular on TV Western shows and who later featured in Take a Hard Ride, which we recently reviewed, and dispatches them too. There’s trendy blood in a (very) sub-Peckinpah sort of way.

At first the boy is very cross that his pa has been gunned down and vows to get his revenge on the ruthless bounty hunter (or bounny hunner, as he is called). But Santee takes a shine to the lad and takes him back to his ranch, the Three Arrows, to meet his wife Valerie (Dana Wynter, once apparently called Hollywood's "oasis of elegance," in her only big-screen Western – if a big-screen Western it be) and his foreman John Crow, good old Jay Silverheels, with suspiciously black hair for someone born in 1912. Ms. Wynter is actually rather good as the loving wife and Jay was always reliably enjoyable. However, the scenes at the ranch are over-bucolic and rather cloying, almost with the Hallmark of Disney. 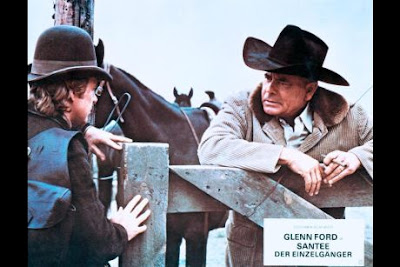 The character development is handled a bit clumsily and implausibly, and that’s probably down to writers Brand Bell and Thomas W Blackburn.

Glenn wears his trademark jeans jacket once back on the ranch, so that’s good. His Jaxonbilt, though, is on the ten-gallon side. You almost feel we are going back to the days of Buck Jones. 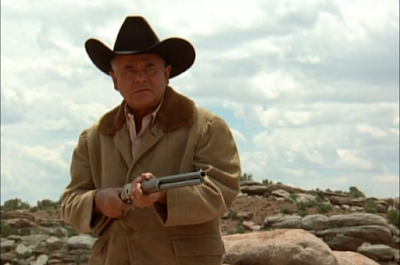 Glenn still had it

Jay explains to Jody the backstory of Santee, and the reason for the Three Arrows brand only having two arrows in it. Jody comes to respect and admire Santee, and in fact becomes a surrogate son.

This is all fine until the vicious outlaw gang who caused all the trouble in the first place (not Bob Wilke’s gang, another one, led by the excellent John Larch) comes back to town, murders Santee’s friend, the sheriff (Harry Townes, a former priest who was another regular of TV Westerns) and robs the bank. Santee has sworn off bounny hunning but when Jody straps on his gun he relents, and the showdown looms in a border brothel. In the ensuing gunfight someone shoots the pianist, a definite no-no in Westerns. 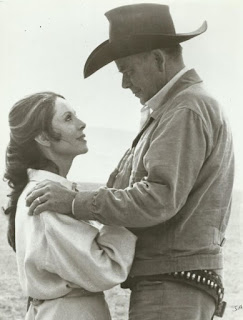 She must have been a child bride, I reckon

There’s a sort of trick ending when at the height of the gunplay, just as Larch is taking aim at our heroes, we get a freeze frame, then see a wagon mournfully bearing a pine box back to the ranch, a tear in Jay Silverheels’s watching eye. But who was driving the wagon and who comprised the contents of the box, you will have to watch the movie to see.

There are pleasant New Mexico locations, nicely shot by Donald Morgan, who would do TNT's 1993 Geronimo.

One thing that disfigures the movie significantly is the dreadful music, especially a ghastly song, Jody, what will you do? The score veers between the inappropriate, the trite and the really annoying.

Still, all in all, you could watch it. In fact if you are a Glenn Ford admirer at all (and any serious Westernista is) you must see it. But don’t expect 3:10 or Jubal or anything like that.

Probably if truth be told a two-revolver Western, I bumped it up to three for Glenn, Jay and the shoot-out in the whorehouse. 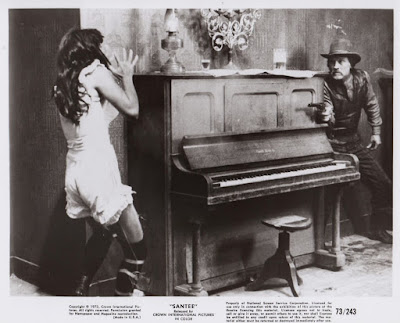