The other day I was reviewing Duel at Diablo and I said that Diablo and Buck and the Preacher were the only Westerns that Sidney Poitier did – more’s the pity because he was good in them. And that’s true, as far as big-screen oaters went. But, as reader Walter Severs pointed out, Sidney did do a TV Western, a two-part mini-series aired by CBS in 1995. So I duly watched that, and, I must say, I rather enjoyed it.

Mr. Poitier was born in 1927, so he could play the young slick gambler in Duel at Diablo, when he was still under forty, and in Buck and the Preacher he was a youthful 45, but by the time of Children of the Dust he was a more grizzled 58, so he plays a hard-bitten and experienced bounty hunter and gunman, and carries it off rather well. He really should have starred in a movie about Bass Reeves: he would have been excellent in that. 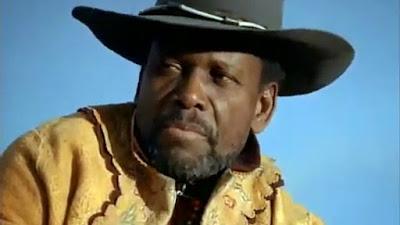 The show was directed by Englishman David Greene: this and an episode of the TV Shane were the only Westerns he essayed, but he did a solid job. There are some pleasant Alberta, Canada locations nicely shot by Ron Orieux. The picture doesn’t look cheap.

It’s 90s-trendy pro-minorities, but that’s not a criticism of course. We start in Oklahoma, 1880 or so. Army scout and interpreter Gypsy Smith (Poitier) saves the young son of a chief when an accidental shot leads to a wild massacre by the soldiers. He delivers the boy to the care of sympathetic Indian agent Maxwell (strong actor Michael Moriarty, who as a rule avoided Westerns, though he was memorable as the decent and courageous miner in Pale Rider). 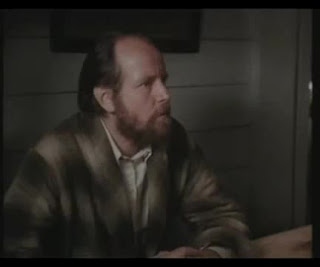 There the agent’s two children Rachel and Dexter choose a name for the boy on a whim, much as they would do for a new family dog, and the three grow up together. The love between more adult Rachel (Joanna Going) and the Indian (Billy Wirth) is somewhat more than fraternal. The agent’s wife Nora (Farah Fawcett) is breaking under the mental strain of frontier life (echoes of The Homesman) and commits suicide; Rachel sees the hanging corpse. 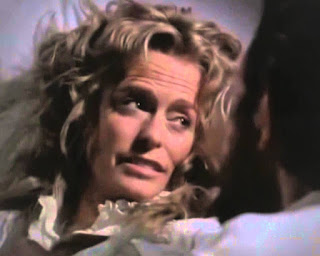 Farah cracks under the strain

Time passes. Rachel comes back from a posh school in St Louis, a lady. Meanwhile the chief’s son has taken the name White Wolf and returned to his people, and ne’er-do-well Dexter (Jim Caviezel), a petty thief, has become the racist deputy of the bigoted and murderous county sheriff (Kevin McNulty).

Now a lady (though still a spoiled brat)

Cimarron Rose makes a brief appearance, impersonated by Grace Zabriskie. Because of her fling with outlaw Bittercreek Newcomb, of Dalton and Doolin Gang fame, Rose Elizabeth Dunn (1878 -1955) was elevated to the status of Western legend, and all sorts of nonsense was purveyed about her (see, for example, Fox’s 1948 movie Belle Starr's Daughter or their '52 picture Rose of Cimarron). She was in fact Oklahoma born and would have been about, though didn’t get involved with Bittercreek and the boys until about 1893 and wouldn’t yet have been a famed outlaw-ess, as in Children of the Dust. She warns Gypsy that the bad guys are after him, and Gypsy blasts them with a shotgun hidden in his bedroll and thanks Rose before she rides off into history. 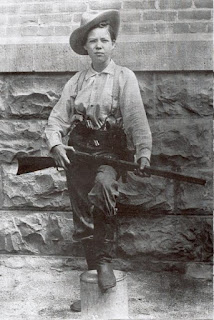 Said to be Rose Dunn

Gypsy accepts the job of guiding a wagon train of “colored” settlers up into the territory for the coming land rush. Naturally he falls in lerve with one of the settlers, Drusilla (Regina Taylor). We have the traditional scenes when the starting gun is fired and with the obligatory speeded-up film we see wagons going too fast and crashing and, of course, the compulsory amusing bicycle taking part in the dash. But it’s just token (the budget wasn’t that big) so don't expect scenes such as in Tumbleweeds or Cimarron.

The town of Freedom is set up, near Guthrie, where Rachel now makes the acquaintance of rich (but obviously crooked) Southerner Shelby Hornbeck (Hart Bochner). She is wooed by the wealth and glamor and agrees to marry him though she still secretly loves White Wolf. This will lead to bloodshed and mayhem. 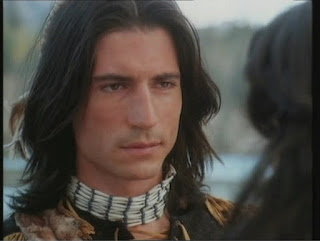 White Wolf loves her but she marries a rich white man

Meanwhile the KKK are active. There are no surprises, though, when the klansmen remove their hoods: all the previously flagged bad guys are there, the county sheriff, his deputy, and of course evil rich man Hornbeck. In fact it is Hornbeck who himself rather explicitly (for a TV movie) castrates our hero. Gypsy goes all moody after that, as indeed who can blame him?

Hornbeck gets his just deserts, though, at the hands of his new wife rather than Gypsy, who, once he has recovered, now hunts down the other klansmen to wreak his vengeance upon them (no blame again). There’s a good bit when Gypsy shoots the sheriff while he is feeding his hogs and leaves him dead with the other swine, but then the man’s wailing wife (now widow) and young son come out and suddenly Gypsy is made to ask himself if he has done the right thing. ‘Course he has. Up at the mansion Rachel uses on her surprised hubby a little pocket pistol very like the one the heroine packs in Louis L’Amour’s Showdown at Yellow Butte and the one Mark Twain had in Roughing It. 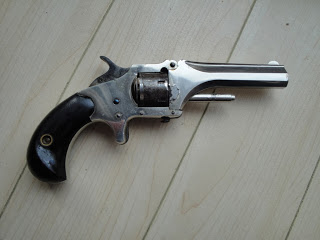 Anyway, after this daring and deadly deed White Wolf spirits Rachel away to a cabin, saying, “Nobody knows this place” but he is wrong because everyone who has watched True Grit (i.e. everyone) knows it; it’s just like Lucky Ned Pepper’s shack on the river. And Gypsy Smith knows it too because he goes right there. “Figured you’d come here,” he says. So much for White Wolf’s secret hideout. They set off for Mexico.

Well, there’s action aplenty from thereon in. Dexter, whose worthless life White Wolf has unwisely spared, gets up a posse and they track Gypsy, White Wolf and Rachel down to a cave very like the one Lee Van Cleef hid in till Henry Fonda routed him out of it in The Tin Star. This one is a very fake cave interior on a studio set, though. They are safe there until the posse brings up a cannon. Uh-oh. But Gypsy says it’s “a good day to die” (alternative title for the movie), quoting Old Lodge Skins in Little Big Man. 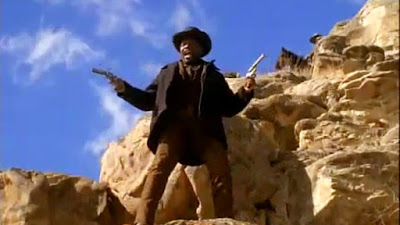 He decides to go out fighting

Well, I enjoyed it.