I really like The Quiet Gun. On one level just a minor black & white B-Western made on a modest budget by Regal Pictures (in “Regalscope”!), it is lifted by the quality of the acting into an interesting, rather dark psychological Western of some quality.

The stand-out is Forrest Tucker as Carl Brandon, the decent sheriff of Rock River, a small Western town. Tucker was a much better Western actor than many have allowed and this was one of his best performances, B-movie or no. He manages to convey decency and courage while at the same time being conflicted and far from certain of himself. He reminds us of Gary Cooper, even, and indeed, there are similarities to High Noon in the plot as the lawman of a Western town (most is shot on sound stages) is obliged because of pusillanimous townsfolk to stand alone against the bad guys - though of course The Quiet Gun is far from High Noon in quality.

It’s an indictment of small-town morality. Pompous and judgmental attorney Steven Hardy (Lewis Martin, a regular on TV Westerns) rails against local rancher Ralph Carpenter (Jim Davis in his umpteenth Western; he’d been at it since 1942, and was well known at the time because of Stories of the Century on TV) because he has separated from his wife and is apparently living with a young Indian woman (Mara Corday, from A Day of Fury). Hardy gets the town council to issue a formal complaint and rides out to serve it. Carpenter is angry. Hot words are exchanged. The attorney grabs a rifle and in self-defense Carpenter shoots him. Now Carpenter is wanted for murder and an undeputized posse – in fact a lynch mob – is out after him.

Jim offends the busybodies by having an Indian mistress

Sheriff Brandon is a good friend of Carpenter’s but he is in love with Carpenter’s estranged wife Teresa (Kathleen Crowley from The Silver Whip). In one way it would be convenient if Carpenter were to fall. But the sheriff will do his duty, and he does all in his power to convince Carpenter to turn himself in. But the lynchers overpower the lawman and hang the rancher.

Behind the scenes there is a classic slimy saloon owner, Reilly (Tom Brown, often that rancher on Gunsmoke) who wants Carpenter’s ranch and he has a sadistic henchman all in black, in the shape of Lee Van Cleef, in a classic performance. There will of course be a last-reel showdown, quite interestingly staged in fact, between the sheriff and these two crooks. 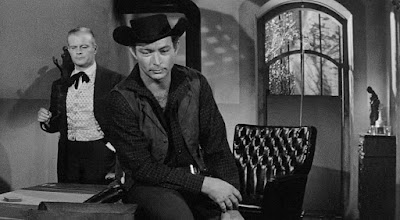 Hank Worden is a simple-minded liveryman who is bullied by Van Cleef, defended by the sheriff and who becomes a loyal deputy. Worden of course specialized in these simpletons and there are (very) faint echoes of the previous year's The Searchers in his role. Normally the bad guy would mistreat a child or animal in the first reel to establish his badness but here he had to make do with Hank.

There is also an entertaining undertaker played by Vince Barnett, that professional insulter and prankster of a comic.

There are some improbable plot twists, it must be said, but they don’t detract too much from the quality. The title is also a bit odd, neither the firearm nor the character of the sheriff being all that silent.

It was directed by William F Claxton (below), a Michael Landon pal who did a lot of Bonanza and Little House on the Prairie epsiodes, who had started as an editor on the 1939 Frontier Marshal and who had directed another black & white B-Western with Tucker the year before, Stagecoach to Fury (click the link to read about that one). 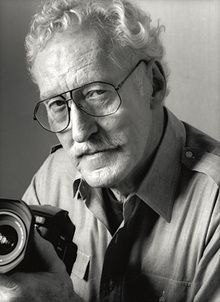