Angst - on screen and off

The other day we reviewed two black & white pictures released by United Artists in 1961, Gun Fight and Gun Street. They were definitely B-movies but that year the same studio released what was very much an A-picture, though still in monochrome, a John Huston-produced and -directed film written by Arthur Miller and starring Clark Gable and Marilyn Monroe.

Is The Misfits a Western? Ah, there’s the rub. When is a Western not a Western? When it is ajar, I hear you respond. But don’t be silly. One thing we can say: even if it is set in the (then) present day and contains trucks and planes, it is very much a treatment of the classic theme of ‘the end of the West’.

In fact of course this theme had been an essential element of the Western myth from its very inception. The first great Western novel, Owen Wister’s The Virginian, was about nothing else. Frederic Remington’s paintings were often nostalgic and elegiac about a time that had passed - look at The Fall of the Cowboy as an example. 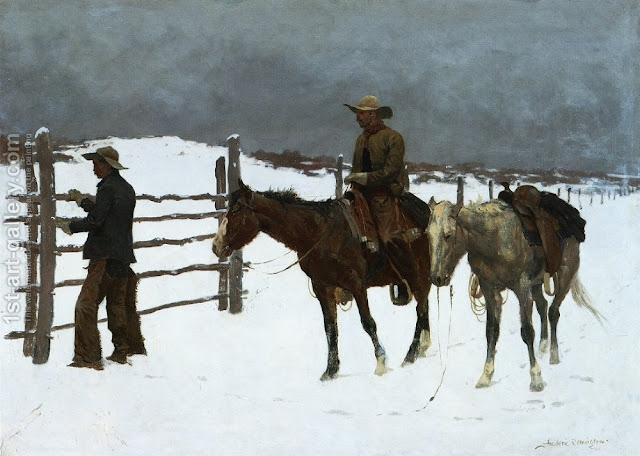 William S Hart stressed this aspect, especially in Tumbleweeds. Zane Grey often waxed romantically lyrical about the passing of the great days of the West. Frederick Jackson Turner’s thesis of the closing of the frontier, universally accepted in its day, reinforced the notion. And the idea continued throughout. Read Glendon Swarthout’s The Shootist (1975). In a way, the ‘end of the West’ has always been an integral part of the myth.

But nowhere will you find a bitterer and sourer treatment of that theme than in The Misfits.

Central to the character of Gay Langland (Gable) is the view he often expresses that “they’ve changed everything around”. There are no more ‘Western’ certainties. He’s a shiftless cowboy with nowhere to go. He has lost his wife. His children hardly ever visit him anymore. Anything is “better than wages” so he loafs about doing this and that, occasionally “mustanging”, that is rounding up some of the few wild horses that are left and selling them to a dealer for dog meat. He renounces even that at the end. 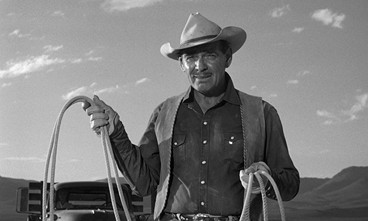 I must say that though I am not a fan of Clark Gable, a rather mechanical actor, and I think he was especially weak in Westerns, he is absolutely superb here as the aging Westerner with roguish charm. His performance is by turns sympathetic, moving and sad. This was his last film: he died shortly after it was wrapped. Robert Mitchum was first choice but he didn’t like the script and turned it down. Or maybe he had unhappy memories of River of No Return with Monroe a few years before, another picture beset by problems with cast and crew.

It was of course also Marilyn Monroe’s last feature. During filming in 1960 her marriage to Miller was on the rocks. They divorced in January 1961, the month the movie was released. This script, which on one level portrayed a woman recently divorced finding a new man and a future, seemed to be almost a farewell gift to her. But she was already in thrall to barbiturates, unstable, and in a decline. She would die the following August. 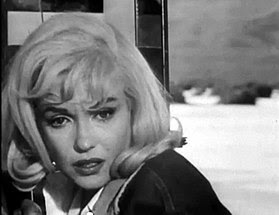 The shooting was beset with Monroe’s absences in detox and her disastrous condition when she was present. She often didn’t know her lines (and the scene where she fails to remember what she was supposed to say at the divorce hearing is telling). Gable was feeling his age and slowing down, and was exhausted and exasperated by his co-star.

And Montgomery Clift, too, as the punch-drunk rodeo star Perce Howland, really a younger version of Langland and ineluctably destined to the same later life, definitely shows signs of the depression, drug abuse and alcoholism that was afflicting him, as well as the results of the terrible car crash he had had in 1956. It was hardly more than a decade since his youthful Matt in Red River (the only other Western he did) and he was only just 40 yet here he looks like a half-crazed middle-aged man. 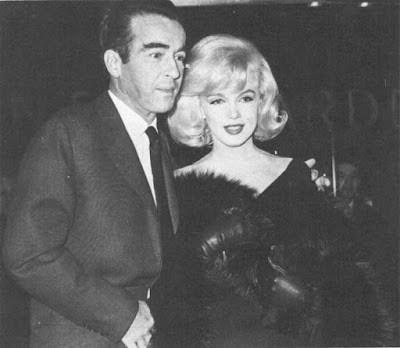 Clift in a bad way

Gable told friends he was working with a bunch of loonies. Huston sometimes arrived drunk on the set – and little wonder, you may say.

Eli Wallach, as the pilot Guido, looking much younger than when he was Calvera in The Magnificent Seven the year before, is one of the best actors on the set. But his character too is a dislocated person, an unhappy widower, mentally scarred by his wartime experiences, pretending to feel what he does not and secretly lusting after the Monroe character. 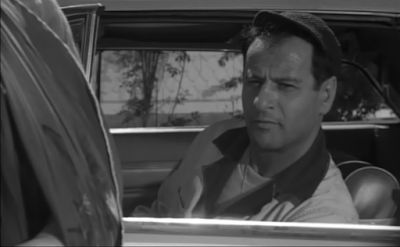 The nearest to a happy and ‘normal’ person in the story is Isabelle (Thelma Ritter, a great actress) but even she is a divorcée who helps others with their divorces, and a person almost camping out in Reno rather than truly living there. 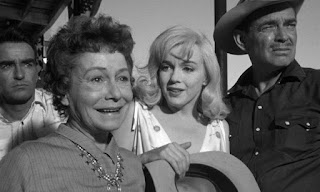 They are not a well-adjusted bunch…

Justin Kwedi on the site DVD Classik suggests that “Le western crépusculaire et post-moderne naît en partie ici” (the crepuscular post-modern Western really starts here) and he has a point. The following year we would get the splendid Lonely Are the Brave which had some similarities – though was perhaps more obviously ‘Western’. It was a superior picture in my view. Monsieur Kwedi adds, of The Misfits: “L’Ouest est un cimetière, un mirage dont les héros doivent s’échapper s’ils veulent renaître ; et après l’ouverture idéalisée, Huston capture cet espace d’une façon funèbre à travers les nuances noires ténébreuses de la photo de Russel Metty.” (The West is a cemetery, a mirage which the heroes must escape from if they want to be reborn; and after the idealized opening scenes Huston captures this space in a funereal way with the dark shadows of Russell Metty’s photography). 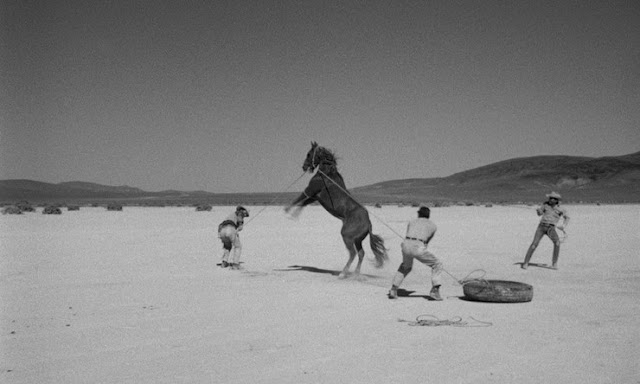 Marilyn's charater is actually right: it is insufferably cruel

Actually, Metty’s cinematography is very fine, and the visual is one of the film’s great strengths. Metty had been filming Westerns since 1931 but many of them were B-pictures and it could be that The Misfists was the best Western he ever did – if Western it be. The black & white was perhaps a curious choice for an A-picture like this in the early 60s but it is certainly very beautiful. 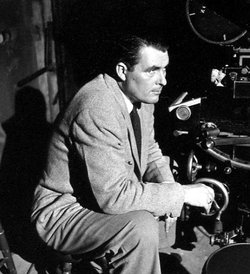 The Alex North music is good, too, haunting and atmospheric.

I’m not sure about the Arthur Miller screenplay, though. Writing for The New Republic, Stanley Kauffmann said that Miller “has done some representative worrying for all of us about certain defects and defeats in contemporary life” but the writing was always theatrical. Here, the characters are supposed to be ‘ordinary’ people, not especially educated, yet Miller makes them super-articulate and even philosophical in their dialectical speeches. What Kauffmann calls “these uncommonly loquacious Westerners” express their neuroses at some length, as if they were Sartre readers on Broadway. At one point Guido says "We're all blind bombardiers . . . Droppin' a bomb is like tellin' a lie - makes everything so quiet afterwards." It just doesn’t ring true. And the suddenly upbeat ending after all this angst does not ring true either. 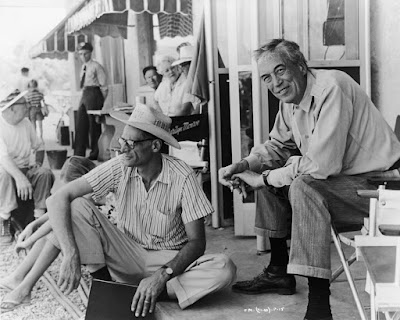 Miller and Huston on the set

The picture premièred in New York (not Nevada) and received a lukewarm reception from the critics. Still, The Misfits is in many ways a fine film, and Huston was a master at using wide open spaces to highlight the vulnerability and loneliness of Western characters – though of course he was not the first to do this. The movie was not even nominated for the Osars. I've given it three revolvers as a Western rather than as a piece of American cinema.