If you make a movie in which every single character is repellent, you won’t find many viewers finding the picture appealing. Quentin Tarantino might have reflected on that when he made The Hateful Eight, a picture which this one tries to emulate in some ways. But Outlaws and Angels (and despite the title there are no angels) is plain nasty. There are no ‘goodies’; everyone is appalling. It is also graphically violent and contains a good deal of sexual assault. It has its qualities but you will need a strong stomach to watch it. 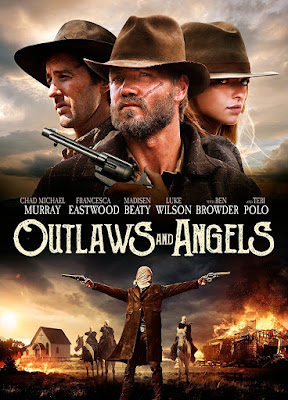 
It’s a ‘siege’ Western, one of those plots where badmen on the run, in this case very violent bank robbers, take over a family’s house. You know it’s going to end in a bloodbath; that’s the kind of movie it is. In the old days Randolph Scott or someone would have been there to stop the bloodshed and, even if a baddy, do the decent thing. But those days are long gone, e-pards, aren’t they. Now rape and murder abound.


Vaguely interesting is the way that the family is slowly discovered to be just as revolting as the outlaws. The mother is afflicted with religious mania and has been complicit in her husband’s incestuous relations with their daughters. These two girls hate each other viscerally. The whole bunch is rotten through and through. 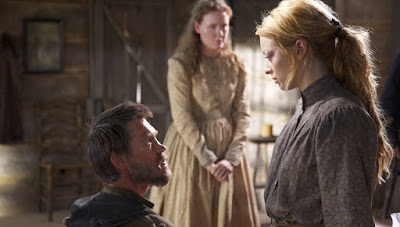 Dripping poison everywhere
As a movie, the picture is weak in several ways. It is too long, for one thing, at nearly two hours. The pace is sluggish. If the dialogue and ‘psychological Western’ aspects were strong enough it might have worked but as it is, the film drags. Gruesome violence provides the only punctuation.


Another problem is the acting. It stars Francesca Eastwood as one of the daughters, Florence. Unfortunately her diction is so bad that she fluffs several key lines, e.g. the one that explains why she so loathed her sister (Madisen Beaty). The lead outlaw Henry is played by Chad Michael Murray and his diction isn’t much better. I needed subtitles for much of the film. Both should really take a few more acting classes or elocution lessons or something.

She is the worst of the lot of them, and that's saying something
Keith Loneker and Nathan Russell are satisfactorily disgusting as gang members, though. Ben Browder and Teri Polo are also OK as the vile parents. At least we could make out what they were saying. 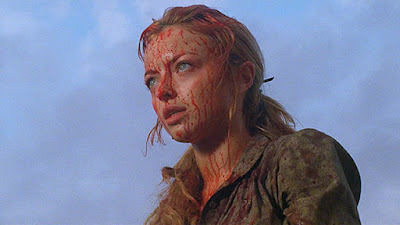 Plenty of gore
The movie was both written and directed by JT Mollner, so quite a bit of the blame should be placed at his door. IMDb tells us that Mr. Mollner has directed numerous commercials and music videos as well some “award-winning shorts”. Outlaws and Angels was his first feature film. It was shot on a very limited budget and it premiered at the Sundance Film Festival on a 35mm Kodak film print in 2016. So it has some art-film credentials (or pretensions). Perhaps it was made as an hilarious Quentinish spaghetti send-up (there certainly are spag influences) and I’m missing the point.

JT
The story really needed some at least vaguely ‘good’ lawmen hunting the outlaws, perhaps to arrive at the last minute, but there is only a ruthless bounty hunter (Luke Wilson) and his Mexican sidekick (Steven Michael Quezada) and they are written out for most of the action. Who the angels of the title were is a mystery. The bounty hunter didn’t have a facial scar so maybe that was to show he was less evil. I’m not expecting a 1950s B-Western or anything but you do need someone to at least vaguely identify with, someone you sort-of hope might get out of it alive. But there’s no one. Good riddance to the lot of them, really. 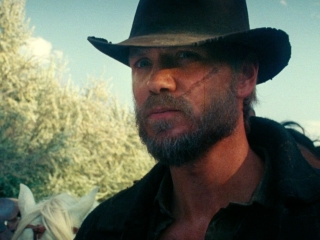 He has a scar so must be the baddy
Francesca Eastwood’s mother Frances Fisher, of Unforgiven (but there’s no Clintish quality in the Western) has a small part as a shrewish wife murdered early on by the gang. She was about the best actor on the set, actually.