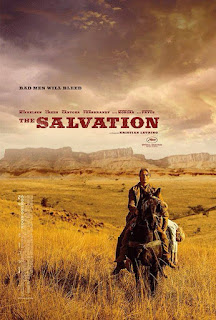 In one way The Salvation is an unusual Western. It is Danish. We don’t get too many Danish Westerns. IMDb says: “Danish Film Director Kristian Levring has produced a distinct body of work. With films ranging from thriller, through period drama, Shakespearean re-imagining and a Western, Levring has crafted an expression that is as visually stunning and unique as it is eclectic.” And it calls star Mads Mikkelson “one of Denmark’s biggest movie actors”, adding “Mads Mikkelsen is a synonym to the great success the Danish film industry has had since the mid-1990s.” And it is shot in South Africa, which manages to look very Western.


In another way, though, it is anything but unusual: the plot is a straight revenge one that we have seen many a time. That’s not necessarily a bad thing. One of the amiable things about Westerns is that they often follow conventions and that makes us, well, comfortable. There is a thin line between respectful quotation and rip-off cliché but most Westerns manage to stay on the right side of it, as does this one.


A nephew gave me the DVD for Christmas, generous fellow, saying that he noticed it wasn’t on my blog so he reckoned I hadn’t seen it. Wow, not only does he give me Westerns, he also reads my blog. Bet you wish you had a nephew like that.


The West of The Salvation is not ultra-realistic or sharply defined, more impressionistic and consciously cinematic. This West is a bleak, forbidding, Nordic place and it is an appropriate setting for a story which concerns crime, punishment and doubtful redemption.


It starts with someone waiting on a train, with faint echoes of High Noon and Once Upon a Time in the West, then a stagecoach trip. Our hero is a Dane, Jon Jensen, a former soldier in the Danish war of 1864 come to the US, and we are told it is now 1871. He meets his wife (Nanna Oland Fabricius) and young son (Toke Lars Bjarke) at the station and they board the stage. But two very bad men evict a married couple from their seats, even though the couple have tickets, taking their place, rather like Richard Boone in Hombre. And these men commit an atrocity, throwing Jensen from the coach, killing the ten-year-old boy and then raping and murdering the wife. Naturally, for this is a Western, Jensen sets off on a quest of revenge, and we sense that he will get it. 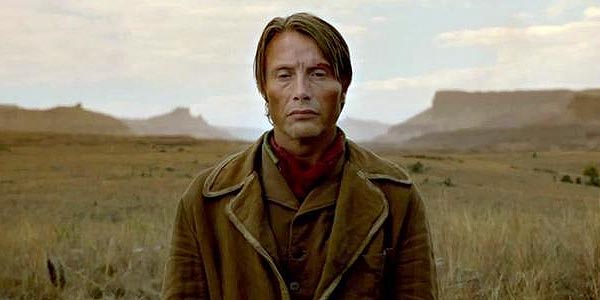 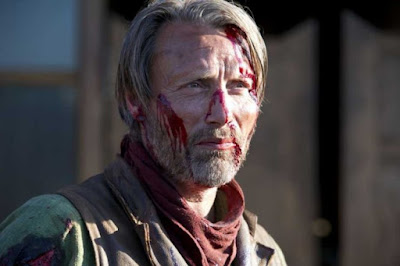 There will be blood


He duly does, shooting and killing the two men. But one of these men is the brother of Delarue (Jeffrey Dean Morgan, whom I recognize but can’t recall where from: anyway, he’s very good). Delarue is the powerful and sadistic boss of Black Creek, the town Jensen now comes to. And Delarue in his turn wants bloody revenge on his brother’s killer (he has a pretty direct way of finding out who that was). One of Delarue’s henchmen is the Corsican, played by Eric Cantona. 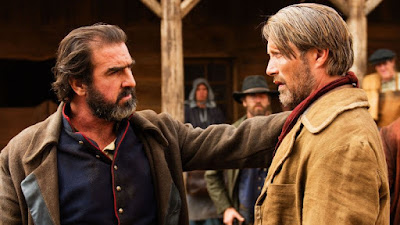 Eric is a henchman
As is befitting a Western, the treed town has a weak and ineffectual sheriff (Douglas Henshall), who is also a pastor, and this spineless creature wriggles about trying to avoid doing the right thing. So does the pusillanimous mayor/undertaker, very well played, I thought, by Jonathan Pryce, quoting Mayor Thomas Mitchell in High Noon. But that great Western notwithstanding, it will not be the sheriff who, single-handed, brings down the evil Delarue It will of course be Jensen. The idea is the same. 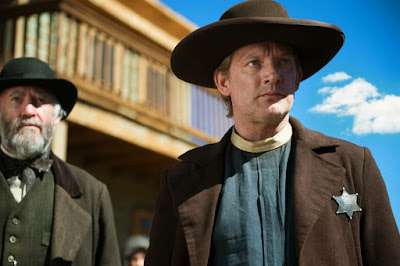 Pryce and Henshall, weak and corrupt mayor and sheriff
Jon Jensen has help, in the shape of his tough brother Peter (Mikael Persbrandt, also very good), but Peter falls prey to the villain and Jon is constrained to stand alone against the tyrant.

Village tyrant
Meanwhile, Delarue has decided to ignore Leviticus: he has designs on his dead brother’s wife, Madelaine (Eva Green), though she has been facially disfigured and her tongue cut out by Indians. It’s a hard and pitiless West, this. She says little but conveys deep loathing with her eyes. And she turns out to be handy with a Winchester… 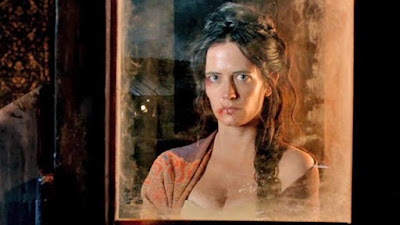 Through a glass darkly
The final come-uppance is well handled, with hints of Pale Rider. Mr. Levring clearly knows his Westerns.


Visually, the film is sumptuous, with a yellow tint to the print that reminded me of Australian Westerns like The Proposition. Maybe it’s the austral light. But it is also rich with reds – and not only the blood. At time there’s almost a Monument Valley look to it and you think of The Searchers. Apparently many of cinematographer Jens Schlosser’s frames were altered with CGI but the effect is powerful and atmospheric. The atmosphere is heightened by the often ethereal music (Kasper Winding) which has appropriate hints of Morricone. 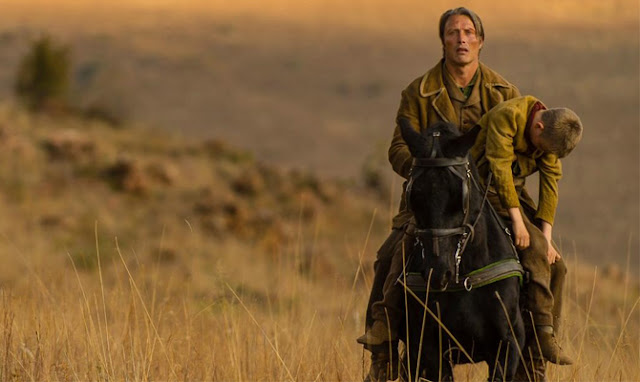 Yellow
It was shown at Cannes. An art film? A tough Western? Somewhere between the two, I’d say. It’s good, though.